Album Review: Bag of Panties, 'Half in the Bag' 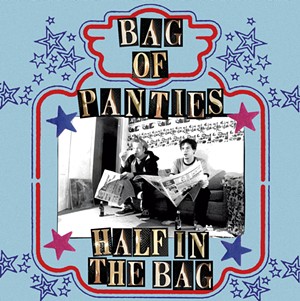 Some two decades afterward, the Burlington rock scene of the 1990s has become the stuff of legend. From the Pants to Envy to Rocketsled to Guppyboy, the bands of that alt-rock heyday are approaching sanctity, their names etched in the marbled pantheon of Queen City greats. Bag of Panties are not one of those bands.

And that's OK! In fact, as their recently reissued 1997 album Half in the Bag suggests, it's actually kind of the point.

For those under the age of 35, Bag of Panties were/are Jason Cooley and Chris Lentz. Both were also members of fabled '90s Burlington punk band the Fags, fronted by a young Eugene Hütz. He's now the leader of famed gypsy punks Gogol Bordello. In 1997, Cooley and Lentz left the Fags. Best friends since high school, the two moved in together and started messing around with a 4-track owned by another roommate, Eric Hutchins, bassist of the Pants. What was intended as a "Happy Flowers-type noise project," according to Cooley, morphed into ... something else.

Cooley, now best known as the front man of Blue Button, describes the record as "very much a friendship album." And that's obvious, though not in an earnest, coming-of-age way. Half in the Bag is a colossally juvenile album, loaded with the sorts of off-color in-jokes that almost all close friends share — especially in their early twenties — but that most have the good sense to keep to themselves. An unrelenting mishmash of styles and samples and dick jokes, the album's sole intention seems to have been to crack up its creators. Indeed, Cooley and Lentz would often work on the album in turns while the other was at work.

But here's the thing: It's pretty damned entertaining.

For instance, take "Theme From Bag of Panties," which is something like a Beastie Boys pastiche as performed by the Jerky Boys. It's epically silly and will certainly offend delicate sensibilities. But in the right mood, it's also hilarious: "You're playin' Tic Tac Toe, you get O's and X's / I'm burning up the panties like Waco, Texas / A lot of people say that I'm pathetic / But I'm making shit run like a diuretic."

MCA is rolling in his grave. But the song does strike a certain adolescent funny boner, er, bone. And that's largely true over the record's 14 cuts.

Stylistically, Half in the Bag is very much of the '90s, though it's a twisted reflection of the decade. For example, "Chris Lentz Is on Food Stamps" sounds like Soul Coughing on bad acid. Bits of Mellow Gold-era Beck, Pure Guava-era Ween and myriad shades of hip-hop are peppered throughout the record. But it's never quite clear if Lentz and Cooley were paying homage to those influences or merely fucking around with them because they could. Maybe both?

Half in the Bag is available at bagofpanties.bandcamp.com. Bag of Panties play a reunion show on Saturday, June 30, at the Monkey House in Winooski with Cave Bees and Blue Button.