Bacon Wars: Why Did the Sneakers Bistro Incident Go Viral? 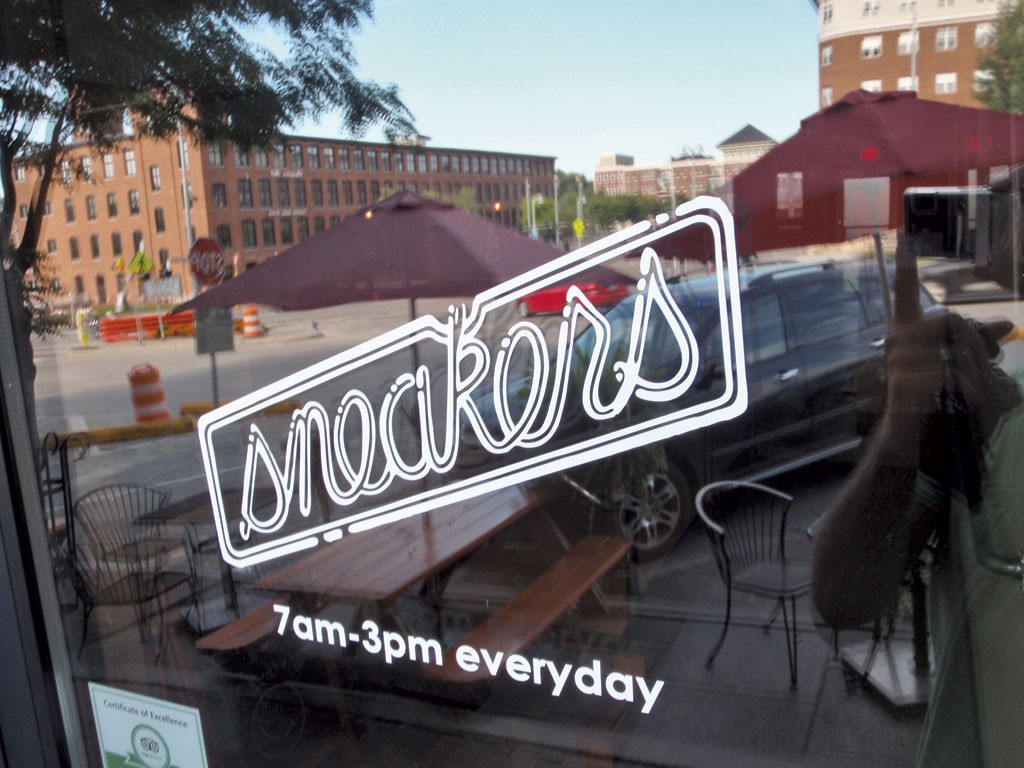 The setting: a community garden. The central character: a respected Winooski businessman who has contributed to just about every charitable cause in the city. His offense: going out of his way to make sure a local resident didn't feel offended.

To recap: Sneakers Bistro & Café owner Marc Dysinger had erected a tongue-in-cheek sign in a community garden that he maintains for Winooski in the downtown traffic circle outside his restaurant. "Yield for Sneakers Bacon," it read.

Last week, a local woman who identified herself as "a vegan and a member of a Muslim household," posted a note on Front Porch Forum suggesting the sign was offensive. She asked that it be removed in consideration of a "large number of Muslim families in Winooski, as well as many others who do not eat pork for a variety of reasons."

Though several other Front Porch commenters politely suggested that the woman was being too sensitive, Dysinger willingly took the sign down.

The tiniest spark can ignite a brushfire of anger on the internet. Two days after she made her case on Front Porch Forum, the bacon controversy blew up.

Conservative outlets and some mainstream media, including the Washington Times, the New York Daily News, CBS Radio and the National Review picked up on the story.

Fueling the coverage was an angry mob of online commenters from across the country taking shots at the funky breakfast joint that has vintage jukeboxes at every table and a line out the door on weekend mornings.

They raged on Facebook: "Gutless, spineless, pukes. Anyone eating at this cesspool of a food establishment may as well join the rest of the jihadists trying to destroy this nation from within. May their faces and bodies be burned and seared with boiling bacon grease!"

"Women in Burkas on cellphones, drinking their Starbucks and driving their Toyotas badly is offensive to me. Bring back the Bacon!"

Some commenters even provided artwork: a cartoon of an animal raping a Muslim man. The journalist James Foley in the moments before he was beheaded by an ISIS terrorist. Two slices of bacon laid out in the shape of a cross.

The commenters vented on Sneakers' Facebook page. When the bistro took its page down, opponents created their own. They bombarded the restaurant with phone calls. They wrote scathing reviews of the bistro on Yelp. They called Winooski City Hall and threatened city officials, who had no role in the issue.

While some media outlets reported the sign protester was a Muslim, giving rise to the anti-Islam vitriol, Winooski City Manager Katherine Decarreau confirmed that she is not. The laid-back administrator also felt compelled to tell a reporter without a hint of irony or humor on Monday morning: "No, we don't have terrorists in our neighborhoods." An hour later, Decarreau issued a press release — the first time she has done so in her five years in office — calling for people to remain calm and act with "respect" for each other.

A Seven Days blog post about the brouhaha drew dozens of online comments. Some were local, but many were from IP addresses in faraway states: California, Alabama, Oregon. While some simply voiced levelheaded criticism of Sneakers taking down a sign they found inoffensive, others posted comments that would make some readers squirm.

"She's hurting," said Decarreau, who has been in touch with the woman. "She didn't realize this is what would happen. If there's a lesson, it's that [online forums] are not the way to deliver a message to an individual or agency. You need to reach out directly to people."

Michael Wood-Lewis of Front Porch Forum agrees. Lamenting the ugly out-of-state reactions to a post that had "too many hallmarks of a sound-bitey, link-bait story," he put a positive spin on it: "There are a lot of bacon conversations going on in Winooski this week. I don't know if it's community building. But it's people talking to each other face to face, which is our goal."

Sneakers' owner, Dysinger, was doing a brisk business Tuesday morning, preparing food for the breakfast crowd. Citing a desire to move on, he declined to comment.

Others spoke up for him, though.

Decarreau ran through some of Dysinger's good deeds: He and his staff had volunteered to paint the city's pool house this summer. He has maintained a community garden on the downtown traffic circle for 10 years and replanted it three times in recent months after wayward drivers destroyed it.

"Whenever we need businesses to step up, they're among the first in line," she said.

Winooski Police Chief Steve McQueen is retiring at the end of the week. He could never have imagined his last public-safety challenge would involve bacon: His officers have been keeping close tabs on the bistro and monitoring threats that have come into city hall, in case hateful rhetoric metastasizes into hateful action.

"We're keeping an extra eye on it," McQueen said.

Nothing has happened. But the online invective has proven beyond anyone's control: The angry mob even turned against a person who initially gave the outraged a platform to vent.

George Imperatore started the "Tell Sneakers Bistro How You Really Feel," Facebook page from his home in New Jersey on Monday after reading about the controversy online.

"I'm just tired of PC run amok," Imperatore said in a phone interview on Monday. "It's not like they had a sign on their front that said, 'We hate Muslims, We won't serve Muslims.' We've reached the point in this country where everyone's position is so rigid that we're missing respect and courtesy these days."

Imperatore said he tried to instill some respect and courtesy on the page, which he launched after Sneakers took down its Facebook page. Imperatore repeatedly urged posters to avoid cursing and threats and "name calling and the other stuff." He appears to have removed a few of the most offensive images from the site.

But they kept coming.

Imperatore even started receiving angry private messages from commenters, prompting him to publicly declare that he didn't work for Sneakers.

He's never even been to Winooski.