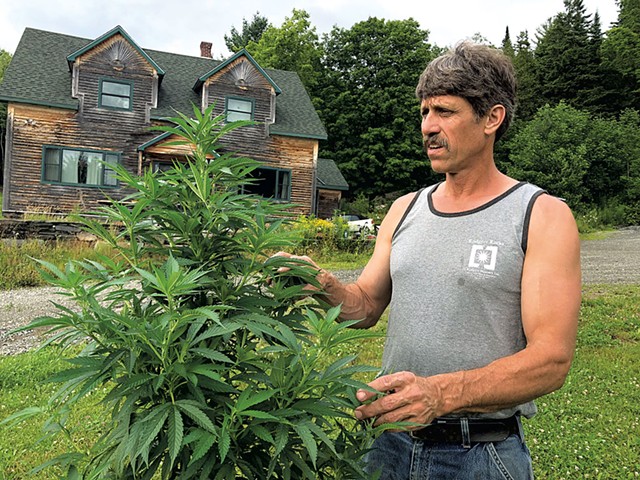 Sen. John Rodgers (D-Essex/Orleans) toyed with the idea of running in the Democratic primary for governor, then backed out, then belatedly jumped into the race after a band of supporters launched a write-in campaign on his behalf. They were drawn to his pro-gun views and blue-collar bona fides.

To get a better understanding of this fickle candidate's appeal, I drove two hours to his Northeast Kingdom homestead in Glover. The stone mason-turned-senator was happy to give a city-dwelling reporter the full rural experience. Untroubled by a steady drizzle, Rodgers backed his camo-print ATV out of the barn. He affectionately calls it his "Beast."

A slapdash wooden frame was holding the windshield together and the whole contraption smelled like gasoline, but the ride was smooth enough at first. En route to his hemp fields, Rodgers made a point of showing off a heap of chicken shit and a pile of granite dust.

As we approached a clearing, he stopped the vehicle in front of a boulder. "What does that rock look like to you?" he asked earnestly.

I "uhhed" and "ummed" and had a flashback to a childhood trip to California during which my aunt tried to get me to find shapes in an abstract Japanese painting.

Rodgers rescued me, explaining he thought it resembled a lizard. We later passed a rock he deemed whale-shaped.

After admiring his roughly 1,200 hemp plants, we headed toward a large hill for a view of the Green Mountains.

We barreled over large bushes and rocks and sloshed through puddles. There wasn't any way of securing myself — the Beast certainly didn't have seat belts — so I clutched the edge of my seat and hoped I wouldn't fall out. I'd brought my notepad, but, needless to say, writing conditions weren't ideal.

When we returned to the cedar house Rodgers had built from scratch, he let me inspect his well-stocked gun cabinet and insisted (OK, I didn't actually need convincing) that I try his CBD products, including a hand lotion, a chocolate butter and an organic "metabolism-boosting" dark-chocolate fudge.

He also showed me his family's holiday card from last year. There were two versions: One featured the entire family wearing plaid, posing with firearms; the other one was identical, sans guns. "That's the one we send to liberals," Rodgers said with a grin.