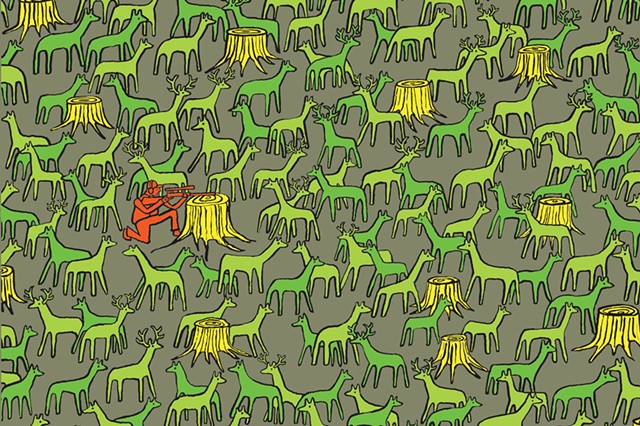 I had to pull three U-turns along a wooded dirt road in Norwich before I finally found Ray Royce Jr.

I was in town to document the impacts of more posted land and fewer hunters on the deer herd and Vermont's forests. Several residents referred me to Royce. If anyone could tell me about the area's waning hunting culture, they promised, it would be him.

But first I had to make it to his home. My Elantra bucked and rattled as I gunned it up his precipitous, washed-out "driveway," which is easier to climb in the winter when the snow fills in the gullies, Royce later told me apologetically.

I found a log cabin at the top and knocked tentatively on the door; I hadn't told Royce I was coming.

Related Up to Here in Deer: As Fewer Vermonters Hunt, the Growing Herd Is Becoming a Problem

Up to Here in Deer: As Fewer Vermonters Hunt, the Growing Herd Is Becoming a Problem
By Katie Jickling
Environment

But when he ushered me inside, I knew I had come to the right place. The walls of the living room were covered in hunting trophies: Two bucks stared out, glassy-eyed. A bear pelt hung on one wall, a fox skin on another.

There were photos of hunters, as well — a 1947 image of Royce's father and his grandfather with a buck, a pic of the camo-clad family during hunting season, a shot from a game camera on his land.

Royce, who was recovering from a hip replacement, settled himself in a recliner by a glowing woodstove. A fluffy little dog he called Rusty jumped up on his lap.

Royce gave me plenty of material for the article, but some of his best tales didn't make it into the story.

He told me about a special heated hunting cabin his family makes available to its senior sportsmen, the oldest of whom is 91. Younger members herd the deer toward them so they can shoot out the window of the hut — "if they stop talking long enough," Royce said with a chuckle.

He mourned his chickens, a dozen of which had been picked off first by an owl, then by a raccoon and a fisher cat. The pelt of the latter was also displayed on the living room wall.

The sole surviving fowl had sought refuge in the trees surrounding the house. Royce had tried — and failed — to knock it from its roost by spraying a hose.

"He's counting his days," he said of the doomed creature.

Royce said he worries about the changes coming to Norwich — "Money's coming in; can't stop it" — but he's accepting of the life-and-death cycle, for animals, humans, even blood sports.

He seemed to find comfort in recollecting the way that hunting season brought the family together, talking about the land he had hunted on since he was a kid and making an occasional joke at his own expense.

For one memorable afternoon, I laughed along with him.