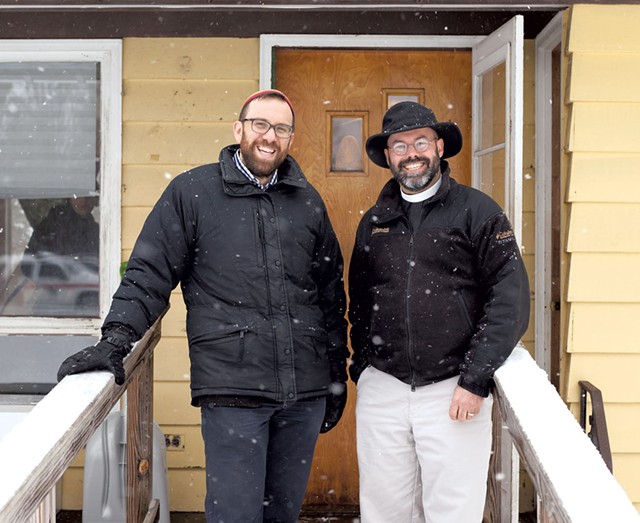 Spend enough time reporting in this small state, and you'll inevitably run into people about whom you have previously written. Certain settings reappear, too.

In April 2016, I wrote about the efforts of Lamoille County Sheriff Roger Marcoux to resettle and rehabilitate a high-risk sex offender. The sheriff hired Timothy Szad to renovate a cluster of buildings he had purchased across the street from his department's Hyde Park office. One of them — a dilapidated home — came to be known as "the Yellow House." Inside, Szad talked with me for hours. I witnessed his physical and spiritual toil.

After the story was published, I kept in touch with both men. I imagined only bad news could bring me back to the scene.

But last March, I found myself trudging back up to the house, which Szad had transformed into a functioning, habitable space. Although Marcoux hadn't managed to lease it to a local business, as he had originally planned, it had been assigned a different purpose: to be a seasonal overnight shelter.

For years, advocates had been trying to make the case that Lamoille County needed a place to put up homeless people.

Marcoux stepped in and offered the Yellow House, rent-free. To head off concerns about public safety, the sheriff pledged that his deputies would keep an eye on the place.

"I'm in the business of protecting the public, and I feel like I'm doing that," Marcoux told me. "Why are people living in cars when I've got a house I'm heating?"

But there were obvious problems. For one, Marcoux's cops couldn't devote entire shifts to staffing the shelter. And neither Marcoux nor any of the homeless groups had any funding to devote to the cause. They hadn't even obtained formal approval from Hyde Park.

So a holy alliance of Lamoille County religious groups — the United Church of Johnson, the Second Congregational Church of Hyde Park and the Jewish Community of Greater Stowe — stepped in, supplying volunteers to staff the shelter and provide food and resources.

Hyde Park authorities hadn't yet issued the permit required to make the shelter permanent, so the Yellow House, which operated last winter and then closed, remained shuttered as recently as mid-December. While Marcoux was working to change that, his religious partners have accommodated some people in need. A Morrisville hotel owner was also helping out.

Szad still plans to improve the Yellow House, one coat of paint at a time.