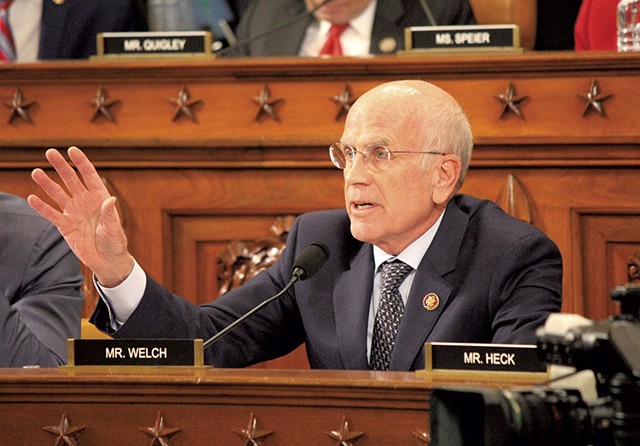 When I traveled to Capitol Hill in November for the first day of the House Intelligence Committee's impeachment hearings, I was hoping to find some color to liven up my report. I didn't expect to find it in a bathroom.

My goal for the day was to shadow U.S. Rep. Peter Welch (D-Vt.), who found himself at the center of the impeachment circus by virtue of his perch on the intel committee. As it turned out, shadowing him mostly entailed sitting in an ornate hearing room, watching Welch watch witnesses testify.

The star of the show that day was William Taylor, the acting American ambassador to Ukraine. His Bronze Star, deep voice and solemn bearing made him an ideal witness for the Democrats: the embodiment of the patriotic civil servant.

Hours into the hearing, the chair called for a brief recess — and I took the opportunity to take a leak. As I waited in line for a urinal in a Longworth House Office Building men's room, I noticed that New York Times reporter Mark Leibovich was standing right behind me. While I went about my, um, business, I heard Leibovich address another relief-seeker as the "star witness."

"I don't know about that star witness thing," the man responded.

As I stepped up to a sink to wash my hands, I realized whom Leibovich had been addressing: Ambassador Taylor himself.

Here was my moment to interrogate the man at the center of it all — the witness who might seal the fate of the presidency.

The only color I found was in my cheeks.