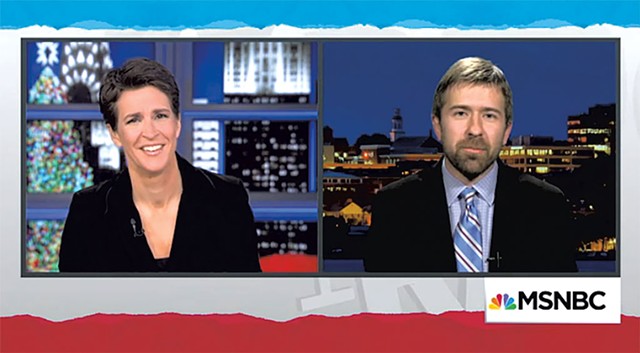 After a long day covering the Vermont legislature last January, I received an unexpected phone call as I hopped in my car outside the Statehouse. It was a booker for MSNBC's "The Rachel Maddow Show." He was frantically searching for a guest for that night's program to discuss the Burlington Police Department's preparations for Republican presidential candidate Donald Trump's upcoming visit to Vermont.

Evidently, he'd tried everyone else in town and had reached the bottom of the booking barrel.

I tried to turn him down. It was 8:20 p.m. There was no way I could make it to the Burlington studio he'd booked in time for a 9 p.m. hit — particularly given the car troubles I was experiencing. Plus, I was in no shape to go on live TV: I was exhausted and hungry, and I knew nothing about the segment's topic.

But the booker was desperate.

As I sped up Interstate 89, I called a handful of Burlington-based reporters — from Seven Days, WCAX-TV and Vermont Public Radio — to see if they could do it. I struck out. My colleague Cathy Resmer insisted I could make it to the studio in time, so I asked her to help me prep by reading me a few news stories about the Trump-ocalypse.

Meanwhile, my rusty old Volvo was making a racket. The bolts on my front left tire were coming loose. "Thump, thump," they complained. "Thump, thump."

As I closed in on Burlington, the booker was calling me every five minutes to monitor my progress.

At around 8:54 p.m., my car started wobbling dangerously as I sped down Main Street, past the University of Vermont. I took a right on South Willard Street and made it a couple more blocks. This is a really bad idea, I thought.

I pulled over, grabbed my jacket and started sprinting — left on Loomis Street, right on School Street, right on Hyde Street. I took a shortcut that would lead me to the back of the parking lot at North End Studios, my destination, not realizing that a chain-link fence stood in the way.

Like the lamest superhero ever (B-list Cable Man?) I tried to leap the fence, but I succeeded only in cutting my hand and wounding my pride. On my second attempt, I climbed onto the hood of a parked SUV and jumped again, this time with more success. I landed in the snow, looked up and saw producer Kevin Hurley standing outside the studio.

I followed Hurley inside, huffing and puffing. He sat me down in front of the camera and mic-ed me up. I looked down at my hand and realized that the cut was deeper than I'd thought. As the show went live, I clasped my hands together and tried to avoid bleeding all over my pants.