Backstory: Strongest Reaction to a Shot in the Arm 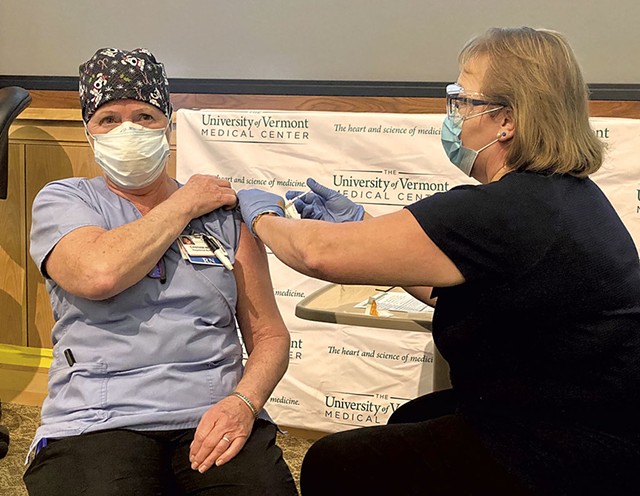 Reporters weren't allowed into the University of Vermont Medical Center to watch Vermont's first COVID-19 vaccination, but the hospital livestreamed the event. So I stood at my kitchen counter, headphones on, taking notes as health officials discussed its momentous nature.

The camera panned to emergency department nurse Cindy Wamsganz, who was seated in front of a plastic banner bearing the hospital's name. She rolled up her sleeve. A nurse swabbed a spot on her upper arm, then plunged in a needle.

Suddenly I was sobbing.

Nine months had passed since I'd returned from a data journalism conference in New Orleans with a long list of planned projects, only to learn that another attendee had tested positive for COVID-19 — unusual news back in early March. I told my coworkers that I'd be self-quarantining at home for the following two weeks. Just a few cases had been identified in Vermont at that point, and it wasn't clear what the public health recommendations were, so I wrote about the experience for Seven Days. I didn't know then that I wouldn't return to the office again in 2020.

Related Nurse Is First Vermonter to Receive a COVID-19 Vaccine

The next months were a blur. As Seven Days' data editor, I've been focused on massive federal and state data sets, spreadsheets with grim tallies, death certificates, and a mind-boggling number of data methodologies. I'm now conversant in the many ways to calculate a test positivity rate, as well as how a person's state of residence is determined for the purposes of federal data collection.

Focusing on COVID-19 statistics day in and day out requires forgetting, on some level, that behind those numbers are people. Each reported death represents an individual with a family, friends and a life story. So each day, I've put on emotional armor.

On that December Tuesday, though, the armor fell away. We were still in the midst of a record-breaking spike in cases, and herd immunity remains a long way off. But we had a vaccine — more than one, actually, developed in record time — that is reported to be highly effective. Distribution had begun for those at highest risk of infection. Watching the hospital scene, I felt something that had been in short supply over much of 2020: hope.

In just seconds, it was over. Wamsganz stood up and looked around the room, alone in the camera frame. The live feed cut out.

And I got to work on my story.