Backstory: Story That Most Changed my Perspective 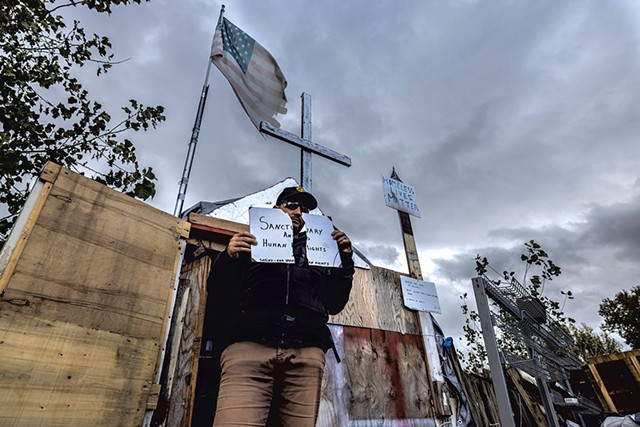 It took me a while to psych myself into going to the Sears Lane homeless encampment on a cold October day. The City of Burlington was in the process of evicting the 40-some campers following arrests related to guns and drugs. According to the city, it wasn't safe at the site; one official told me not to venture there alone. City staff would be there, he said, but wouldn't be responsible for me if anything went awry.

I put on my boots and bundled up against the rain, steeling myself for a potentially dangerous situation. I was nervous. I didn't know then that I'd return to my apartment feeling more uncomfortable than when I'd left.

At the encampment, I met photojournalist James Buck, who had already spent a lot of time with the campers for a photography project he was working on. James often freelances for Seven Days and offered to introduce me to the people he'd met.

I spent hours talking with the residents that afternoon and the following day. They told me about their struggles with addiction and about losing custody of their children. Others explained that it felt impossible to pull themselves out of their self-destructive cycles. Heartbreakingly, one man told me that he doesn't sleep much because he hates waking up.

Related Scenes From Sears Lane: The Final Days at a Homeless Encampment in Burlington’s South End

Scenes From Sears Lane: The Final Days at a Homeless Encampment in Burlington’s South End
By Courtney Lamdin
City

I watched as some campers panicked about where they would go next, while others dug in their heels. I found myself struggling with how to end my interviews, feeling a need to close on something uplifting, on a feeling of hope. But that was hard to find at Sears Lane.

Back at home, I took a hot shower and put on clean clothes. I ordered takeout. When my boyfriend asked about the dazed look on my face, I couldn't find a better explanation than "I feel like I'm on another planet" — one of privilege, with shelter and food and warmth. One that the people I'd just interviewed hadn't visited in a long time.

James, who had spent hours at the camp that week, understood. As someone in recovery, he empathized with the people at Sears Lane and became engrossed with their stories. James has also done a lot of humanitarian work and noted that coming back to "normal" life was akin to the experience of reentry after visiting a developing country. "Burlington felt strange and foreign and shiny," James later reflected. "The camp felt like home."

The more I processed these alien emotions, the more I welcomed them. Feeling uncomfortable — and telling uncomfortable truths — makes me a better journalist and my readers more informed. I'm glad I left the house that day. What I learned from Sears Lane, I will carry with me.