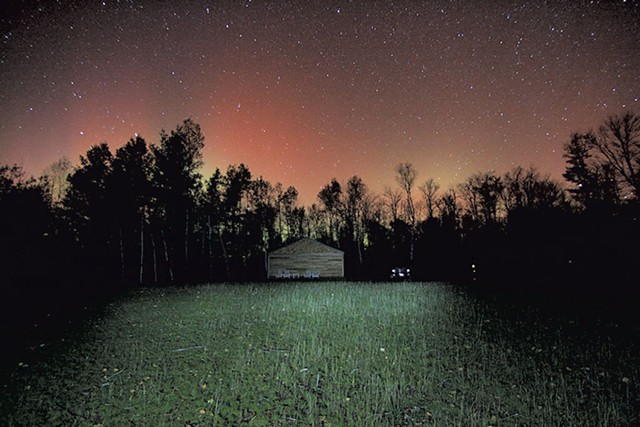 I could've written an entire story about stargazing in the Adirondacks without seeing any stars. After all, I've seen plenty of night skies in my life and know how to describe one. What difference would it make if I were describing the heavens over Tupper Lake, Tahoe or Topeka? Don't tell my editors, but I was briefly tempted, after visiting the Adirondack Sky Center & Observatory under a steady drizzle of rain, to just call it a night and head back across the lake.

But that felt like cheating. I could not honestly write about Adirondack astronomy without getting a look at it, even if the night sky appeared to be like every other one I'd seen. So I rode out the rainstorm with family in the North Country and made plans to try again the next night. After perusing some online forums, I chose Coney Mountain for a nighttime stroll — or, rather, a very dark one-mile hike up a mountain.

You'd think I'd be at home in the woods; I grew up in rural Colorado. But the truth is, hiking alone has always made me uneasy, even in daylight. Whenever possible, I opt for the company of a friend, or at least a dog.

It was dusk when I set out, and there were several long branches propped up at the trailhead that had clearly been used as walking sticks. I grabbed one, imagining I could use it to fend off a bear — or a crazy guy, if necessary. I hoofed it to the top, which is a large slab of rock, zipped up my coat against the unexpected July chill and waited for the stars to appear. It was really, really dark. And aside from several dozen mosquitos and an almost-full moon, I was acutely aware of how alone I was. As the minutes rolled by, my anxiety grew.

By the time the stars peeked out, I thought, Great. Stars, check. And then I hauled back down that mountain, dodging roots and rocks and clutching my heavy Maglite flashlight for dear life.

The whole adrenaline-fueled adventure produced exactly three lines in my story — the lead paragraph, as it turned out. "From the slab of rock atop Coney Mountain, just outside Tupper Lake in the Adirondack Mountains, there is a 360-degree view of the dark. Not a single prick of human-made light is visible on the horizon, beyond occasional headlights on the highway 500 feet below. The only light comes from stars."

And that's the truth.