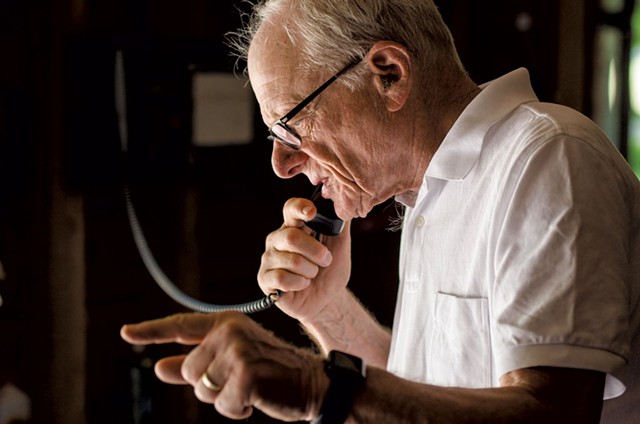 For years I ignored the epic group emails, though I did notice they were also going to Michael Bloomberg and New York Times publisher A.G. Sulzberger. Then came the voicemails — long, profanity-filled rants bad-mouthing journalists, veterinarians and Vermont college presidents. Undeterred by the five-minute time limit, Sandy Lewis would call repeatedly, leaving up to a dozen consecutive messages on my office phone.

On the rare occasions I called back, there was no conversation — just his soliloquy of accusations related to the practice of giving beef cattle antibiotics and its effect on the human gut biome.

That's what Lewis wanted Seven Days to write about. Instead, I was thinking we should profile him — an individual we would dub "the orneriest man in the Adirondacks." The Times had already done it. Web headline: "The Lonely Redemption of Sandy Lewis, Wall Street Provocateur."

There was no shortage of material: a troubled childhood on Park Avenue, boarding school with Bruno Bettelheim. Lewis followed his bond-trading father to Wall Street, where he became an expert in arbitrage. Later, he was busted and pleaded guilty to financial crimes, but a judge all but exonerated him, and he got a pardon from president Bill Clinton.

Relocated to a farm in Essex County, N.Y., Lewis, now 79, hasn't mellowed. He's alienated many of his North Country neighbors. He sued the Adirondack Park Agency — and won.

I was one of three editors who crossed the lake to meet him last January. He was slightly more manageable in person — thanks to his wife, Barbara — and I came away convinced Lewis was a great story.

The next question was: Who could write it? It would have to be an experienced reporter with a high pain threshold and an appreciation for eccentricity. Lewis would eat anyone else alive.

I knew just the journalist: Vermont-based James Bandler. I had watched him go from the Rutland Herald to the Boston Globe to the Wall Street Journal, where he won a Pulitzer Prize. He had written about Wall Street and business. He loved difficult dudes. And, most importantly, he was between jobs.

I pitched him hard, but in the end, it was the free-associating voicemails and emails that sold him. Before long, Bandler was getting them, too. He spent weeks interviewing and doing research on Lewis and, in the end, wrote 5,000 riveting words about the guy. (Bandler is now a senior reporter at ProPublica.)

Lewis loved the piece ... until he didn't.

Two days after it came out, he wanted extra copies for his grandchildren. A month later, he was trashing me and Bandler on the group emails for "wickedly nasty editorial lynching." His beef? One of his friends suggested that the section about his good deeds came too late in the story.

Just before Thanksgiving, the emails and phone calls stopped. I thought I might be off the list but later discovered Lewis was involved in an auto accident at the end of November. His Ford 150 truck was hit while crossing the intersection of Routes 9N and 10. He said he obeyed the stop sign, but a snowbank obscured his view of the approaching car. Lewis suffered no injuries in the crash. The other driver had to go to the hospital. The two vehicles ended up entangled on the front porch of a local taxidermist. Lewis, coincidentally, was transporting a live, caged skunk at the time. The animal survived.

I didn't get off that easy. On a mid-December Saturday at 2:30 a.m., an email arrived with the subject line "An Obsessive Quest." After comparing President Donald Trump to "a most grotesque Goldman writ large," Lewis called me out as "a weak Vermont Mme. Defarge" — a reference to the revenge-thirsty French revolutionary in A Tale of Two Cities. "She slept with her subjects. Publishes a free rag. Loaded with personals."

Let me add: Puts up with a lot of crazy shit for a good story.