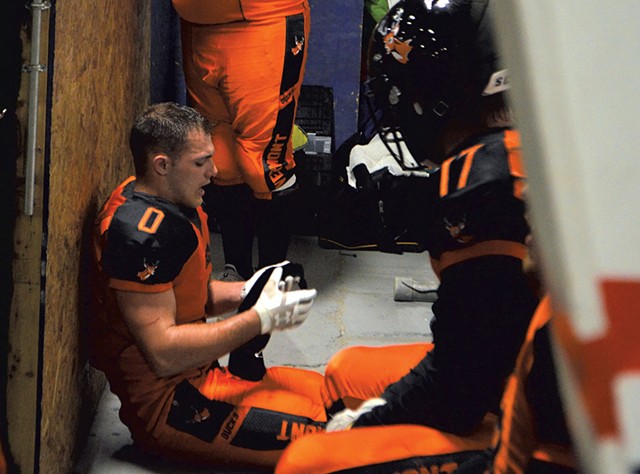 
So much of the physical drama of competitive sports plays out in the field of the imagination, no matter the caliber or stage. A Little League home run is as thrilling as any professional dinger. Football fans feel the euphoria of an end-zone celebration as truly as the dancing receiver. Story lines are as sacred as mythology.


For players, this emotional power can be dangerous, too. To be gripped by a dream is also to be vulnerable — to the weight of failure, and to those who would exploit it.

It was this side of the game that I wanted to explore in following the Vermont Bucks as new owner Joanna Morse sought to revive the local arena football team. The industry itself was, to me, unsavory — home to shady owners who cashed in on low or unpaid (or, in the Bucks' case, paying) athletes who would subject themselves to serious injury for an oversold chance at professional glory.

Morse granted me full access to the team and, to her credit, didn't renege as her plans for the season went sideways. Sideways they went, and quickly.

Among the problems: The Bucks' pay-to-play tryouts didn't produce a full squad even after several extended deadlines. There I was, watching the shorthanded team learn plays each week from the otherwise empty bleachers at the practice facility. I heard a few players rip ass and make crude jokes, but mostly they were polite, focused men. After practice, one of the linemen asked me — sincerely, I think — if I would play on the team.

I'd already been thinking about it as I watched from the sideline. Football was the one sport my mother never let me play as a teenager, fearing the very real risk of concussions. I'm no rabid football fan, but I'm tall and used to have good hands. What if?

I didn't suit up, blaming journalistic independence instead of my poor fitness. But just by posing the question, that lineman redirected my reporting. It helped me appreciate why they were out there, and over the course of the season, I couldn't help but admire the courage it took.

When I rode with the team to their first game in Danvers, Mass., I felt anxious for them. When we arrived to an underwhelming venue, I was frustrated, too. When the first whistle blew, I stood on the team's sideline and wanted to add my voice to their screams.

But when a player I'd been following, Hunter Nunes-Wales, came off the field wincing from an injury, I knew that, as much as I wanted it, I was not on his team. I couldn't help find the absent trainer, or sub in, or even just give Nunes-Wales his space. I had to pick up my camera and capture his pain.