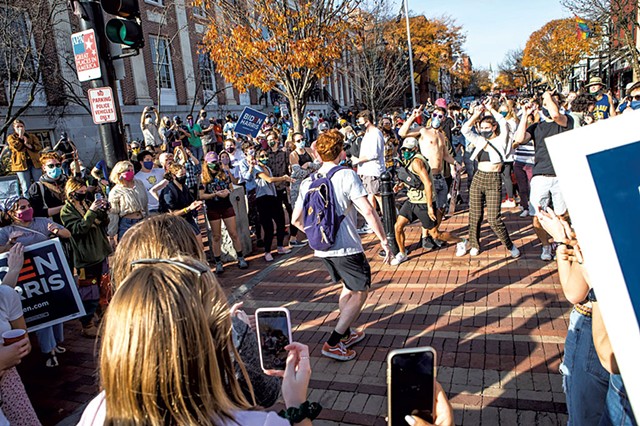 A car raced up Burlington's Main Street toward the University of Vermont, the driver excitedly beeping his horn. Passengers waved and whooped from the windows; one held a Black Lives Matter sign.

As I drove along behind them that Saturday in November, a light bulb turned on in my pandemic-weary, sick-of-2020 mind.

"Can you turn on the radio?" I asked my wife, Carolyn.

If you're like me, around that time, you'd been spending hours each day obsessively checking news websites trying to figure out who had won the presidential election. A step ahead of me, my wife was already on her phone and confirmed, via the New York Times, what I suspected: Major news outlets had just called Pennsylvania — and the election — for Joe Biden.

After Biden Win, Election Celebrations Erupt in Burlington
By Matthew Roy
Off Message

We headed into downtown Burlington, where people were already assembling at Church and Main streets, cheering and hollering. I parked, grabbed my iPhone and left Carolyn in charge of our two dogs so I could capture the historic moment.

Several Seven Days staffers and freelancers contributed images for a slideshow I put together on sevendaysvt.com that afternoon.

Not everyone in Vermont was happy, of course. Terry Allen later sent us her shots from the Statehouse, where Trump supporters sported T-shirts and signs with messages such as "Donald Trump Matters," "#BlackGunsMatter" and "The Media Is Complicit."

Complicit or no, the media wasn't really how I learned that Trump had lost. It was a bunch of college kids in a beat-up SUV who couldn't stop yelling, beeping and waving.