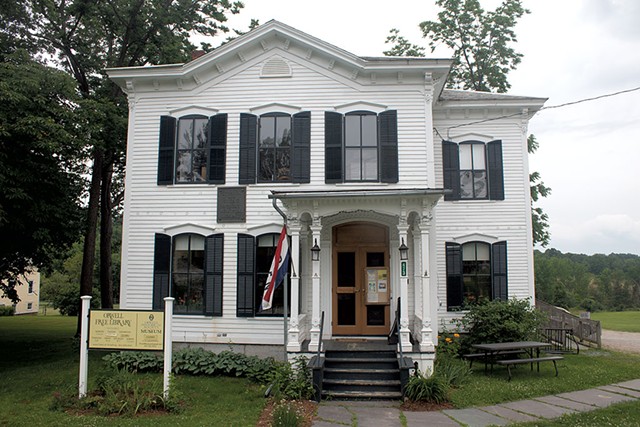 Everyone in Orwell had the same question for me: "Who called you?"

No one had. But that answer was about as convincing as my explanation, which was too boring to be true. I just happened to visit the Town of Orwell website, decided to peruse selectboard meeting minutes, noticed the local history museum was closed and started making calls to find out why.

What I hadn't realized was that the conflict over the Orwell Historical Society Museum had already escalated from what one person called a "stupid" argument over dusty exhibits to what another humorlessly described as a "Mexican standoff." By asking questions, I was stepping into the middle of what was, by small-town standards, a potentially explosive situation.

Each combatant in this cold war over who should clean up a room full of damaged objects and how they should do it seemed to suspect that I was the other's secret weapon. The locals who gave me the benefit of the doubt nonetheless were doubtful that my meddling — what I called reporting — would do anything but ensure mutual destruction.

So I drove there, thinking it'd be harder for townspeople to tell me to get lost when I was standing on their doorstep. And if they did, I could still report the story using town records. They had to give me those.

The truth proved elusive in Orwell. Town officials said they couldn't find most of the documents I requested. A source cut off a conversation midsentence because another person was approaching, and they didn't want to be seen talking to a reporter. One of the standoff participants, Robert Martin, took a particularly forbidding tack; I wouldn't be able to tell an accurate story without the information he possessed, he said, and he wasn't going to give it to me.

Of those directly involved, only the former museum curator eventually agreed to talk, but I was able to confirm the rough outlines of the conflict and publish a story about it.

Martin, my unyielding gatekeeper of the real facts, was unhappy with the result. "Your article did a disservice to those in Orwell who have been working on the issues," he wrote in an email. "Seems to be the problem with today's media — better to go with something, no matter how incomplete or inaccurate, rather than nothing. Sad state of affairs in the Fourth Estate!"

Still, no guns were fired and, as of this writing, Orwell's museum was teasing online that it would be "opening soon." That something's not for nothing.