Backstory: Most Inauspicious Start to a Story 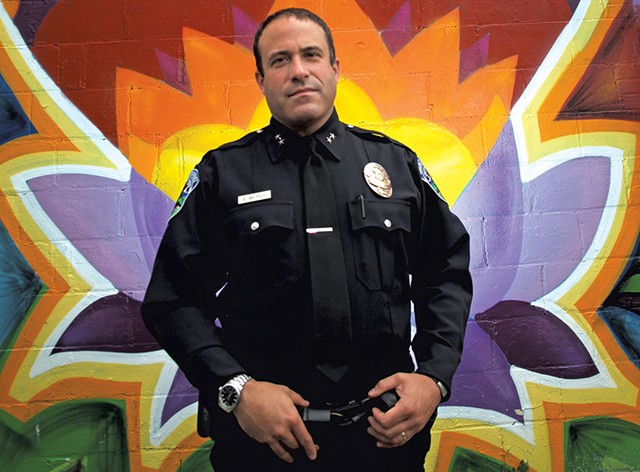 Burlington Police Chief Brandon del Pozo had agreed to let me ride along with him on a Friday night. The mission: checking on foot patrol officers around the city. As we got into his black unmarked SUV, the chief clarified that the Coke and Snickers in the cup holder were not his — the previous passenger had left them behind.

I was profiling del Pozo, who at that point was about a year into the job. Quotable, opinionated and comfortable with reporters, he had already been in the news — a lot. I was hoping to see a different side of him.

Right away, del Pozo noticed splattered bugs on his windshield.

The Burlington police chief was not about to be seen driving a car with bug splatter. So we drove down Riverside Avenue to Newton's Carwash — never mind that it had started to rain — while del Pozo rattled off crime figures like a statistician. When we got there, he couldn't remember the code Burlington police punch in, ATM-style, to get their cruisers cleaned.

He called his deputy Jan Wright on speakerphone. No answer. He called another deputy. No answer. He dialed a third number. Striking out again, he said, "Just bear with me here." Not exactly the responsiveness you'd expect from Vermont's biggest police force.

I began to wonder how many people he'd call before giving up — and how much of my ride-along would be squandered at the car wash.

Finally, on the fourth try, someone picked up and told del Pozo the password. We drove through, emerging bug-free on the other side.

Del Pozo looked over at me with my notepad on my lap and said in a sardonic tone, "You can write: We went though a car wash while it was raining. Chief was upset about the bugs on his windshield."

Try as I might, I couldn't find a way to fit it into the story, but it was too amusing to keep to myself.