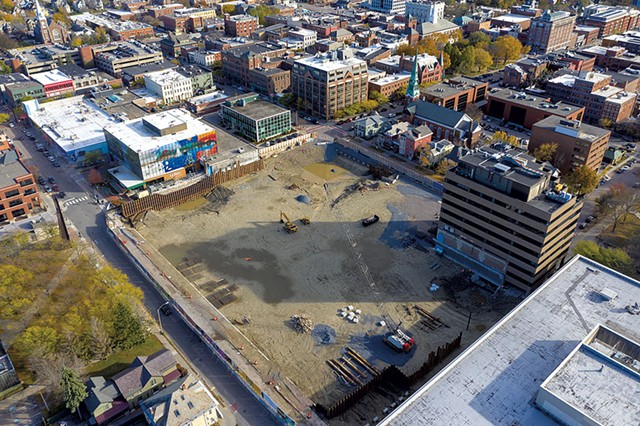 When I signed on to the Seven Days Burlington beat in April, I knew I'd be spending a lot of time at city hall. The Queen City reporter has the honor of covering city council meetings almost every other Monday night. And, let me tell you, there's nothing quite like spending the final third of a 12-hour workday in a really uncomfortable folding chair.

What I didn't count on, though, was the camaraderie I found in what I call Reporters Row. Apparently, it's tradition for media types to congregate in the right front row of chairs — at least, that's what VTDigger.org reporter Aidan Quigley told me on my first day. He started covering Burlington seven months before I did, so he took it upon himself to show me the ropes. The four-hour meetings pass a smidgen faster when the person next to you is under that same deadline crunch. We reporters share name spellings and eye rolls when discussions drag on. And on and on. We take bets on when the meetings will adjourn, and we're usually wrong.

In Reporters Row, we're competitors but colleagues, too, reveling in the inane idiosyncrasies that define #BTVCC meetings. It's just another Monday for us when a Burlingtonian takes the mic at public forum and free-associates on the Queen City conflicts du jour. It wouldn't be city council without President Kurt Wright (R-Ward 4) cracking a sarcastic joke or mispronouncing a speaker's name. And it doesn't surprise us when protesters bring signs to underscore their varied points. It's all part of the gig.

One Monday night in July, the press gaggle roosted outside a conference room, waiting for councilors to exit a closed-door session with an update about the long-stalled CityPlace Burlington project. Soon a project architect announced, not so quietly, to his colleagues across the hall that he'd just heard the project would be redesigned. It was the biggest news about CityPlace in months.

I immediately looked at Aidan and my other meeting buddies, Vermont Public Radio's Liam Elder-Connors and WPTZ-TV's Ross Ketschke: Did they hear what I just heard? They did. And when the architect flew out of the doors onto crowded Church Street, we followed. We were literally chasing a lead.

I filed my story just after midnight and went to bed tired but wired as usual, knowing my article would see the light of day before I would, in the Seven Days' "Know It All" e-newsletter that goes out to readers at 5 a.m.