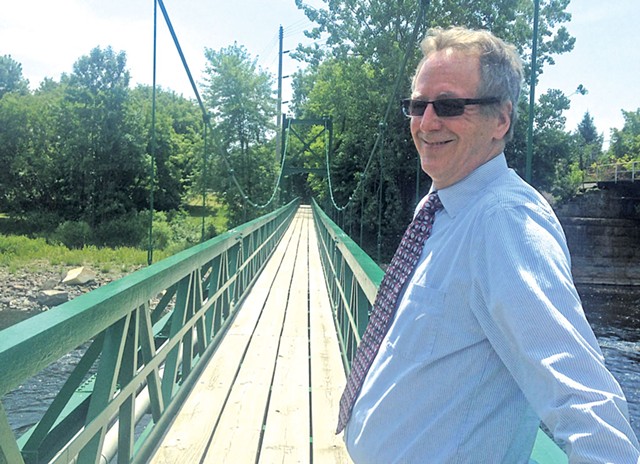 Some elected officials can get so worn down by public criticism that they lose enthusiasm for the places they represent. That was decidedly not the case with Plattsburgh Mayor Colin Read when I interviewed him in late July for a profile about his first 18 months in office.

Frankly, I was expecting someone a little more, well, square. But 58-year-old Read is a pretty cool guy — even if he is an econ professor at the State University of New York at Plattsburgh. Now he drives a BMW motorcycle to work, weather permitting. When he's not crunching numbers or promoting economic development, the Vancouver native flies a floatplane. He and his wife grow cold-hardy grapes on a vineyard north of the city. Yep, we're still talking Plattsburgh.

Read's terrestrial tour of the upstate New York burg on the western shore of Lake Champlain started in front of city hall, a historic limestone edifice in the Classical Revival style that looks a bit like the U.S. Supreme Court. From there, we had a good view of the obelisk-shaped MacDonough Monument across the street — a tribute to the sailor who won the Battle of Plattsburgh during the War of 1812 — and the bay beyond it.

Read's affection for the city was infectious. We walked over a railroad bridge to a row of handsome historic houses that had escaped my notice as I drove in but which were preening and pretty, I could now see.

We wound our way to the waterfront and back downtown past old industrial buildings where, he explained, people used to make stuff and could do so again. He peered into a handsome former bank, now vacant, and suggested that the high-ceilinged lobby would make a great restaurant. I could see it. We walked through a narrow alley — lined with historic, in some cases dilapidated, buildings — and the mayor conjured ideas to make it look like a vibrant European street scene, with nice lighting and outdoor seating instead of dumpsters.

Could he make that happen and continue with the controversial budget cuts he enacted to put the deficit-plagued city in the black? It's too soon to know. But Read left me convinced that the oft-underestimated city could be revitalized into a livelier, more economically successful place.