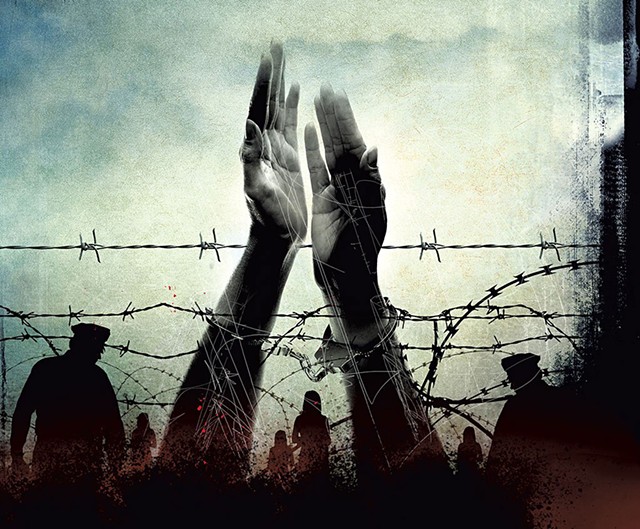 In October, my editor handed me an envelope addressed to Seven Days' post office box bearing the official Department of Corrections stamp indicating that it was inmate correspondence. Inside was a three-page letter written with purple ink and perfect penmanship.

Its author, Mandy Conte, told a harrowing tale about the women's prison in which she was lodged, the Chittenden Regional Correctional Facility. One officer at the South Burlington prison, she wrote, had sexually assaulted her former cellmate, Megan Webbley. Another officer, just days earlier, had been dismissed from his post for sexual misconduct.

"It causes me great concern that these are the men in a position of authority and control of the women incarcerated at CRCF," she wrote.

My editor and I were taken aback by the letter, in part because Seven Days had just published Webbley's obituary — a heartbreaking and frank account of her life of addiction written by her father, Edwin Webbley — and it had gone viral. According to Conte's letter, there was yet another horrific chapter to Megan's life.

Conte implored us to look into the situation. "I'm sure with a little investigation of your own you can verify this information," she wrote.

It took more than a little investigation. Nailing a story when all your potential sources are locked up and walled off from the world isn't easy. Even reaching Conte for the first time was a challenge. She provided phone numbers for her caseworker and her fiancé, both of whom informed her that I wanted to talk. First, though, I had to be added to her "PIN sheet" — a list of approved prisoner contacts — and then she had to sign a media release drawn up by the Department of Corrections. Then I had to wait for her to call. All that took about a week.

When we finally connected, Conte expressed why she was so torn up about Webbley's death — and why she thought it was so important for her former cellmate's story to be told. "I struggled with addiction, as well," Conte told me. "People should be aware of what these girls go through, and the blame shouldn't be placed on them."

As we spoke, I could hear other inmates in the background interjecting when they had something to say. I realized I would need to speak with many other women before I had a story — and I would need Conte's help to do that.

In journalism, the term "stringer" is used for those who contribute reporting from far-flung or inaccessible places. The New York Times, for example, might rely on a Farsi-speaking journalist in Tehran for an on-the-ground report from the scene.

For this story, Conte was my tipster and my stringer. Over the next few weeks, she asked other inmates to call me and frequently checked in with me to see what I needed from the inside. If I was having trouble reaching somebody, she would deliver the message. If somebody was reluctant to talk, she would help persuade them.

By the time my first story on the prison went to press, I'd spoken to more than a dozen inmates and officers. Several bravely agreed to let me use their names in print, despite their well-founded fears of retaliation. I wouldn't have reached any of them without Conte's help.

In her first letter, she wrote, "This cannot be allowed to go unnoticed, women are suffering. How long will this continue to be swept under the rug?"

No longer, thanks to her.