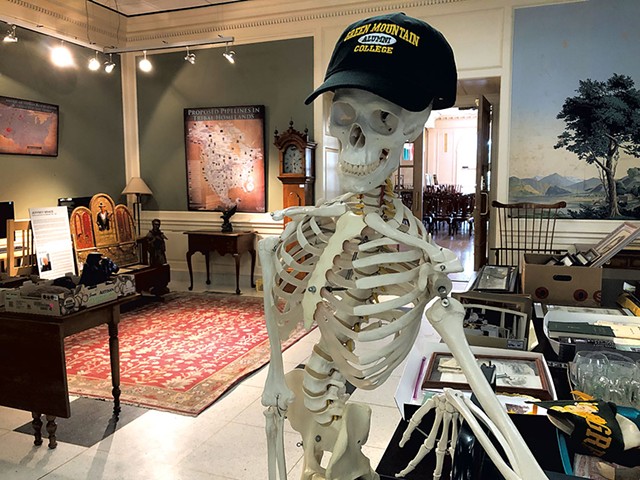 Green Mountain College began the year by announcing it would cease operations at the end of the spring semester. By July, the Poultney campus was for sale. In September, I found myself covering a public auction of the private school's buildings, artwork and furniture. Roaming the library during the "preview," I encountered a man upstairs in a back corner. Stretched out on a couch with a musty old book, it was Duane Merrill, the founder of Duane Merrill & Company auction house, which was handling the sale of more than a thousand items at the college the next day.

Related As Green Mountain College Sells Off Its Assets, Poultney Ponders Its Future

As Green Mountain College Sells Off Its Assets, Poultney Ponders Its Future
By Molly Walsh
Development

Although he was out of context and wearing sneakers, I recognized him right away from auctions I attended years ago, when I was in need of chairs, lamps and beds to furnish my first house. Duane grew up in the antique business and founded his Williston-based auction house in 1970. Now, as he read quietly, he seemed content to be playing an auxiliary role to his son, Ethan Merrill, who was in the adjacent college dining hall, hurriedly setting things up with a half dozen employees.

I introduced myself, and we chatted about the auction biz. In his distinctive voice, he revealed that he still brakes for items that catch his eye at garage sales. "If it's good, I'll stop," explained Duane, who has auctioned rare paintings, jewels and a $270,000 Stickley cupboard. He's more concerned about the treasures being thrown away. "We've found grandfather clocks in dumpsters."

As browsers at the preview eyeballed Herman Miller chairs, bound copies of Vermont Life magazine and lots of Shakespeare plays, we talked about how the auctioneer's job has changed. With the advent of telephone and online bidders, not as many people show up in person. And it might be harder to scoop up deals — because those invisible bidders are in the mix.

But Merrill acknowledged that the auctioneer's style still matters during the live event. "Being an entertainer, as much as selling, is what distinguishes a great auctioneer," he said. The next day, Ethan Merrill provided the rapid-fire soundtrack for most of the auction. But around noon, a reliever stepped up to the podium. It was his dad, Duane Merrill, still talking ... fast.