Backstory: Best Reminder to Show Up

There's a rule in journalism: It pays to show up. I was reminded of this in August as I huffed up a path at Vermont's sole operating landfill in Coventry.

My camera jangled from a strap around my neck. Sweat dripped down my back. This was a dump, not the Riviera. But as I surveyed the scene and pressed the shutter button, I felt a surge of delight.

The day was going better than I thought it would.

When I set out from Burlington, I wasn't expecting to get either an interview or photos for a story about the proposed 51-acre expansion of the landfill. A corporate exec at Casella Waste Systems in Rutland had said landfill general manager Jeremy Labbe would be too busy to talk to me. Could I wait a week or two, the exec asked?

Related Should Vermont’s Only Landfill Get Bigger?

Should Vermont’s Only Landfill Get Bigger?
By Molly Walsh
Environment

No. Newspaper stories are like planes. They should arrive as scheduled. And phone interviews, while helpful, rarely tell the full story.

I wanted to see the landfill and talk to people who run it. So I headed to Coventry figuring I could at least eyeball the dump from the public entrance. It helped that I had a guide who knew his way around: Albany resident Chris Jacobs, a member of Don't Undermine Memphremagog's Purity. The citizen group wants to block the expansion on the grounds that it could pollute nearby Lake Memphremagog. In October, the Vermont Agency of Natural Resources issued one of the permits needed for the expansion under the state Act 250 process. DUMP appealed in state environmental court. 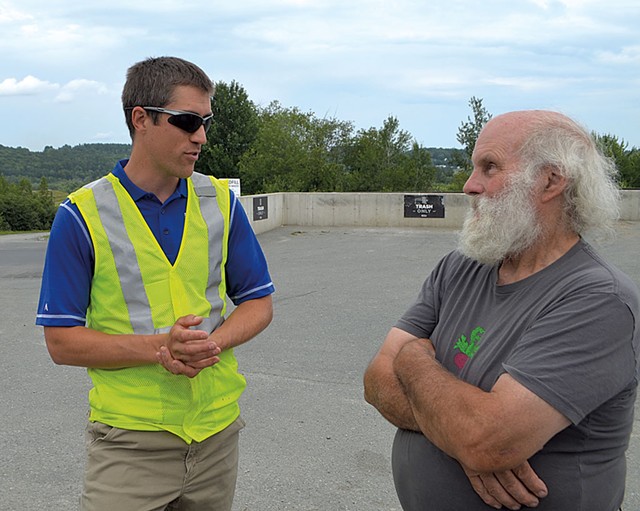 Back in Coventry, we drove in the landfill entrance and quickly connected with Labbe. He was busy talking with engineers and a salesman selling truckloads of a product best described as landfill deodorant. But Labbe made time to answer my questions. He defended the expansion and debated back and forth with Jacobs. Then he green-lighted my photo session of bulldozers crawling over the mountain of refuse.

Could I have filed a story without any of this material? Yes, but not a good one. Nothing beats being there.