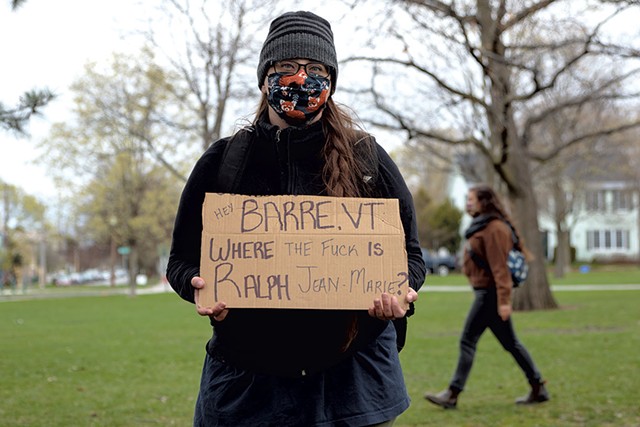 In April, I was assigned to cover a press conference in Barre. The event was meant to drum up interest in the case of Ralph Jean-Marie, a 38-year-old Black man who vanished from the Hollow Inn & Motel a year earlier. (As of this writing, he remains missing.)

But it was also a chance for authorities to push back on accusations that they were neglecting the case because Jean-Marie was Black and poor. As they recapped their yearlong investigation, I must admit that they had me convinced. The police had conducted more than 50 interviews and nearly 30 searches, officials said, in some cases using canine and scuba teams. It sounded comprehensive. Still, I had a duty to vet the investigation, so I kept an eye out for anything that might have been overlooked.

About halfway through the press conference, I noticed a man sitting on his porch across the street from the motel, smoking a cigarette and watching us. For reasons I still can't explain, a question popped into my head: I wonder if the police ever talked to him?

I waited around after the press conference while the rest of the media dispersed, then jogged across the street. The man had gone inside, but a woman had replaced him on the porch. I introduced myself and made some small talk before asking what I wanted to know.

"Nobody ever asked me a thing," she said.

I'd watched enough procedural crime shows to find this odd. I could have thrown a rock from the woman's porch and hit the door of the room Jean-Marie was staying in. Yet no one thought to talk to her even once over the past year?

The woman didn't remember anything about the night Jean-Marie disappeared, though who knows what might have stood out had she been questioned closer to the date. The fact that the police had skipped this seemingly rudimentary step felt noteworthy. I had the beginnings of a story.

The woman named all the neighbors she knew. Back at home, I found their phone numbers and called them. The two I reached said they were never interviewed either. Both also lived within eyesight of the motel. I drove to Barre the next day and started knocking on doors in the neighborhood. Four more people, including one who lived directly next door to the motel, said the cops hadn't asked them anything. Another man hadn't known for months that a person was missing.

Confident that I had enough, I confronted the police chief, who eventually confirmed that his department had never canvassed the residential neighborhood. He said detectives would perform the interviews in the coming days: "I just think it escaped their thought process," he said.

Later, I called the woman from the porch to check in. She said a pair of detectives had shown up on her doorstep that morning to ask about Jean-Marie. She immediately thought of me, she said: "I thought to myself, 'You go, kid.'"