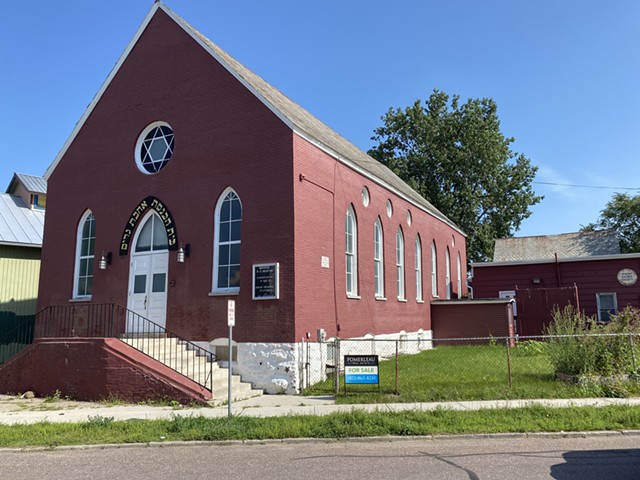 Trying to get the story on a historic synagogue for sale in Burlington's Old North End, I didn't expect to learn something new about my own people — specifically, my husband, Jeff's, paternal grandfather.

Jeff's mom and her two sisters grew up in Burlington. Their father, Max Wall, was the rabbi of Ohavi Zedek Synagogue from 1946 to 1987.

I always knew that Rabbi Wall was a well-respected public figure in Vermont. But when I met him in 2001, over salad and steaks at the erstwhile Sirloin Saloon, he was well into his retirement. A warm and wise octogenarian, he wore cardigan sweaters, watched the Yankees and "Law & Order" on TV, and drove a Ford Taurus with the vanity plate "ZAIDIE," which means "grandfather" in Yiddish.

In the course of my reporting, I called Jeff's aunt Mindy — the eldest of the Wall sisters and a fount of knowledge about all things Jewish in Vermont — to find out what she knew about Ahavath Gerim, the synagogue on the market. To my surprise, she told me that her father actually led his congregation there for almost six years, before moving "up the hill" to the newly built Ohavi Zedek on North Prospect Street in 1952. I had visions of a young Rabbi Wall, fresh from his tour of duty as a World War II chaplain, standing at the bimah and conducting a service under the vaulted ceiling of the red brick building.

State architectural historian Devin Colman directed me to a 2014 Vermont PBS documentary, Little Jerusalem, to learn more about the old synagogue and the Lithuanian Jews who settled in the Old North End starting in the late 1800s. Toward the end of the hourlong film, there was Zaidie, sitting on his living room couch in a cardigan and a kippah, just like I remembered him.

"I didn't want to come to Burlington, primarily because I saw it as an elderly Yiddish-speaking community, and they felt that any change constituted a threat," Zaidie explained in the film. He talked about being "very lonely" when he first arrived in Vermont, the fellowship he found with clergy members of other faiths, and how he modernized the congregation — bringing men and women together to worship, for example.

I felt a swell of pride, and got a little teary-eyed, as one fifth-generation Burlingtonian interviewed in the doc talked about how Rabbi Wall "made Jews proud, so that they could walk down a street and hold their head up high."

Twelve years after his death, I realized just how profound Zaidie's influence was on the place I now call home.

As for the red brick synagogue, it's still listed for $650,000 on the Pomerleau Real Estate website.