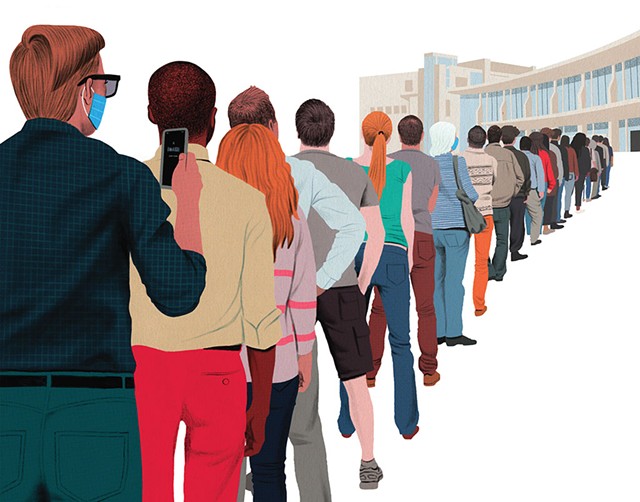 I was on the final day of a weeklong summer vacation when I made the mistake of checking my inbox.

That morning, I had been copied on an avalanche of emails from our publisher, Paula Routly. They were responses to a piece that she had written in the previous week's paper about a very scary migraine episode that landed her at the University of Vermont Medical Center. Equally frightening: She'd have to wait 10 months for a follow-up visit with a neurologist. Suspecting that she wasn't alone, Routly put out a call to readers, and more than 100 emails ultimately poured in about long wait times and other access problems. Unbeknownst to me, I was one of two reporters tasked with sifting through them all.

Routly later generously apologized for cc'ing me when I was still on vacation, but I didn't mind — taken together, the emails constituted a journalistic gold mine. Reporters consider themselves lucky when even one person shares an anecdote that's relevant to a broader story. We had dozens, from all corners of the state and all reaches of the health care system: waits for dental care, psychiatric appointments, surgeries.

After reading through all the submissions, my colleague Chelsea Edgar and I agreed we needed to narrow our scope to something manageable. We chose to focus on specialty care. We split the list in half, pulled out all the relevant entries and hit the phones. Within a week, we had interviewed more than 20 people. The story started to take shape. Six weeks later, it was on the cover of Seven Days.

The response was swift. State officials announced an investigation into the problem just a few hours after the story dropped. The UVM Medical Center released an action plan documenting how it expected to reduce wait times. Many more people wrote in with new stories or thanked us for shedding light on the issue.

I was surprised by how much it all resonated. The problem wasn't new; a handful of other outlets had covered the issue in recent years. But what set our story apart, I believe, were all the personal stories we were able to collect, thanks to the many people who wrote in.

The moral? We want to hear from you! Know something we should write about? Email us, or fill out a tip form on our "contact us" page.