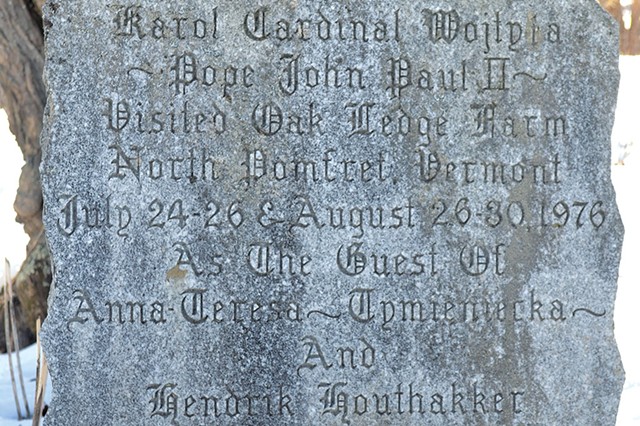 Winter sunshine warmed the town of Pomfret on the February day I walked into the local library in hopes of meeting someone who knew the late Pope John Paul II's translator and special friend, Anna-Teresa Tymieniecka, who once resided nearby.

Within minutes, my prayers were answered. In came Eleanor Pizzani, a retired nurse who lives next door to the library. Yes, she had met Tymieniecka several times before her death in 2014. Yes, she knew how to get to Oak Ledge Farm, where the pontiff visited Tymieniecka and her family in the 1970s. And yes, she would be happy to take me there.

We journalists talk to strangers all the time, or at least try to. Sometimes they snub us. Sometimes they want to help but don't have useful info. Then there are strangers such as Pizzani — knowledgeable, connected and a human GPS.

We loaded ourselves into my dusty Toyota and set out in the snowy landscape. The road curved along riverbeds, climbed past hilltop farms. We chatted easily about the town, our grown children, newspapering. After 20 minutes, she directed me to turn onto a dirt road I would have missed on the first pass, and the second, too. We bounced up the rutted track, and Pizzani immediately recognized the modest farmhouse. We knocked on the door together and, thanks to the icebreaking skills of my trusty guide, were soon chatting all about Tymieniecka with another one of her acquaintances who answered the door.

After the interview, I drove Pizzani back to the library and thanked her profusely. The truth is, a stranger helped me report my story, and now she's getting some credit.