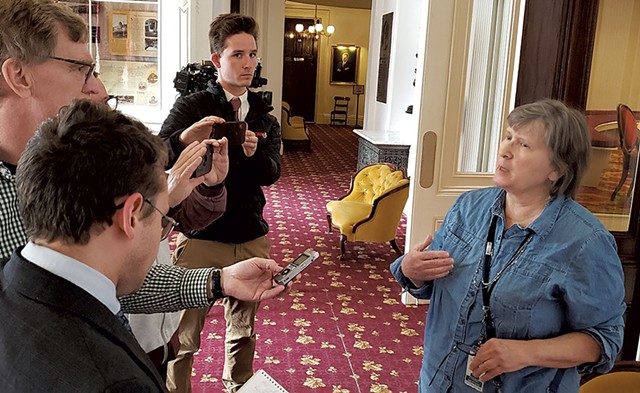 Vermont House Democrats are using their new videoconferencing skills to conduct more than just official legislative business. They are also turning to Zoom to hold private meetings about campaign and political strategy.

House Dems assert that one recent meeting — convened by the Vermont Democratic Party — was appropriately closed to outsiders because the agenda was campaign-related and legislative business was not discussed.

Critics say that such meetings, held on the same remote platform being used for official business, could stray into discussion of policy matters and thus foster distrust of the legislature's transition to remote decision making during the coronavirus pandemic.

Rep. Cynthia Browning (D-Arlington), a frequent critic of House leaders, including Speaker Mitzi Johnson (D-South Hero), said the sessions may be legal but "don't smell right" and should be either opened up to the public or ended.

"Speaker Johnson is saying, 'I've been so forthcoming and open and inclusive in this process,'" Browning said. "Yet they are still doing secret meetings. I just think that's hypocritical."

House Majority Leader Jill Krowinski (D-Burlington) defended the sessions, which have been held twice so far. The March 31 Zoom meeting that has been criticized on social media was organized to help lawmakers navigate a political landscape upended by the virus, she said.

"This is a political meeting that is used to give our Democratic caucus members the tools to be successful in this unprecedented time," Krowinski said.

Cohosting the call with his Zoom account was Spencer Dole, House campaign director for the Vermont Democratic Party. Email invitations stressed that no legislative policy would be discussed, nor was it, Dole said.

"This was a private call to talk about the 2020 election and campaign resources on how best for members to run in the COVID-19 era," Dole said.

The distinction between legislative meetings and political ones has long been muddled in Montpelier. Legislative leaders and their attorneys say the General Assembly isn't bound by the state's open meetings law, which imposes strict guidelines on public bodies such as the Burlington City Council and small-town selectboards.

State legislators say there's nothing inappropriate about — or preventing them from — holding private off-site gatherings to discuss political strategy and messaging, to conduct training, or just to socialize.

But Browning said she's been in past off-site caucus meetings — including weekly Democratic "kitchen cabinet" confabs in the tax department building — where conversations about politics invariably bleed into policy debates. She thinks party leaders should clear things up.

"Any time you have to get into a convoluted explanation about why what you're doing is OK, you need to think, Is it really OK?" Browning said. 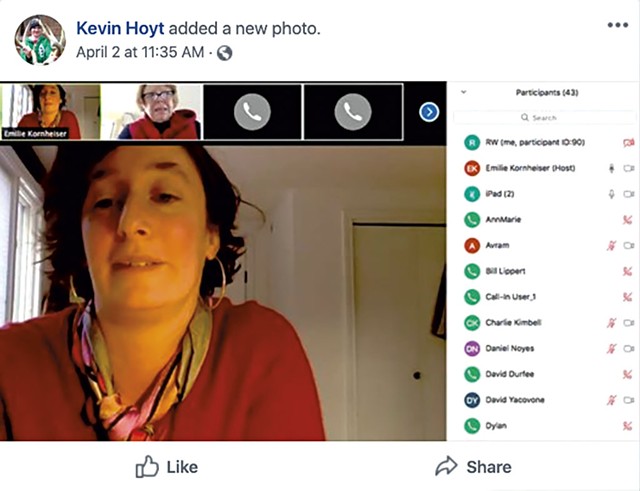 Bennington resident Kevin Hoyt, a gun-rights activist and former Republican candidate for the House, says he snuck onto the call briefly and took screenshots of the other participants until he was kicked off for refusing to identify himself.

"The supermajority in a private, secret, illegal shadow government," Hoyt declared on Facebook, where he posted the screenshots.

Johnson was not on the call but said its purpose was to help lawmakers learn to connect with their constituents during a time when they can't knock on doors or hold traditional campaign events. Such outreach is especially important, she said, when Vermonters need the latest information about slowing the spread of the virus and weathering the economic fallout.

"Constituent outreach and contact is absolutely the name of the game right now," Johnson said, noting that political parties have access to voter registration information useful for outreach efforts.

Despite such distinctions, the call was definitely not OK with Hoyt, who says he's running for governor in 2020. He insisted that the Zoom call violated open meeting laws, and he railed against it as proof of a government run amok. He called the practice of lawmakers meeting remotely a "horrible mistake" that would make it easier for the government to "rig our elections."

"I needed a secret, fake name to get in," Hoyt said in one video posted on social media. "I needed a password and code word to get into their little, tiny Democrat-only meeting where 44 of our legislators were meeting in secrecy, talking about who knows what."

Asked by Seven Days how he gained access to the call, Hoyt initially said he would not reveal his source. Then he said, "To be truthful, I don't even know my source." He explained that a note left in his car outlined the "fake name" and the "codewords and passwords" he would need to access the site.

Last week, Hoyt put up a number of posts on Facebook, outlining his refusal to comply with coronavirus restrictions, his strong belief in the existence of the "deep state," and his recent research into "Q," short for "Q Anon" — an anonymous person or group online who claim to have knowledge of government secrets.

And Joey Kulkin, the moderator of a Facebook page focused on Bennington politics, also obtained the call-in number for the Dems' March 31 session and shared it with others.

"Go to this meeting," Kulkin wrote in a Facebook message, shared with Seven Days by Rep. Chris Bates (D-Bennington), which included the caucus call dial-in number. "And screen shot everyone you see. I'll explain later. It's a super secret group of reps."

Contacted by Seven Days, Kulkin claimed limited knowledge of the call, and then declined to comment.

The Vermont Democratic Party has since instituted additional security restrictions for its Zoom calls. Future ones will have unique caller IDs and passwords for invitees, Dole said.

The original print version of this article was headlined "Backroom Zoom? | A private Democratic meeting leads to criticism"