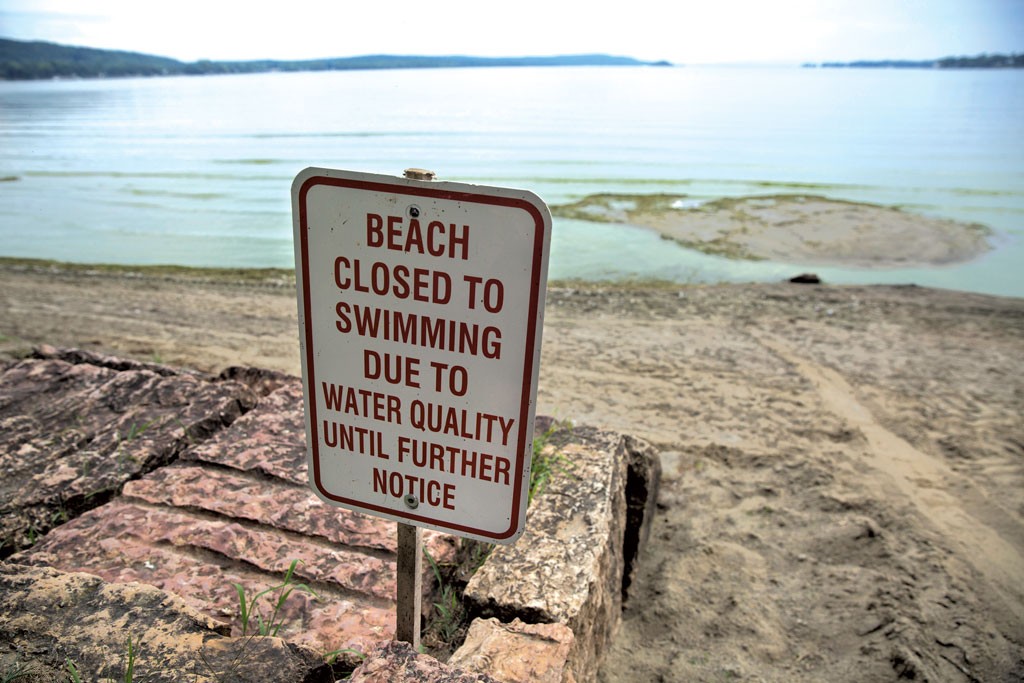 It was warm and sunny on Friday afternoon two weeks ago in St. Albans, but the town beach was deserted. That's because the water washing ashore was thick with blue-green algae, a potentially toxic threat to people and pets. "Beach closed" signs were posted up and down the stretch of lake in bulb-shaped St. Albans Bay.

This happens frequently in August, when the air and water are at their warmest and therefore most hospitable to algae blooms. When conditions change — cooler temperatures or a hearty breeze help make the algae dissipate — the beach reopens and people flock back.

Less than a mile away is the city's wastewater treatment plant. The U.S. Environmental Protection Agency is targeting it as part of a sprawling plan to reduce the phosphorus that fuels the annual algae blooms. A draft plan unveiled last month would require St. Albans to upgrade the facility at a price tag of $2.9 million.

"I don't think there's any doubt it's the right thing to do. The question is how to pay for it," said St. Albans city manager Dominic Cloud. Cloud noted that the city is in the midst of a $105,000 pilot project, funded by the state, to test three methods of reducing phosphorus from its plant. "It's not a slam-dunk how to do this," he said.

St. Albans isn't alone in facing expensive wastewater plant upgrades to meet updated phosphorus standards. The city of Burlington could be on the hook for $30 million; upstream, Montpelier may have to spend $20 million; tiny Richford, $7.8 million. More than a dozen wastewater plants in the Lake Champlain basin likely will be required to make upgrades as part of the EPA's new, improved strategy to clean up Vermont's best-known natural landmark. The state's Conservation Law Foundation sued the agency over the past plan, on the grounds that it didn't go far enough and thus wasn't working.

Cloud isn't the only one questioning the EPA's focus on treatment plants. Up and down the lake, Vermont officials are wondering whether the changes, outlined in a 66-page agreement between the state and the EPA, would really clear the lake's waters — and if the projects would be cost-effective. Only 3 percent of the phosphorous that makes its way into the lake comes from wastewater facilities; in Missisquoi Bay, it's 8.5 percent, according to the EPA. 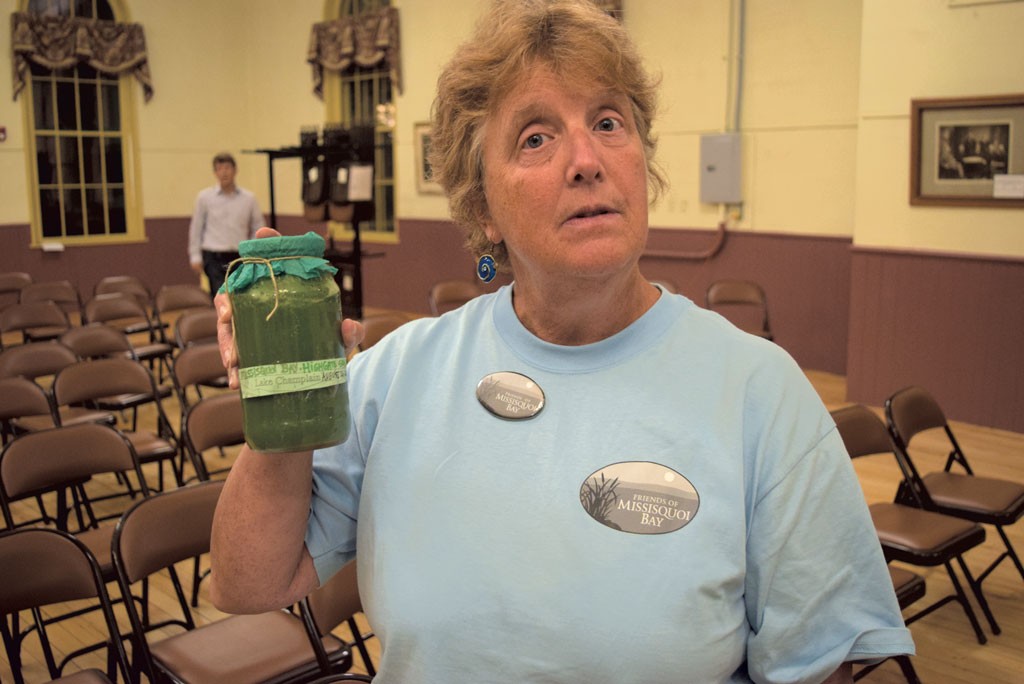 Burlington Mayor Miro Weinberger said that the Queen City has a long history of commitment to cleaning up the lake. But he isn't convinced that spending $24 million to upgrade Burlington's main plant and $3 million on each of two smaller ones will provide the most bang for anyone's buck. "It's really important that that money be spent in a way that's having the greatest impact, if we're going to succeed," Weinberger said.

Town and city leaders, farmers, developers, environmentalists and beach-goers have until September 15 to weigh in on the EPA's draft plan.

Vermonters have a lot to say, judging from a public hearing on the document last Friday in St. Albans. State Agriculture Secretary Chuck Ross warned the crowd that under the plan, cleaning up the lake would still take years.

That's when Colleen Curran erupted. "Every summer, it's awful," she said from the audience. She shook with anger at the prospect of waiting a decade to clear the stinking swill at her family's longtime camp on Missisquoi Bay. For evidence, she brought in a screw-top jar full of green, foul-smelling, algae-clogged water she collected that morning at the camp. "It's got to be fixed," she insisted.

Swanton dairy farmer Richard Longway, meanwhile, said he was frustrated that despite all the expensive changes farmers have already made, the lake condition has gotten worse, not better. "The last 15 years, the State of Vermont has been telling us what to do, and I'm not sure if us older farmers didn't know what we were doing a long time ago," he said.

There was no disagreement that the lake needs help. The best way to fix it? That's more elusive, given the many uses of the land around it, some of which are in conflict with each other, said Mike Winslow, staff scientist with the Lake Champlain Committee.

Tilling fields to plant corn on hillsides right next to the lake speeds the flow of phosphorus, he noted, but corn is also a farmer's bread and butter.

"The problem is not solvable," said Winslow. He nonetheless said, "In every case, we need to do better, and we need the strict standards to get there."

Phosphorus collects in some places not just because of human-driven contributions, but because of geography, Winslow noted. Shallow, enclosed areas of the lake such as St. Albans and Missisquoi bays are more susceptible to algae blooms than deeper, wider portions. In the southern portion of the lake, phosphorus is high but algae blooms are rare.

The Vermont legislature passed a bill last May to show the feds the state is serious about doing its part to reduce phosphorus. That will mean changes in practices for farmers, developers and towns. Think fewer cows bathing in rivers, eco-friendlier parking lots and better road-runoff control. The Vermont bill also provides a modest funding mechanism for lake cleanup: a property tax transfer that is expected to raise $5.3 million in 2016 for the new Clean Water Fund.

That helped satisfy the EPA, but the feds insisted that the state reduce phosphorus to the lake by 34 percent. State officials had hoped to avoid wastewater treatment plant upgrades as part of the plan, but in the end the feds insisted some were needed.

The EPA didn't target all 59 wastewater plants in the Lake Champlain basin. Just 25 plants in the most troubled parts of the lake will have to meet higher standards. Of them, 13 would likely have to make capital improvements in the near future, said Eric Smeltzer, environmental scientist with the state Department of Environmental Conservation.

Stephen Perkins, the EPA's Lake Champlain project manager, said his agency selected plants along portions of the lake where phosphorous cannot be reduced sufficiently through other means. Farms along the Missisquoi River, for example, have been targeted for an 82.8 percent reduction in phosphorus. The EPA could not realistically require more, Perkins said, so it turned to the wastewater plants on the aqueous route to Missisquoi Bay.

That affects the tiny town of Richford. It's 20 miles from Lake Champlain, but is targeted for an estimated $7.8 million in wastewater treatment upgrades.

Richford Selectboard member Norris Tillotson said he was unaware the town's wastewater treatment plant was on the EPA's hit list. "I've been around too long to have much confidence in their plan," he said, seemingly unimpressed.

Perkins said the EPA will take all comments into consideration and could modify the plan before sending it back to the state. The state will follow up with public hearings that cover more precisely how the requirements will unfold.

City and town leaders should be dubious, said stormwater expert A.J. LaRosa, a lawyer with the Burlington firm Murphy Sullivan Kronk. "I think the allocations to the wastewater treatment facilities is a huge burden on taxpayers for a very minimal gain," he said. "That same money, if invested more wisely, could likely reduce the phosphorus loading from agriculture by a lot more."

What if, instead of spending $30 million on Burlington's wastewater plants, that money was given to farmers to prevent phosphorus runoff? After all, agriculture makes up 40 percent of Vermont's phosphorus contribution to the lake.

The funding doesn't work that way, Perkins said. Government funds to help communities pay for wastewater treatment upgrades come from a different pool than those for agricultural changes.

The plants are also the only source of phosphorus that the EPA has the authority to directly regulate, he noted. The agency has to rely on the state to tell farmers, developers and town highway crews what to do. Perkins said that means the EPA holds in reserve the option of cracking down on more plants if the state doesn't reduce phosphorus enough through other means.

James Ehlers, executive director of the Lake Champlain International, a lake advocacy organization based in Colchester, said the plan misses the point. He'd like it to insist on innovative wastewater treatment systems that would more aggressively reduce the amount of phosphorus going into the lake. "The whole idea of continuing to discharge into a polluted lake is fundamentally flawed," he said.

Bill Howland, director of the Grand Isle-based Lake Champlain Basin Program, said he thinks the overall plan will only work if all sectors, including wastewater treatment plants in the most affected sections of the lake, are included.

Alyssa Schuren, commissioner of the state Department of Environmental Conservation, said cities and towns would have some flexibility in upgrading wastewater plants over several years. There should also be money available from the Clean Water Fund and other sources, she said. How much money and flexibility? Nobody knows yet.

One thing is clear. The EPA will be watching and checking Vermont's progress, with proposed benchmarks at the two-and-a-half-year mark and also the five-year one. The EPA has set a high bar for cutting phosphorus — by 64 percent in the Missisquoi Bay, 24 percent in St. Albans Bay and 31 percent in Burlington Bay.

Not all of those goals are feasible, Winslow said, but a road map will help. "I can't see Missisquoi Bay ever meeting water-quality standards," he said, though he added that many of the efforts outlined in the EPA plan will slow the flow of phosphorus.

Ehlers, a frequent critic of state and federal officials' work on the lake, said, "The only people who think this is going to work are the people most vested in the process. Their track record is dismal."

"It can work," countered Howland, "but it's only going to work if all the players do their part. If that happens, it really will turn things around for Lake Champlain." He added, "I've never been more optimistic."

The original print version of this article was headlined "Back to Blue: Lake Champlain Draft Plan Targets Treatment Plants"