Back Road BBQ Pops Up in Cabot 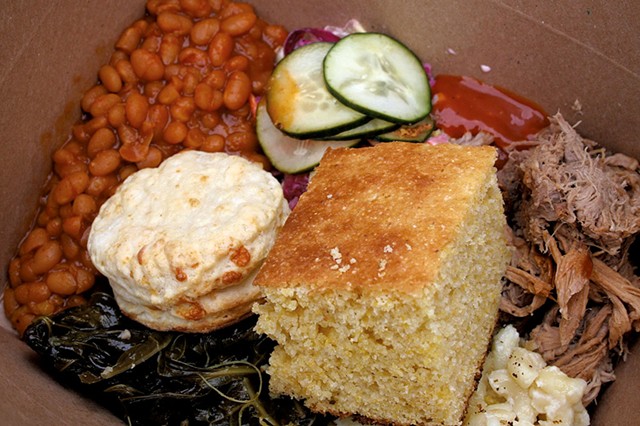 Last Saturday in Cabot, the picked-over remains of a smoked pig's carcass rested on a foil-wrapped picnic table. Nearby stood the unobtrusive wooden box in which chef Brock Miller and Snug Valley Farm co-owner Ben Nottermann — with the help of their friends and some PBR — had slowly cooked the 180-pound porker, yielding about 60 pounds of tender, well-seasoned meat.

Neighbors, along with folks from Barre and Hardwick, lined up at 1806 Ducharme Road to get a taste of Back Road BBQ's first meal. Chefs Isaac Gresser and Charlie Brown — both of whom worked with Miller at Hardwick's A Vermont Place until it closed — scooped up portions of smoked mac and cheese, stewed collard greens, and baked beans. Soon diners were coming back for seconds.

The soft opening and fund-raiser offered farm-to-table food at its least pretentious. Pastured heritage-breed pork from Snug Valley was served with yellow mustard and white bread on paper plates from under a tent in the chef's backyard.

"Everything that touched my mouth was amazing!" said Jennifer McFeeters, a Reiki practitioner and Harley-Davidson enthusiast who noted that she'll ride to Maine for good 'cue.

Last weekend's pop-up feast, paid for by donations, will be followed by several more. The BRBBQ team is gunning to buy a food truck so it can set up shop at Hill Farmstead Brewery a couple of weeks a month, serve spots in Montpelier and beyond with a consistent lunchtime delivery run, and have the option of vending at festivals and gatherings.

For now, find more info on the Back Road BBQ Facebook page.