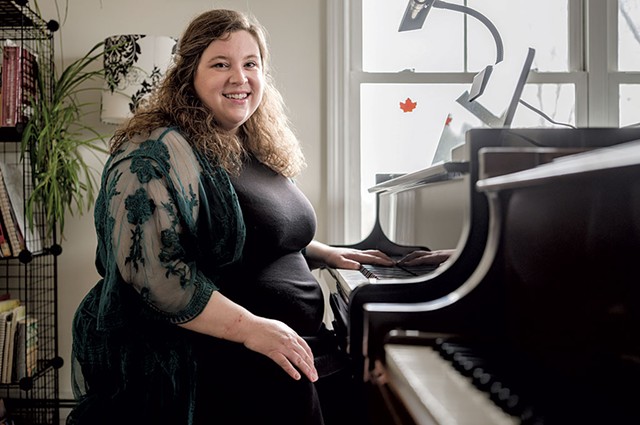 Claire Black, 36, has never owned a couch. Instead, two grand pianos fill the living room of her South Burlington apartment — a Kawai and a Steinway Model L. The room serves as Black's studio, where the pianist, who earned her undergraduate and master's degrees at the Cleveland Institute of Music, gives lessons to 29 young students. Currently, it's also her rehearsal room for her first solo concerts since 2015.

From April 3 through 10, Black will perform three in-person concerts at churches and a library in Chittenden County and livestream a fourth from her living room. Her thoughtfully crafted program, "Poetic Unity," centers on Clara Schumann (1819-1896), an acclaimed German solo pianist of the romantic era who was also a composer, piano teacher, mother of eight and wife of composer Robert Schumann.

These concerts mark Black's return to Vermont after two years away and a reset of sorts. Originally from Long Lake, N.Y., a remote town in the Adirondacks, Black worked as a staff pianist at Baldwin Wallace University in Ohio after earning her degrees. In 2012, she and her then-partner decided to move to Vermont "for a new adventure," the pianist said during a phone call.

In the Green Mountains, Black taught and played with chamber groups, including Vermont Virtuosi and Stellaria Trio. She also discovered a real need for her skills as an accompanist, she said, collaborating with everyone from students auditioning for conservatories to local choruses to visiting musicians giving recitals. Occasionally, she found time to give a solo concert.

"Claire is a wonderfully collaborative player, very open to ideas but also very creative with her own input," said John Dunlop, a Vermont Symphony Orchestra cellist who formed Stellaria with Black and Letitia Quante. "Her chamber music chops are excellent. Technically, she could play whatever we could throw at her."

Flutist and Vermont Virtuosi founder Laurel Ann Maurer has a similar regard for the pianist. "When I first met Claire, I was so impressed with her sight-reading ability," she recalled. "I brought some pretty hard pieces. She played them like they were a piece of cake." Black and Maurer will be featured on a CD of music for flute and piano by David Gunn, Maurer's husband.

"The Vermont audience is a special thing." Claire Black tweet this

She spent a year at Whitworth University as staff accompanist and faculty member before moving back to the Adirondacks to regroup. There, with the pandemic in full swing, she regained enough Vermont students through online lessons to return to the Green Mountains in the summer of 2021.

In the meantime, however, Black had developed carpal tunnel syndrome. She underwent surgery on both hands.

"I really doubted I'd recover," she said. "I thought I'd be compromised, but I'm a better player than I used to be."

Black said Clara Schumann has been "such a refuge" for her during the difficult last two years. The pianist immersed herself in both Schumanns' music, as well as in books about the loving couple. Atypically for the times, the Schumanns supported each other professionally: Robert encouraged Clara's concertizing while she promoted and performed his music, which was deemed radical at the time.

The program begins with the first three of Clara's six Soirées musicales, Op. 6 (1836). She began composing them at age 15 — at the start of her romantic relationship with Robert, who was nine years her senior.

As Black will explain during the concerts, a motif that emerges in the Soirées, known as the "Clara motif," reappeared in several of Robert's works. It opens his Fantasie in C Major, Op. 17 (1836-1839). Much later, Clara featured the motif again in her Variations on a Theme by Robert Schumann, Op. 20 (1853), composed as a birthday present to her husband. Both works are on the program.

The Schumanns' trading of a motif back and forth was "a way to pay homage to each other," Black explained. "Sometimes it's really not obvious, either. Sometimes they'll steal a little something in each other's pieces and then announce to the world that it's in there. It looks like secret code."

Black's program also includes Ludwig van Beethoven's Sonata in E-flat Major, Op. 27, No. 1, completed in 1801. Both Schumanns revered and found inspiration in Beethoven. Like Robert's Fantasie, the sonata is subtitled a "fantasia," or free-form work.

Black's playing, samples of which she posts on her YouTube channel, is well suited to the fluid, soaring expressions of romantic music. As Dunlop commented, "Some pianists are very energetic and rhythmically oriented; Claire has a beautiful, melodic sense of the piano, sort of belying its percussive family roots."

"Speaking for the music community," Dunlop added, "we're thrilled that she came back."

Black has been focused on her solo project for the last five months, to the exclusion of any collaborative projects. "There's such a need around here for piano collaborators that, preparing a solo program, I have felt kind of selfish," she admitted.

But "Poetic Unity" is an offering, too. For Black, the program is about the idea of connection — not just between the Schumann spouses but "between me and this music, me and Vermont.

"The Vermont audience is a special thing," Black continued. She cited a recent University of Vermont Lane Series concert featuring pianist David Kaplan and friends that drew more than 100 people on the night of the worst snowstorm of the season.

"They'll come out," Black marveled. "There's genuine enthusiasm. It's so neat to be in a largely rural place where classical music is held in such high regard."

The original print version of this article was headlined "Warm Welcome"