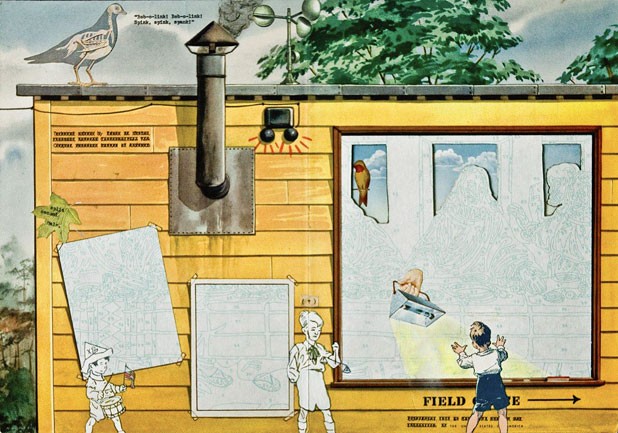 Michael Oatman may have left Vermont, but he’s certainly not forgotten. Barre-based art collector Mark Waskow provides a reminder of this talented native son — now an associate professor and permanent artist-in-residence at Rensselaer Polytechnic Institute in Troy, N.Y. — with an exhibit of Oatman’s drawings and collages at 215 College Gallery. The display represents about a quarter of the 80 Oatman works, made from 1982 to ’94, in Waskow’s private collection (the “Waskowmium”). Cleverly titled “Past Forward,” the exhibit reveals Oatman’s prescient skill in combining techniques and artistic media before “mixed media” work became commonplace. In addition to his complex layering, Oatman astutely melds fragments of popular culture, history and natural science. But rather than relying on fashionable irony, he capably grounds his work in the formal properties of visual art.

Oatman, now 46, graduated from the Rhode Island School of Design and earned his MFA at the University at Albany-SUNY in 1992. He taught at the University of Vermont and St. Michael’s College for most of the remaining decade before leaving for RPI in 1999. Oatman might best be remembered in Burlington for a massive and obsessively detailed 1995 installation at the Fleming Museum that addressed the sore subject of eugenics in Vermont’s past. He’s referred to his installations as “meta-drawings,” says Waskow. “He’s testing the limits of all these media.” But regardless of what one calls it, “It’s more important to experience the work,” Waskow concludes.