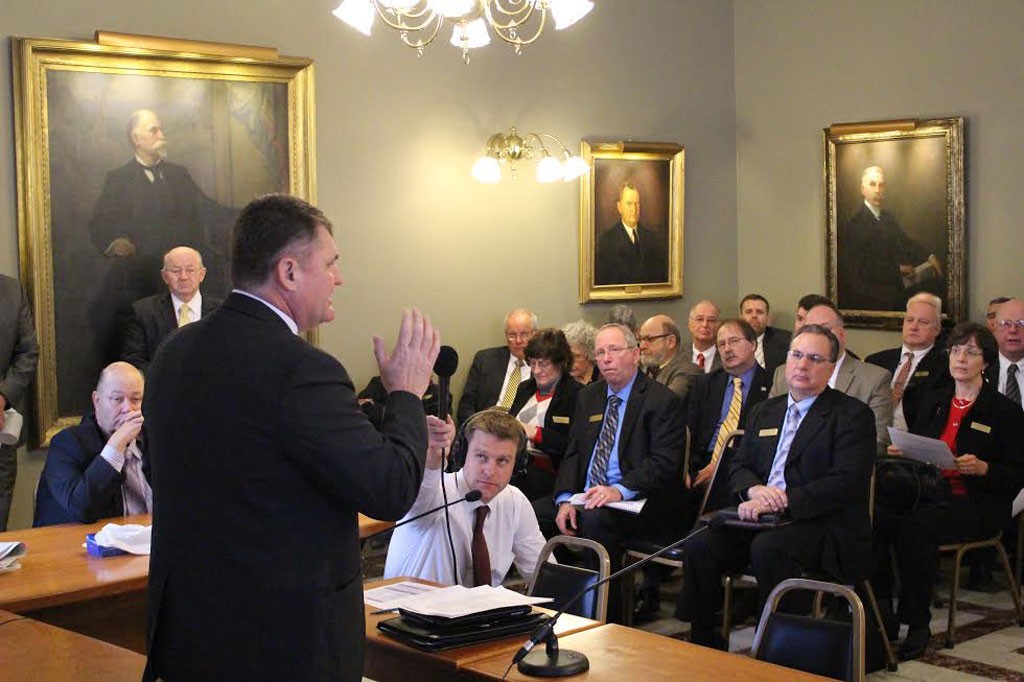 In a written statement he provided reporters, Rep. Warren Van Wyck (R-Ferrisburgh) explained that he was "not interested in passing judgments" on the actions of other states, "unless they directly affect the substantive well-being of the state of Vermont and its residents."

One hundred and nineteen legislators voted in favor of the resolution, which denounces a law critics have said permits discrimination against gays. The resolution also calls on states to enact nondiscrimination statutes protecting lesbian, gay, bisexual and transgender citizens, and it asks members of all three branches of Vermont's government to refrain from traveling to states that allow for unequal treatment.

While those who voted last Friday morning solidly supported the measure, an unusual number of lawmakers were absent for the roll call. A disproportionate number of those hailed from the GOP, which holds just 53 of the House's 150 seats.

Among the AWOL were 17 Republicans, 10 Democrats and two independents.

Surely some of them were observing Good Friday or Passover, such as Rep. Vicki Strong (R-Albany), who said she decided to stay home "out of respect for the holy day." Her husband is the pastor at the Albany Methodist Church.

How would Strong have voted if she'd made it to Montpelier?

"I honestly can't tell you," she said. "I probably would have given in to peer pressure and voted yes, but my concern was sending [the resolution] to 50 other states."

Other lawmakers were spotted around the Statehouse Friday but were mysteriously absent for the vote.

Rep. Bill Canfield (R-Fair Haven) was one of them. He said he was tied up at the clerk's office, filing his expenses for the week so that he could be reimbursed. He said he's "not sure" how he would have voted.

Rep. Lynn Batchelor (R-Derby) was more sure. She opposed the resolution in principle and openly admitted that she skipped the vote on purpose.

"I went to the ladies' room and then I went to my committee room and listened," she said.

Why not just vote no?

"I believe that people should have their rights, absolutely," Batchelor attempted to explain. "I believe that if they are gay or transgender or any other problem — whatever else they have or believe in — that's their beliefs, and we shouldn't tread on them here in our states."

Um, any other "problem?"

Rep. Doug Gage (R-Rutland), who was also spotted in the building, was less forthcoming. Asked over the phone Monday why he didn't vote, he said, "Just decided not to."

"I just said: I just decided not to," he clarified. "I had my own reasons."

What were those reasons?

"I think we're done with this conversation," Gage said, hanging up the phone.

Rep. Tom Terenzini (R-Rutland), drove all the way up from Rutland to the Statehouse Friday morning. But after filing his expenses, he said, he left town before the vote.

"I wasn't trying to avoid anything," he said. "I wasn't feeling well."

Terenzini knows exactly how he would have voted had he stuck around.

"I would have voted against the resolution because, you know, No. 1: I don't like socialist Democrats and the Progressives shoving that crap down my throat," he said. "I mean, if a person owns a business, he has the right to deny service to anyone — because it's his or her business. And you can print that, my friend."

So it'd be OK to deny service to, say, African Americans?

"No, that wouldn't be OK," Terenzini said.

"Equal rights, I guess," he said. "Everybody should be treated fairly. But if an owner owns a company, he should have a right to deal with certain organizations or whatever."

But it's OK to deny service to gays?

"No, I'm not saying that," Terenzini said. "I'm saying an individual has the right to, you know, this, I mean, this law is in 20 states in the United States now. I believe it was started by — I think even Clinton signed on to it back in the '90s. But I, you know, I just, you know, I just feel that if you own your own business, there might be someone you don't want to deal with."

Such as someone who is gay.

Late last month, Attorney General Bill Sorrell launched a campaign finance crusade against former lieutenant gubernatorial candidate Dean Corren. The AG is seeking $72,000 in fines and restitution from the publicly financed Prog for allegedly coordinating with the Vermont Democratic Party over an email worth $255.

As we noted in last week's Fair Game, Sorrell hasn't subjected himself to the same scrutiny he has Corren.

Two years ago, the AG blew off requests from a top Republican to investigate alleged coordination between Sorrell and a super PAC that bailed him out of a close race. And as he admitted to Seven Days, Sorrell took $9,000 from a Texas law firm as its representatives requested a meeting — and later hired the firm to sue on behalf of the state. 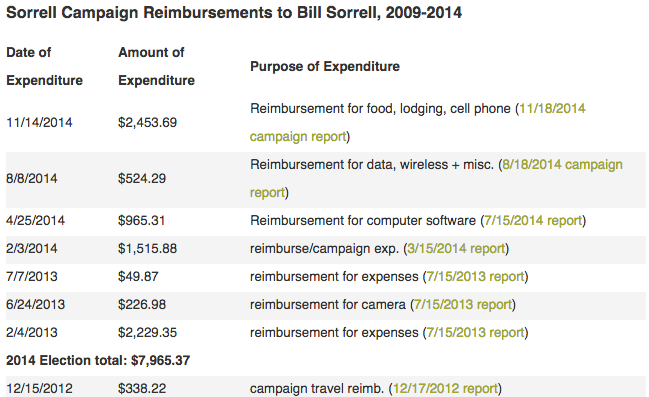 Sorrell has also failed to comply with a pretty basic element of campaign-finance law: Several times a year, candidates must publicly disclose each campaign expenditure they make, "listed by amount, date, to whom paid, for what purpose," according to state law.

A review of Sorrell's recent filings shows that he has routinely ignored the rules. Sixteen times over the past four years, Sorrell's campaign has reimbursed him for hundreds, and sometimes thousands, of dollars' worth of expenses paid out of his own pocket. In each instance, the campaign provided only a vague explanation of what Sorrell bought with the campaign cash — and never once did it disclose who it paid.

During his 2012 and 2014 reelection campaigns, Sorrell reimbursed himself a total of $18,542 without much explanation.

According to elections director Will Senning, who works for Secretary of State Jim Condos, "All campaign expenses are meant to be made directly from the campaign account and reported individually on the reporting form." Each violation is punishable by a fine of up to $10,000, Senning says.

Why is it important to report expenditures?

"I think the entire idea of campaign-finance disclosure law is to have an idea from who and what sources people are raising their money and on what they're spending that money," Senning says.

The latter is impossible to divine from the AG's filings.

Sorrell declined a request this week for more information about the campaign expenditures in question. In an emailed response, he said, "I have met my disclosure obligations."

But when Seven Days asked him about the practice at the end of an unrelated interview in March 2014, Sorrell was more forthcoming. He said many of the reimbursements relate to his trips to Democratic Attorneys General Association conferences. Though DAGA pays for his airfare and lodging, he said, his campaign picks up the tab for "baggage-check fees, food that's not otherwise provided, if I have parking or a taxi."

He continued: "And if I have a meeting with somebody over lunch, in-state, to talk about being of assistance to my campaign or something like that. I just keep these receipts and then once every six months, or whatever, compile them and get reimbursed."

Asked at the time why he didn't provide a line-item accounting, as the law calls for, Sorrell assigned responsibility to his campaign staff, saying, "I did to my treasurer."

That's an interesting argument, given that in an April 2012 motion he filed in a campaign-finance case against former lieutenant governor Brian Dubie, Sorrell himself called it "absurd" to say a candidate isn't responsible for the actions of his staff.

"The plain language and structure of the statutes make clear that it is the candidate who bears responsibility for compliance with campaign finance laws," he wrote.

Even after Seven Days asked about the practice last March, Sorrell continued to provide vague explanations for his expenditures, such as the $2,454 reimbursement he identified last November as paying for "food, lodging, cell phone."

Sorrell is not the only candidate to flout Vermont's expenditure-reporting requirements. But a review of other recent filings found that no statewide candidate has done so as frequently or consistently as Sorrell.

Senning, whose office has no enforcement powers, says he had not noticed the pattern. If he had, he says, he would have contacted Sorrell to provide more guidance on the law.

"We just don't have the staff time to be combing through them, or something like that might have jumped out at me," he says.

With a laugh, he added: "And it's up to the attorney general to determine whether it's a violation or not."

Former Stowe Reporter publisher Maria Archangelo returned to the Vermont media world this week with a new gig as editor and copublisher of the Essex Reporter and Colchester Sun.

Archangelo left the Stowe Reporter and its sister paper, the Waterbury Record, in October 2012 to launch a short-lived community magazine chain for hibü, the company formerly known as Yellowbook. After another stint in communications and marketing in Philadelphia, Archangelo says she realized she "desperately missed community journalism and my home and family in Vermont."

In addition to her father, Parini will be working alongside sisters Christy Lynn and Polly Lynn — and with stepmom Lisa Gosselin, who is joining the company after nearly two years as the state economic development commissioner.

"We're creating a more talented and youthful team that has the vision and energy to put focus on other aspects of the business while still making the print products stronger than ever," says Angelo Lynn, adding that he's "thrilled" to have his wife and daughter joining him in Middlebury.

Lastly, Vermont lost a legendary journalist last week with the death of Kendall Wild. The longtime managing editor of the Rutland Herald died Thursday at the age of 87.

The Herald honored its former chief with a package of stories and remembrances Saturday recalling his 40 years at the paper. Wild got his start on the city desk in the early 1950s and retired in 1992 as editorial page editor. In the years between, colleagues recalled, he transformed the paper into the leading news source in Vermont and distinguished himself as scourge to the political class.

The original print version of this article was headlined "AWOL Pols"