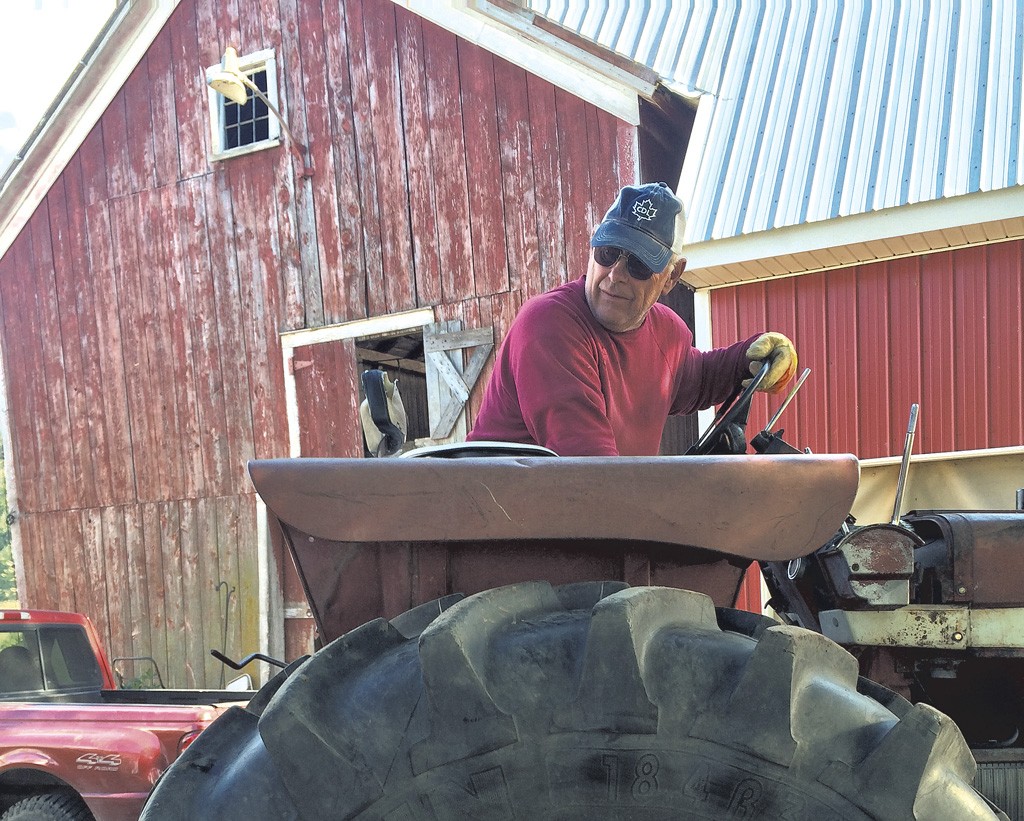 State Sen. Norm McAllister leaned against a railing on the decaying front porch of his Highgate home, surveyed his 400-acre farm and acknowledged the obvious: It's been a trying year for him. The Franklin County Republican was arrested at the Statehouse in May on highly publicized sex-assault charges. His constituents have circulated a petition calling on him to resign, and Senate leaders have said they'd initiate expulsion procedures if he doesn't step down before the legislature reconvenes in January.

McAllister recently sold a greenhouse he owned in town, and some farm equipment, to pay his attorneys, and he fears he may have to sell more land as the case continues. A friend concerned about McAllister's mental well-being took his rifles away. So he couldn't shoot a fox that killed most of the 100 chickens he kept for the egg money.

"You feel like the whole world is coming down on you," said McAllister, 64, who was stacking wood in his cellar when Seven Days knocked on his door last Wednesday. In beat-up tennis shoes, blue jeans and a tight red sweatshirt rolled up on his thick forearms, he asked, "What the hell did I do to deserve this?"

McAllister has spent most of his time on the farm since he was charged with coercing two women to have sex with him: One lived — and still does — with her boyfriend in a trailer McAllister owns on the property; the other was an assistant who worked with the senator at the Statehouse. A third woman, a resident of Enosburg Falls who has since died, said he propositioned her, but she alerted police. In May, McAllister pleaded not guilty to six charges, including three felony counts of sex assault, in Franklin County Superior Court, and refused bipartisan calls to resign his legislative seat.

Five months later, McAllister remains unbowed. Speaking matter-of-factly and without anger, he said he is innocent, the victim of spurious allegations that were made by vengeful women and published by reporters peddling "trash."

"You're screwed, because in this state, women are considered the Holy Grail," McAllister told Seven Days. "Women don't lie. I've had landlords come up to me and say, 'You know, this is going to scare us, because if you rent to a single woman, you've got to have witnesses.' There's something wrong with our system. It's great that nobody is above the law. But how does that work when you get accused of something you didn't do? There's a presumption that you must have because you're a man."

McAllister paused, and then let out a long sigh before continuing. "That's the point that bothers me, because we keep talking about equal rights, equal footing — what's equal about this?" he said.

McAllister said he has no plans to resign his Senate seat and expects to be acquitted when his case goes to trial next year. No court date has been set. "I didn't do anything wrong, so there won't be a plea deal," McAllister said. "My lawyer told me I shouldn't say that. But I told him that at our first meeting."

McAllister, a Weathersfield native, is a fifth-generation Vermonter and a lifelong dairy farmer who earned an associate's degree in agricultural management from Vermont Technical College. He married his high school sweetheart, Lena Mae, and they bought their farm in 1975. She died of cancer in September 2013.

McAllister was elected to the Vermont House in 2002 and won a seat in the higher chamber in 2012. In the legislature, he is a backbencher who garnered little press attention until Vermont State Police detectives arrested him outside the west entrance to the Statehouse in the final weeks of the last legislative session.

It was the result of an investigation that began when the Enosburg Falls woman called police in May and said that McAllister had suggested she provide sexual favors in exchange for allowing her son, who was behind in rent, to continue to live in a trailer on McAllister's property.

Then the son's girlfriend, with whom he shared the trailer, accused McAllister of forcing her to have sex with him in exchange for letting the duo reside on the farm. She described dozens of nonconsensual sexual encounters that started in 2012. In a phone conversation police recorded days before they arrested him, McAllister acknowledged she was performing oral sex under pressure.

"I understand why you felt that way, but it was not much of a turn-on," McAllister told the woman, according to police affidavits. "I knew I was forcing you to do something you didn't want to do ... I knew that you didn't really want to do that."

The investigation led police to McAllister's former Statehouse assistant, who is now 20. She told authorities that McAllister first sexually assaulted her years ago, soon after he hired her to work on his farm. It continued last winter when he hired her to help him in Montpelier. They shared an apartment during the week with two other lawmakers. The young woman told Seven Days that she was 15 or 16 years old when the sexual relations started on the farm. The legal age of consent in Vermont is 16.

As a general practice, Seven Days does not identify victims of alleged sex crimes.

The Enosburg Falls mom died of natural causes in June, and her son and the other woman still live in McAllister's trailer. McAllister said he initially allowed them to stay there rent-free, as long as they helped him around his farm. But when they didn't meet his expectations, McAllister said, he asked them to pay $500 a month. That, he contended, motivated them to call the police.

"That's what this is all about — money," McAllister said. "It's all about money. As long as they were living there for free, they had no complaints. That started when I asked for rent."

The Statehouse assistant lied to authorities about the consensual nature of their sexual relationship, according to McAllister. He said she had a difficult upbringing and approached him for a job. He wanted to help, he said, so he created a job for her in Montpelier — checking his email and keeping his schedule — for around $200 a week out of his own pocket.

"I said, 'I can't guarantee you anything, but you have a chance to get your life on track,'" he said he told her.

Asked whether he'd had sex with the two women who have accused him of assault, McAllister didn't hold back: "After my wife died. Months after. I've never denied that I had sex with them." He said his legislative assistant was at least 16 years old at the time.

The two women did not respond last week to phone messages seeking comment, and nobody was at the trailer when Seven Days stopped by last week. Adding to McAllister's legal woes, the female trailer tenant recently filed a civil lawsuit against him, suing as Jane Doe, with allegations that mirror those in the criminal case. She is seeking unspecified monetary damages.

McAllister is representing himself in the civil suit, according to Franklin County Superior Court records. He said he is struggling to pay his attorneys in the criminal case. The total bill, he said, will exceed $100,000. He fears he will lose his farm.

He still gets rent money for an apartment attached to his house. Melinda Hulbert, 31, has been McAllister's tenant there for 11 years. She ambled onto the porch to tell a reporter that for many of those years, she was raising her three young children alone. When money was short, or she needed to skip rent so she could buy Christmas presents for her kids, McAllister always helped, she said.

She said she believes he has been falsely accused.

"Norm doesn't deserve this crap. He's a good man," Hulbert said. "He's done nothing but good for me and my family, or I wouldn't have been here for 11 years. There's never been any situation where I've felt uncomfortable with Norm. No, nothing. There's no way the man forced himself on anyone. No way. I don't believe it."

Son Heath McAllister also stopped by McAllister's house last Wednesday. In contrast to his dad, he struggled to keep his anger subdued when talking about the charges filed against McAllister. He said his parents always allowed boarders — many of whom were complete strangers — to stay in their apartment if they asked. He, too, is adamant that McAllister is the victim of false allegations.

"Here's the part that kills me. For 40 years, the door has always been open to anyone who asked," Heath McAllister said. "People came hat in hand. Half the people around here started in that apartment. You're talking about a guy who has said 'yes' to just about everybody. He ain't giving any more. I'm glad my mom isn't here to see this."

While fellow legislators and the state's top Republican, Lt. Gov. Phil Scott, have called on him to resign, McAllister has refused. He said he hasn't made up his mind but is leaning toward returning when the legislature convenes in January.

"Everything in me wants to, because I know I didn't do anything wrong," McAllister said. "It's too early yet to make that decision. But it will be hard. I'll have you and all the rest of you chasing me around the Statehouse," he told Seven Days.

McAllister sounds like a man who isn't done with state politics. He gave a long soliloquy on how dairy farmers are struggling to meet new water-quality standards, and he decried proposals to install windmills in Swanton. But his primary concern, he said, is that many lower-middle-class Vermonters are struggling to find work.

Furthermore, his experiences with the legal system have him pondering whether any laws can be passed to help protect people who are accused of crimes but eventually exonerated. "I don't know what that would be," he said. "We have all sorts of laws for the so-called victims, but in the end, someone like myself — don't I end up a victim? And what's my recourse? If it can happen to me, it can happen to anybody."

These days, McAllister's life is quiet, he said, even boring. He sleeps about four or five hours a night, works on his farm raising vegetables, attends his grandkids' soccer and football games, and roots for his beloved New England Patriots on Sundays.

He has ventured out on a few occasions. As he does every year, McAllister visited Franklin County Field Days at the end of July. Most people, he said, were kind, though one young farmer asked why he hadn't resigned.

In September, McAllister went to the Tunbridge World's Fair with some family members. While watching the oxen pull from the grandstand, he noticed a woman staring at him. For a while, McAllister thought that he knew her, but he couldn't remember her name. As the event ended, she walked over to him.

"I want you to know I think you're a fucking pig," she told him.

It left him shaken, he said. McAllister figures it's an indication that others in Vermont may feel the same.