South Burlington poet Seth Steinzor recently completed a 17-year project: writing a modern, personalized version of Dante Alighieri's The Divine Comedy. Steinzor's three books — To Join the Lost, Among the Lost and Once Was Lost — take their form from Dante's Inferno, Purgatorio and Paradiso, respectively, using the same structure of 100 cantos written in verse. But instead of featuring Dante being led through the afterlife by his beloved Beatrice, the story follows a secular Jew named Seth who tours hell, purgatory and paradise under the double guidance of an old flame named Victoria and Dante himself.

Steinzor, 68, worked in the Vermont Attorney General's Office for 32 years, 27 of them as an assistant attorney general primarily focused on civil rights and Medicaid fraud. His moral universe is not Dante's — the Florentine poet's trilogy ends in a face-to-face, of sorts, with God. But Steinzor's is similarly ambitious in scope, political relevance and philosophical depth. And it contains some beautiful lines of poetry.

Seven Days reviewed Steinzor's first two books. For the third, which comes out in June, we opted to interview the author. During a phone call, Steinzor said that Dante took slightly longer than he did to write his trilogy — approximately 20 years. It's no wonder each project took so long: As Steinzor writes in his third book, poetry is "unsurpassable in its power to posit / with precision what can't be said." What follows are those things that could be said.

SEVEN DAYS: When did you first read The Divine Comedy?

SETH STEINZOR: My parents had a copy of the John Ciardi translation, and I remember dipping into that in high school, then coming back to it in college. I kept on coming back to it because, apart from the fact that it's an exciting and vivid story — I like science fiction a lot, and this is 14th-century science fiction — I just kept on feeling like I'd never reached the bottom of it. Every time I dived in, there was something more to understand about what he was saying about the world.

It's a funny sensation because you're in dialogue with this very opinionated guy from the 14th century who's devoutly Catholic, and yet, despite the archaic and obscure ideas he's presenting, I could never escape this sense that he was accurately describing the world that I live in.

SD: What span of American history was unfolding while you were writing your trilogy? How much did current events act as prompts?

SS: I started writing it during the [George W.] Bush administration. The time frame in which the story occurs is roughly the end of August 2005; there's a [Hurricane] Katrina victim in the third book. Dante was intensely political. He was talking about the political figures and events of his time. He was extremely specific about Florence in the late 1200s, early 1300s. I decided that's where I'm going to go, too — the preceding 20 to 30 years in America and sometimes in Vermont.

SD: You set Among the Lost, about purgatory, in a rust-belt city similar to Buffalo, N.Y., where you grew up. Why is your paradise, in Once Was Lost, a beach with a fried-clams shack? 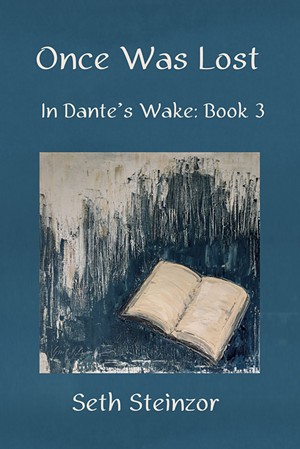 SS: A beach on the North Atlantic eating fried clams — I mean, how much closer to heaven do you get? I happen to have very fond memories of standing on a beach on the Gaspé Peninsula [in Québec] at night, looking at the moonlight coming across the water. I felt, looking out at the stars and the water, their utter indifference to me; and I felt behind me, reaching back to the campground and the communities behind, the huge network of people in which resided all the love that sustained me. I felt both of those things at the same time.

That's where I got the idea for the setting for paradise. Heaven isn't in the spheres, for me; it's all right here with us, right now, coexisting with hell and purgatory.

SD: Seth meets a large array of figures in paradise, including Karl Marx, Sigmund Freud, Eleanor and Franklin D. Roosevelt, and Bob Moses, who helped lead the Student Nonviolent Coordinating Committee in the civil-rights era. How did you decide who was going to be included in heaven?

SS: Each of Dante's cantos is directed at a certain set of ideas. I used those as prompts: Who would come to mind in relation to this? was basically it. One of the things that blows me away about Dante is how all-inclusive he is; he just gets the whole world into his story. I tried to accomplish that, but even in a huge work like this, you're constantly trying to limit yourself because you've gotta maintain some focus.

SD: I had to google some of your characters in paradise. How did you come up with the ones that take shape from columns of sand, named Dawash of Akhvilli? I couldn't find anything about them.

SS: Sometimes a character pops up and says, "You're going to write about me. I just belong here." That's what happened with that canto. It made it very difficult to write. Actually, I googled [Dawash of Akhvilli], too. I thought maybe this is some sort of memory of something I had read somewhere, but no. They're the spirit of welcoming. Dante has things transforming into other things. In Paradiso, the stars will dance around and form patterns.

SD: Does Victoria correlate to anyone in your life, as Beatrice did for Dante?

SS: Vicky was someone I knew the year I spent in Italy. I was 16; she was a year younger. My dad was a college professor of ceramics in charge of a junior year in Siena. [My parents lived in Siena while] I attended a private school in Florence. I stayed in a pensione during the week and took the train home on weekends. (Get this: The name of the pensione was Pensione Beatrice.) Vicky attended the same school. She was the first girl I fell in love with. When we returned to the U.S., she to California and me to Buffalo, we corresponded. After only a couple years, she ended up dying in a car wreck. It was traumatic — for her, certainly, but also for me. The character is drawn from her, but it isn't her. She's my Beatrice.

SD: You write in verse, like Dante, but he used terza rima — three-line stanzas with an ABA, BCB rhyme pattern. How did you choose 10-line stanzas?

SS: You can do [terza rima] in Italian because everything rhymes with everything else. I can't do that in English — though it's been done, which amazes me. I wanted to pay homage to at least some of his formal work. Numerology is really important to Dante, especially the number nine. My stanzas are Dante's nine plus one more line. [For the meter,] the first line will have five stressed syllables, the next will have four, and back and forth. In the third book, every line begins with a stressed syllable because we're in paradise and something is needed to set that off from the other two places.

SD: Your first volume, To Join the Lost, seemed to have more humor in it than your third, Once Was Lost. What was the progression like, from writing the first one to writing the last?

SS: It got harder. [In Inferno,] greed is greed and solipsism is solipsism and callousness is callousness. As you go higher in [Dante's] moral universe, you gotta go deeper to find out what he's talking about. Inferno is the best story: It's got monsters; it's got violence. There are times when he's escaping from demons. It's got Satan. It's really an action flick.

It blows me away that nobody has made a blockbuster movie. Matthew McConaughey is Dante; maybe someone will figure that out. But in purgatory, not a hell of a lot happens. Then you get to paradise, and the whole thing is him talking to various saints about theology.

SD: What have you been reading lately? Will you ever reread Dante?

SS: I'm reading Anthony Trollope. I love Victorian novels, and Trollope was a particular favorite of my mother's. Oh, yeah, [I'll reread Dante]. He's the indispensable writer. You could burn the rest of [literature] and, if you kept him, you wouldn't have lost that much.