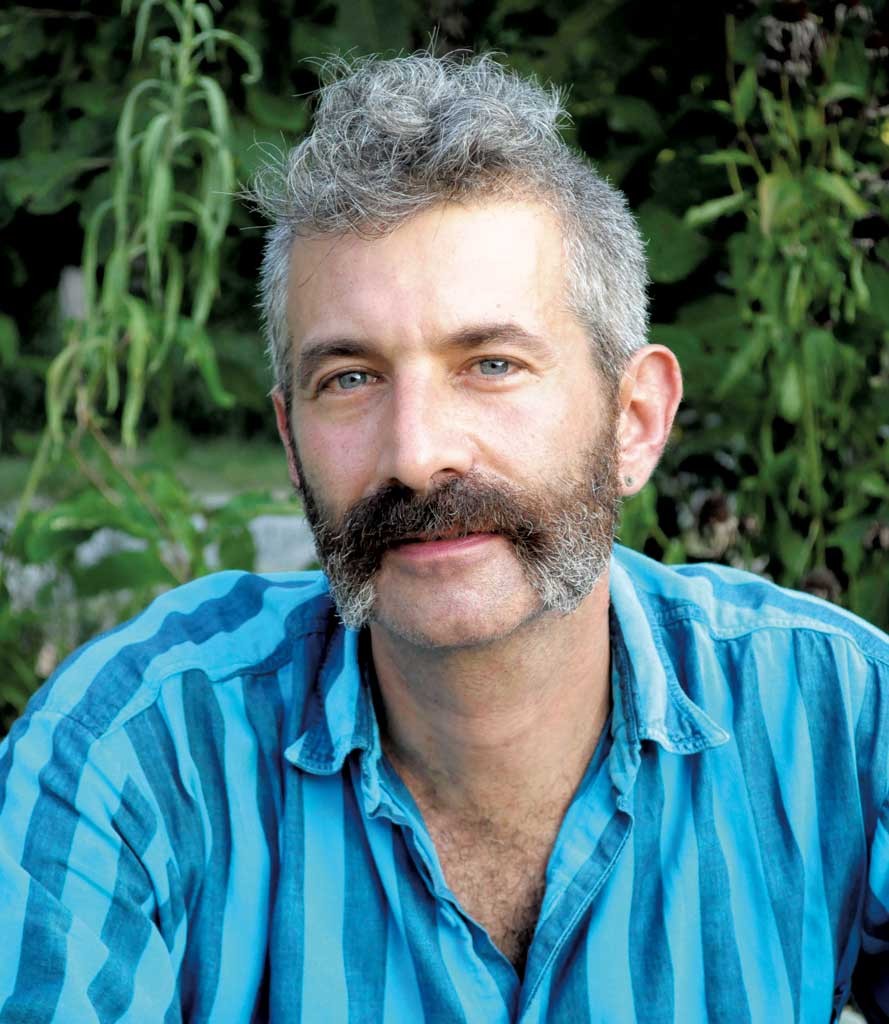 This will be the summer of Sandor in Vermont. Sandor Katz, author of the books Wild Fermentation, The Revolution Will Not Be Microwaved and James Beard Foundation award-winning The Art of Fermentation, will spend the month of July teaching and talking all over the state.

The Tennessee writer also known as "Sandorkraut" (both in real life and on Twitter) published those books through Chelsea Green Publishing in White River Junction, but his Vermont connections go back further. In 1986, Katz cycled from Burlington to Hartford, Conn., chaperoning a group of teenagers and checking out the nooks and crannies of the Green Mountains along the way. He recalls it as "the best summer job I ever had."

Katz's latest local foray started when he signed up to teach a two-week-long class at Sterling College in July; interest in the course quickly led to several smaller gigs across Vermont. At Sterling, Katz will teach students the basics of fermenting garden-fresh veggies, as well as instructing them in making miso, kefir and yogurt; sourdough; and fruity, lightly fermented beverages.

In anticipation of Katz's visit, we asked him some questions that probably aren't part of his planned curriculum.

SEVEN DAYS: Tell us about your experience with Vermont food.

SANDOR KATZ: The first thing that comes to mind is maple syrup. The last time I was in Vermont was during sugaring season last year, and I visited some friends of mine and a sugar shack they were running. I spent a little bit of time at Bread and Puppet [Theater], and actually I have some of [founder] Peter Schumann's sourdough mixed in with my sourdough from before I encountered him.

SD: You've been HIV positive for decades. Did focusing on your health enhance your interest in fermented food?

SK: It's a tricky question. When I wrote Wild Fermentation in 2003, my little bio said — I believe the wording was "Fermented foods have been a part of my healing." From that many people extrapolated that I somehow cured AIDS or removed HIV from my body using fermented foods.

I'm just trying to be clear with people that that's not the case. Live-culture foods that have their probiotic bacteria intact can stimulate immune function. They can improve digestion and nutrient assimilation. Now we're learning they can improve mental health.

I've been on HIV meds for 14 years now. I wish I could say, "Oh, good eating kept me healthy," but I had a health crisis in 1999, and I've been on meds ever since then. I've certainly observed that I have not had the digestive problems that other people I've met that have been on HIV meds have. I have a strong sense that my relatively good health and well-being has had something to do with the fermented foods I've been eating.

I'm trying to be careful and cautious. The first day of class [at Sterling] will be a broad survey of how fermentation transforms food. And how it transforms food nutritionally. We'll get into some of that. I'm really trying to stay away from being a health guru and making people think that eating sauerkraut is going to solve all of their problems. It might solve some.

SD: Have you taken other major dietary steps that you think may have improved your health?

Not that I'm a vegetarian. I have a garden, and I eat a lot out of my garden. That's a big part of it. I try to spend a little time grazing every day. I'm not eating vast amounts of it. I spend three minutes clipping tops off. I'm really interested in eating different parts of the plant. I'm really interested in eating radish pods and other brassicas [members of the mustard family] that have overwintered.

SD: Are there any fermented foods you don't like?

SK: There are certainly fermented foods that I haven't tried. I'm super interested in all the Arctic fish traditions, but I've never been in that part of the world.

The first time I tasted natto [fermented soybeans with a distinctly mucosal texture], it held no appeal at all to me. I found it really kind of gross. I read William Shurtleff's The Book of Tofu and The Book of Miso and cited them in Wild Fermentation. After he read it, he sent a letter mostly saying congratulations and also offering a little bit of critical feedback. Anyway, I said, "I'm going to give this natto another try." On my next try, it turned out I love it.

As a young person, I wasn't drawn to stinky cheeses. The stinky ones are kind of off-putting. Now if I can smell it a mile away it makes me more interested in it. A few years ago I got the chance to go to Hong Kong and try stinky tofu. I couldn't for the life of me figure out why it was so notorious. I can't think of any ferments I don't like.

SD: Which country has the best fermentation culture?

My family all came from Eastern Europe, [which] has incredibly wonderful fermentations, and I feel really drawn to Eastern European styles of fermentations and certain European ferments such as kvass. It's a beverage made of old, stale bread. The first time I tasted that, I felt like I was born for this flavor.

SD: What is your personal favorite thing to ferment?

I love yogurt. I've kept the same yogurt culture going for probably four years now. I probably just make yogurt once a month or so. I take a gallon of milk and make eight pints of yogurt and put them in pint jars.

I mentioned my sourdough earlier. When I'm at home, I don't bake a lot of bread, but I make a lot of savory vegetable pancakes. Lately, I've had radishes in my garden and walking onions. I mix my sourdough starter with that and some eggs, grate some cheese in it and leave it overnight to get all bubbly. Sometimes, I'll keep eating the same batter for a few days and keep eating it topped with yogurt hot sauce.

SD: Many of our readers are experienced picklers, cheese makers and brewers. What's the next thing they should try fermenting that they may not have thought of?

SK: It's really clear to me that the first thing to recommend for people is fermenting vegetables. It's so straightforward and simple; it's so intrinsically safe. You don't need any starter cultures; you don't need any special equipment. Beyond that, it's really whatever people are into.

If you love to drink beer, learn to make that. If you love to eat salami, learning to dry-cure sausages is something that will be really rewarding. Baking with sourdough is really fun, and it's not that straightforward, and usually there's a learning curve to getting the timing and technique right.

And then there's all these crazy, exotic ferments with weird names, and I love that world. That's why I've written my books: to share. There isn't an obvious next step for which ferments to do. None of them is rocket science. They're all things that interested generalists can do in a standard home kitchen. Some of them require a little more special equipment than others. Some require the ability to control temperature to some degree.

One area of special interest of mine is what I would call lightly fermented beverages, things that are not fermented for a long time to acquire a lot of alcohol, but fermented for a short time to get bubbly effervescence, a little bit of a sour edge. Going into summertime, that's really fun.

SD: What was the last thing you ate?

SK: I had lunch a little while ago. It was chicken soup that I made. I'm nursing a cold. I ate a little bit of sauerkraut on the side.

The original print version of this article was headlined "Fermentation Fetish"