What does a spy thriller about a Russian Jewish espionage agent have to do with standup comedy? Not much, unless you're talking with S. Lee Manning.

The author of Trojan Horse and its forthcoming sequel, Nerve Attack, has led a life full of her own sort of intrigue. During her career as an attorney, Manning was instrumental in helping abolish the death penalty in New Jersey. At age 68, she decided to become a full-time novelist. Her first novel about spy Kolya Petrov was praised by Kirkus and short-listed for an award from thriller conference Killer Nashville. Adding another feather to her cap, Elmore resident Manning took up writing and performing standup comedy in 2019, after attending classes at the Vermont Comedy Club in Burlington.

Manning combines her two great loves on Wednesday, September 22, with an unusual launch event for Nerve Attack called "When Comedy Kills," held right where it started for her, at Vermont Comedy Club.

Manning sat down with Seven Days to talk about the differences between the two worlds she finds herself inhabiting, and why James Bond kind of sucks.

SEVEN DAYS: You've had quite a colorful career. What made you decide to be a writer after you retired from being an attorney?

S. LEE MANNING: I've always wanted to be a writer. I actually used to write for a publication called Law Enforcement Communications; I was an editor. I lived with five roommates in New York City, and I got really tired of being poor! So I went to law school and became a lawyer for over 30 years. But I never stopped writing, no matter how busy I was.

SD: So you retired and decided to become a novelist. Was it just that easy?

SLM: Oh, my first novel had a very long history before I got it published. I submitted my first draft of Trojan Horse in 2005 to a contest held by the Mystery Writers of America, and I won! Which, in turn, got me read by an agent, who handed it to publishers, who all said, "Nice novel, but we're up to our asses in spy thrillers. No thanks."

I eventually got a contract with a place called Five Star, but they decided to stop publishing mystery and suspense books six months before mine was supposed to be published. Then I found my current publisher in 2018.

SD: Why a spy thriller? Is this an Ian Fleming thing, because you were in intelligence yourself? 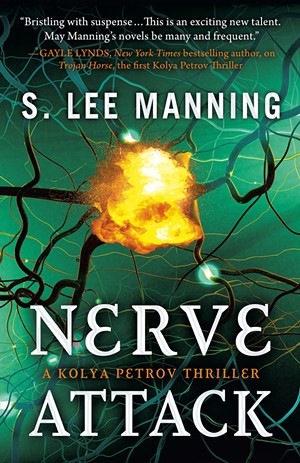 SLM: No, no. I just love the spy genre and have since I was young. I would put on a trench coat and follow people around shopping malls, trying to look inconspicuous.

I'm not a big James Bond fan; he's a little too macho for me. Maybe he was cool, like, 30 years ago, but nah. Not anymore. I like intellectual spies. Even if there's action, my characters have to use their brains instead of shooting people. I mean ... they shoot people, too, though. [Laughing]

Also, I'm intrigued by the similarities of being a spy and being a writer. I'm fascinated by people who have to hide what they are. Writers and spies both watch people and figure out how to use them. I'd say that's true, to an extent, with all of us. We all have insecurities or fears, and we pretend that we don't. People hide who they are all the time; it's just a bit more obvious with spy thrillers.

SD: OK. So, when you were following people around in trench coats as a kid, did you also see yourself doing standup comedy?

SLM: Ha ha, no, it wasn't quite that. It was right around the time I was getting sort of frustrated being a writer [that] I decided to take my first class at Vermont Comedy Club. And, well, I was kind of good at it, so I just kept performing; it was as simple as that.

I joke now that whenever I get tired of killing or torturing people in my novels, I take a break and do comedy. Though I was definitely nervous as shit the first time! I have an anxiety disorder. Honestly, I think three-quarters of the comics I've met have an anxiety disorder and are working it out onstage. One of my first jokes I ever told went something like this: I have a general anxiety disorder, but I don't know why they call it general, because I'm always anxious about specific things. Specifically, everything.

Comedy is similar to writing a spy novel, for the most part. In comedy, you create a persona onstage. You're taking uncomfortable situations with a lot of stress, and you're using that for the work. Comics do it for a laugh. The difference with writing a thriller is that you're trying to up the stress, rather than relieve it, as you do with comedy.

SD: Similarities aside, why hold the release party for a spy thriller at a comedy club? Are you going to read the more humorous excerpts from the book, or just hit people with the skulduggery and shooting?

SLM: I admit, it's weird! But it feels like that good kind of Vermont weird. I love VCC, and I missed it during the pandemic, so it feels very appropriate. It'll be great; I'll read some parts from the book — there aren't too many jokes in there, aside from the traditional spy quips — and in between there will be comedians doing their sets.

SD: I hope there are jokes about what a spy gets up to in Vermont, because I'm racking my brain.

SLM: Vermont would be great for spies! There are so many places where the fucking GPS doesn't work; it's so easy to disappear. Plus, [U.S. Sen.] Bernie [Sanders (I-Vt.)] makes a little cameo in the book, sort of. All the politicians in my books are fictional except for him. There's a scene where two characters land at the airport in Burlington, and one of them says, "Do you think we'll see Bernie Sanders?"

I'm going to drop him off a copy of [the book] and let him know that if he's never been in a spy thriller, well ... he is now.