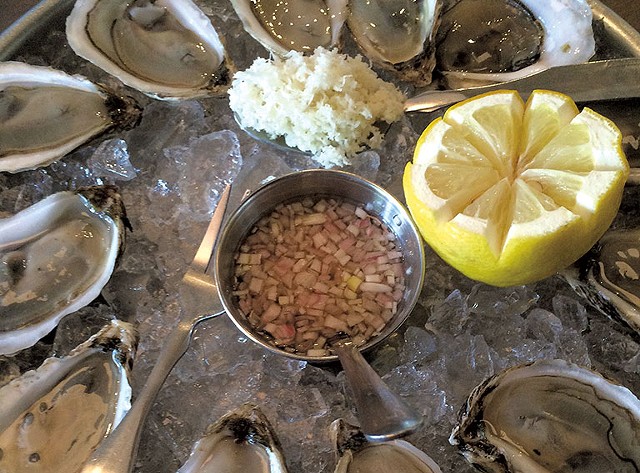 Most of the time, Calais resident Rowan Jacobsen describes oysters as if he were recalling lovers, his words like fingertips brushing across skin.

Of the Olympia variety, he writes: "I think this is the most gorgeous oyster in the world. Unearthly blacks and blues seem to flicker before your eyes, changing every time you glance back, like hot sheet metal." Yet he often punctuates his languorous descriptions with little shocks of visceral viciousness. "A good oyster smells like the sea breeze skipping over the shore. A bad oyster smells like a murder victim," he writes in The Essential Oyster: A Salty Appreciation of Taste and Temptation. "I prefer the former."

In 2007, Jacobsen published his first seafood-centric book, A Geography of Oysters: The Connoisseur's Guide to Oyster Eating in North America, which won a James Beard Award. He followed up on that book's success with a handful of web tools designed to help people find and enjoy bivalves. His newest volume, The Essential Oyster, hit shelves on October 4. 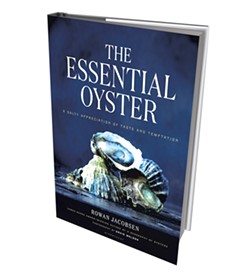 Those in the know will recognize that the book comes just in time. As the author points out, the old rule of R — that one ought to eat oysters only in months with that letter in their names — has been invalidated by modern production, shipping and storage. But Jacobsen still acknowledges in his book that most oysters are best between November and January, because, like bears, the shellfish fatten themselves in preparation "for the long winter dormancy."

For all their popularity, serving oysters at home can still be incredibly intimidating. First, using an implement sharp enough to puncture skin, you have to twist and pop to break them out of their shells. Then, knowing they're still alive, you slice the adductor muscle that clings to the shell, reminding yourself that these creatures have no brains and no hearts. And neither, perhaps, do you.

We wanted to know more about the art of eating oysters, so we asked Jacobsen — in Seattle on his book tour — a few questions.

SEVEN DAYS: What made you realize it was time for a second oyster book?

ROWAN JACOBSEN: The oyster world has kinda blown up since [the publication of A Geography of Oysters]. Probably a quarter of the oysters I wrote about in that book no longer exist. But, more importantly, there are hundreds of new ones, so much was missing.

That first book was really "oysters for dummies." It was a tool to make someone oyster literate so they could walk into an oyster bar with confidence. This time, it was [written] to capture the romance of oysters. Part of that was getting an opportunity to work with David [Malosh], who is a great photographer. In the first book, I didn't pay that much attention to oyster culture in different regions. This time I wanted to capture more of that and have really pretty pictures.

SD: Why do you love oysters so much?

RJ: It's not like I think an oyster is the most delicious thing in the world and I can't wait to put that sucker in my mouth. It's about the dynamic.

I did this event recently. It was very snobby. It was a super-high-end meeting of tea and wine people, each kinda trying to impress the other. So we had rare Champagnes, and we're trying those, and then drinking Pu-erh teas that are a big deal in China.

The wine people did their usual "I taste hibiscus and apples." I'd used the "wine style" of writing in the first oyster book. But the tea people were like, "Don't pay attention to what it tastes like; that's not important. Pay attention to how you feel afterwards."

That gets to the heart of why people love oysters. It's primal. It touches on the whole aphrodisiac thing, the surge you feel when you eat them. I say in the book that "they're more mood than food." They're a drug. That's why I love them: It's the spike. You feel intensely alive.

Plus, they're salty and go great with beer.

SD: What are your favorite accompaniments?

Have a cold martini to go with them. There's a recipe in the new book for a Dirty Dirty Martini with olive juice and oyster brine. It's a fun one.

And then — I got this from [Calais resident and food writer] Marialisa Calta — if I'm not eating them straight, [I add] just a couple drops of lemon and a grind of fresh pepper, even just the pepper without the lemon. I've never seen anyone else do it.

SD: If somebody is dead set on cooking oysters, how do you recommend they do it?

RJ: I'm not as much of a hard-ass about that. It used to be, "Oh, God, you're cooking the oysters!" I'm not as curmudgeonly anymore. Look at the recipes in the book. There's a really lightly smoked oyster that's really good. I think they're great in stews. The classic: super-simple oyster stew.

SD: Why do you think oysters are such a part of the hipster zeitgeist?

RJ: In part, it's definitely the drug thing. But it's also because they bring authenticity to the table — they're this hunk of the natural world. Most people don't get a lot of authenticity in their lives. [So much is] virtual, and the oyster is not virtual; it's real. Maybe a little too real.

SD: What would you say to someone who's intimidated by oysters?

RJ: I don't try to convince people from the other side of the fence to come over to my side. But a lot of people had a crappy oyster for their first experience. There's a huge difference between a really good oyster and a skanky oyster that's been knocking around the distribution center for two weeks.

When people say, "OK, I'll try," I give them something fresh and crisp, and make sure the first one's small.

SD: Are you worried about Vibrio? [Vibrio vulnificus is a virulent bacterium that thrives in warmer waters and can be carried by raw or lightly cooked seafood.]

RJ: Yeah, I think everyone in the oyster world is. It's definitely creeping northward. Oysters are pretty tightly regulated right now. States know these things are going to be eaten raw.

An even bigger change, climate-wise, is ocean acidification. There have been huge die-offs on the Pacific coast. It just dissolves the shells on little baby oysters. On oyster farms, they're trying to figure out ways to buffer it a little bit. You literally add baking soda to the water. For wild reefs, it's going to be a big problem.

RJ: With oysters, I don't like really hoppy beers. I like a really clean, crisp pilsner. Lost Nation [Brewing] has a pilsner. Hill Farmstead [Brewery] has [an ale] called Works of Love, which has Earl Grey tea in it, and it's only 3.7 percent alcohol. It's ever so slightly floral, and it's really good with oysters.

With cider, I like richer, full-bodied ones. The ones with a little more oomph to them are really good. [Eden Specialty Ciders'] new one, which is pure Northern Spy, is concentrated to 11 percent alcohol, and it's got some oak on it. It's less sweet than semi-sweet, but it's not pure dry. It's a perfect oyster cider. Their sparkling dry is great, too. And Shacksbury Classic is really good with oysters.

These days, oysters are pretty easy to come by. Supermarkets such as Hannaford and Shaw's carry them; the latter's website offers a quick guide to shucking. Wood Mountain Fish, Stowe Seafood and Black River Produce supply restaurants. The region even has an independent oyster farmer, John Brawley of Sweet Sound Oysters in Duxbury Bay, Mass., who shuttles his wares up from the coast.

Don't know a Wellfleet from an Island Creek? Here's what Jacobsen says in The Essential Oyster about the flavor of some of the more common East Coasters.

Beausoleil: "Light, yeasty and gently balanced, like an off-dry Champagne."

Katama Bay: "The full salt lick ... at the end comes a subtle pop of papaya."

Check the Bite Club blog this week for a list of upcoming oyster events and recipes for unusual mignonettes.

The original print version of this article was headlined "Shell Game"