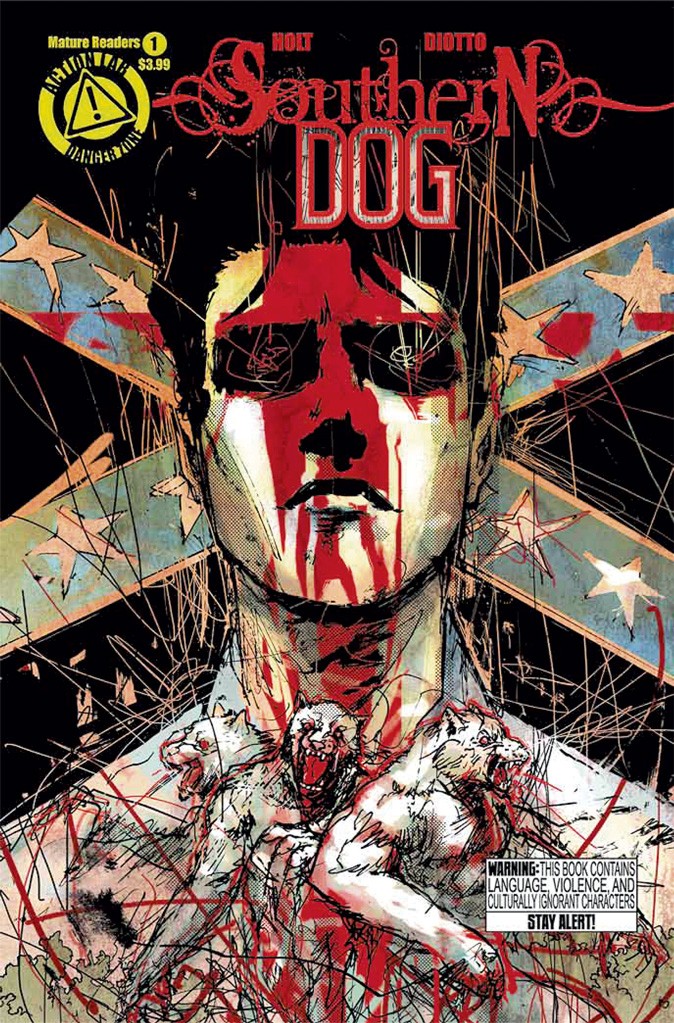 Race is a topic that saturates news media, movies, books and the American zeitgeist these days. But back in 2008, publishers wouldn't bite when Jeremy Holt began pitching "Southern Dog" — a four-part comic-book series that involves panic attacks, werewolves, high school crushes and the Ku Klux Klan, among other things.

"Everybody rejected it," said Holt, 32, sipping a whiskey at the Lobby in Middlebury one recent Sunday evening. "Nobody wanted to do a story about race."

After years of vicissitudes such as rejected pitches and failed collaborations, Holt saw all four issues of his series published in 2012 by Action Lab Entertainment. Illustrated by Italian artist Alex Diotto, "Southern Dog" became a runaway indie success. A critic at ComicBookBin wrote that it was "one of the most interesting reads to come along in the form of a mainstream comic book in quite some time." "Southern Dog" has been recommended on numerous comics websites and has sold out in retail outlets including Burlington's Earth Prime Comics. Action Lab rereleased the series as a graphic novel last fall.

"I think most people want to believe [racism is] gone," Holt said. "But it's not. When 'Southern Dog' was reissued last October, it coincided with Ferguson. And that event illustrated what I've always believed: It still happens; we just want to believe that we're evolved now."

"Southern Dog" is a coming-of-age story set in the contemporary South: Fort Payne, Ala., to be specific. Its main character is a teenager named Jasper whose values don't align with his dad's commitment to white supremacy. Within the first 20 pages, a werewolf bites Jasper while he is reluctantly hunting with his gun-toting father and older brother in the backwoods. He ignores the wound but soon learns he has been permanently altered: In high-stress situations — not at the full moon — he transforms.

Adolescence is tough for everyone, but Jasper is having a hell of a time. For one thing, he's got a maybe-requited crush on a pretty black girl at school. Then his family and peer group start dragging him to Klan meetings. What's a teenage werewolf to do?

The premise of "Southern Dog" came to Holt as a dream in which a werewolf fought off a group of Klansmen. "The imagery was really vivid, but I didn't know what to do about it," he recalled. The year was 2008; Barack Obama was running for president, and Holt had observed the noxious racist commentary circulating in the media and on the internet. Curious, he began researching Klan activity and the history of the organization; that, in turn, got his storytelling muscles working.

The author is no stranger to the South — or to racism. "I've experienced it in just about every city," said Holt, who is Asian American. He's certainly lived in a lot of places: Adopted and raised by white parents — along with his two brothers; they're triplets — Holt spent his childhood moving around the globe with his family. His father's job brought them to Singapore, Norway, England and, finally, to Texas, where Holt completed high school. He went on to attend Savannah College of Art and Design in Georgia, where he studied film.

Holt realized soon after graduating that he wasn't interested in film as a career. "I knew it wasn't what I wanted," he said. "It was like doing a job, a chore." He moved to New York City and worked jobs that didn't pay well. When one of his brothers gave him a comic book, he was smitten.

"He handed me '[BATMAN:] The Dark Knight Returns' by Frank Miller," Holt recalled, citing a classic comic book. "And I was just so blown away by it. I remember asking him, 'So is this what comic books are today?'" And he was like, 'No, that's 20 years old.'"

Holt, who'd always had a knack for storytelling, began writing. "I like telling stories," he said simply. "I don't have to convince myself to do it." However, it took several years — and story attempts — to break into the industry.

Now Holt has several projects in the works and is actively building his network of collaborators and friends in the comic book industry. He's promoting "Southern Dog" at national Comic Cons and bookstore events throughout Vermont. Holt moved to the Green Mountain State two years ago when his wife got a job at Middlebury College. By day he works in tech support for Addison County elementary schools; by night he writes comics.

Asked how Vermont audiences have responded to his tale of racism in the South, Holt said they have been more receptive than many prospective customers he encounters at events around the country. He added that Vermonters are game to take a chance on a lesser-known author once they find out he's a local boy.

"Honestly, in Vermont, the thing I've realized is that everybody supports local," he said. "I thought that only pertained to food! But I've realized it pertains to everything."

Jeremy Holt book signing, Saturday, May 16, 3 to 5 p.m., at the Flying Pig Bookstore in Shelburne.