Author Jack Mayer on Lessons of the Holocaust 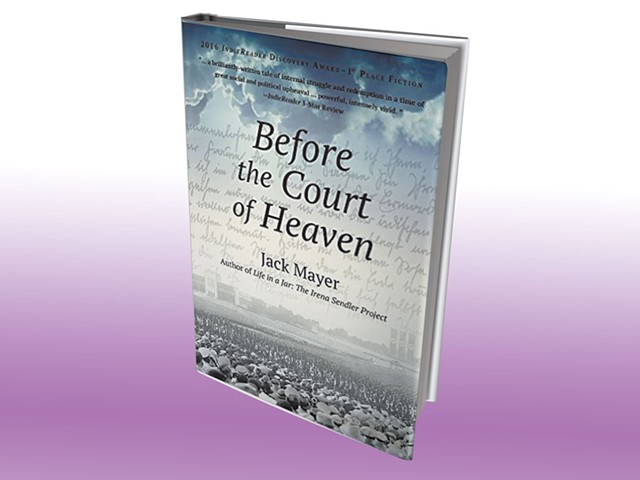 If you've never heard of Ernst Werner Techow or Walther Rathenau, don't worry — and don't let it keep you from reading Middlebury author Jack Mayer's Before the Court of Heaven. With its skillful conjuring of complex political, social and emotional forces, this historical novel takes readers inside events that unfolded in Germany in the period leading up to the Third Reich. Like Mayer's first book, Life in a Jar: The Irena Sendler Project (2011), Before the Court of Heaven, published in 2015, has picked up numerous awards, many of them for exceptional indie (self-published) fiction.

Until 1992, the names of Techow and Rathenau didn't mean much to Mayer, either. That year, in a Yom Kippur sermon at Middlebury College, Mayer learned about Techow's role in the 1922 assassination of Rathenau, the foreign minister of Germany's fledgling Weimar Republic. Rathenau was Jewish, and Techow was an early Nazi, a young man caught up in the nationalist, anti-Semitic fury of an extreme right-wing organization. Techow's trial made headlines around the world. The newspaper accounts, scholarly works and microfilm transcripts of his arrest, interrogation and trial form the foundation of Mayer's work.

What initially hooked Mayer was the story of forgiveness, which Rathenau's mother offered to Techow in an astonishing letter. What he did not know when he first delved into the background of his book — which took him 24 years to research and write — was that he would come to view those past events as a cautionary tale for the present.

These days, Mayer, who is also a pediatrician, is busy giving presentations about Before the Court of Heaven around the state. This year, he spoke at 13 bookstores and libraries, a writers' conference, a Rotary Club and a high school. The Vermont Humanities Council sponsored some of the talks; others were invitational or initiated by Mayer himself. He's already booked for four more presentations in early 2017.

Seven Days recently caught up with Mayer over coffee in Burlington to talk about history and what it has to teach us now.

SEVEN DAYS: The bio on the back cover of your book describes you as an author and a pediatrician. What came first?

JACK MAYER: Pediatrics first informed my writing. In elementary school I was a mediocre student, but one thing I really enjoyed, and did well, was to write stories. I started to write essays and poems about my patients during my first practice, which I opened in Enosburg Falls in 1976. It was an economically distressed time, and most of my patients were on Medicaid or had no insurance; they had difficult lives, and I was inspired by the heroism of ordinary families dealing with extraordinary challenges. As a solo practice, it was very demanding work.

I wrote mostly for myself, to process my experiences and to understand my patients. Eventually, one of my essays was published in the Journal of the American Medical Association. When Life in a Jar landed in my lap, that's when I felt like an author for the first time.

SD: Where did the title of your current book come from?

JM: It has a double meaning. Yom Kippur is the holiest day of the Jewish calendar — a day of atonement, a day to plead before the court of heaven for forgiveness of sins against God. When I heard the story of Ernst Werner Techow in that Yom Kippur service in 1992, I was deeply moved by the element of forgiveness and the possibility of redemption. But sins against our fellow human must be atoned person-to-person. What does that look like when one has murdered someone — the personal atonement that precedes that before the court of heaven?

SD: When you refer to the events in Germany in the 1920s and '30s as a cautionary tale, what do you want your readers to pay attention to?

JM: These events occurred in a constitutional democracy, with the rule of law and free elections. Ordinary people made free choices. We hear an echo of those times today in our political discourse, and we need to pay attention to that. No one of us can reverse this disturbing reverberation, but each one of us can do something, no matter how small, to promote decency, tolerance and respect for all people.

SD: How do high school students respond to your presentation?

JM: So far, I have only spoken to one high school class about Before the Court of Heaven [and Life in a Jar], at [Champlain Valley Union High School] in early December. They sat at rapt attention for one and a half hours. Many students came up to me afterwards as they left for their next class to thank me for animating this amazing history. I could tell from their faces and voices that they were not just being polite.

SD: In your talks, you often quote the Spanish philosopher and writer George Santayana, who said, "Those who cannot remember the past are condemned to repeat it." Do you think history actually repeats itself?

JM: History is cyclical, but we can never anticipate how recurrences will manifest — it's never identical. Some people point to the differences between Weimar Germany and the present situation, and they are correct — these are different situations. But we need to pay attention to the underlying conditions.

The German journalist Jochen Bittner recently pointed to four conditions that cleared the path for the fall of the Weimar democracy and the rise of the Third Reich: economic depression, loss of trust in institutions, social humiliation and political blunder. I would suggest that these conditions, though not identical, exist again today. I think what Santayana asks us to do is to recognize the painful echoes of history in these conditions and that, in this way, history can be a mirror that helps us to consider the present.

SD: You spent 24 years researching and writing Before the Court of Heaven. This is a big part of your life.

JM: The Holocaust is the iconic story of my life. My parents narrowly escaped the Holocaust — but it was not spoken about. The Holocaust was the elephant in our cramped apartment. I could feel the weight of sorrow all around me. It was not articulated, but it was everywhere — it was the atmosphere.

It was not until I was in medical school that I learned from my grandmother that my grandfather had been imprisoned at Dachau [concentration camp]. She was able to get him out after six months because she had gone to high school with one of the guards at the camp and was able to bribe him.

Still later, in the 1990s, my parents were interviewed for Steven Spielberg's Shoah project, and, for the first time, I saw my mother's identification card with "Jew" stamped on it and her nursing certificate from the Frankfurt Jewish Nursing School, stamped with swastikas.

So I have come to understand my mission with regards to Holocaust history — to be a link in a long chain of storytellers who help us remember. As a pediatrician, I immunize against infectious disease; as a writer, I invoke memory as our best immunization against the atrocities humans inflict upon each other.

Mayer is available for presentations and can be reached at jacklmayer33@gmail.com.

Arts News Books Jack Mayer Before the Court of Heaven the Holocaust Life in a Jar: The Irena Sendler Project history