Author Eve Schaub Talks About Her Year Without Sugar

A few years ago, Eve Schaub, a writer and resident of Pawlet, Vt., became convinced that sugar (specifically fructose) was toxic. Then she convinced her husband and two daughters to purge added sugar from their diet for all of 2011. The book she wrote about the experience, titled simply Year of No Sugar: A Memoir, came out earlier this month. It has stirred interest as far away as Ireland and Australia and garnered coverage from outlets such as Time magazine, Slate and National Public Radio. In advance of Schaub's talk next month at Phoenix Books Burlington, Seven Days rang her up to talk sugar. 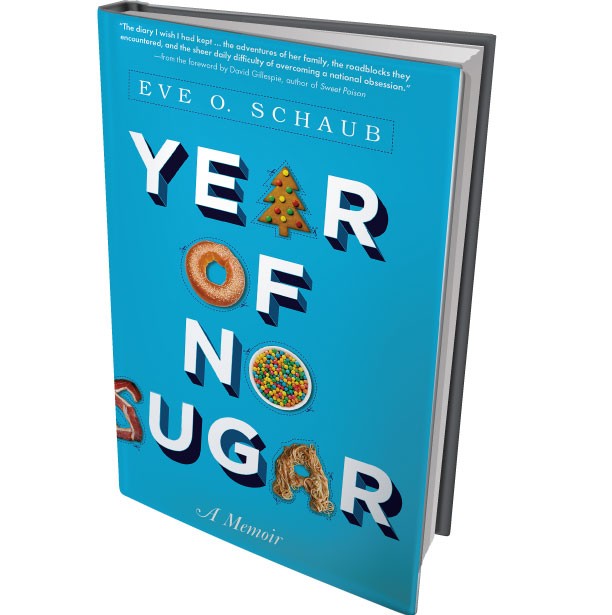 SEVEN DAYS: How did this come about?

EVE SCHAUB: I watched a YouTube video that someone had posted on Facebook, and in it Dr. Robert Lustig, a pediatric endocrinologist, made the argument that sugar acts in our bodies as a toxin. He makes the connection between excessive sugar intake and virtually every major health epidemic that we are suffering from today — from obesity and metabolic syndrome to diabetes, heart disease, hypertension, liver disease and cancer. It was as if, suddenly, I had been given a new pair of glasses and could see sugar everywhere, and it was causing all these terrible problems and nobody else could see it. I felt like I had to do something.

SD: Does your family still let you watch YouTube?

ES: They probably shouldn't. I write in the book that I think I've used up my lifetime supply of unreasonable requests.

SD: You blogged about the project from the beginning. Did that help keep you and your family honest?

ES: Absolutely. I felt like I had this great responsibility to not only stay on the no-sugar [diet], straight and narrow, but also to be completely up front with people when we made mistakes. I thought the most important thing I could do was chronicle the really tough parts and, in so doing, question, Should it be this hard?

SD: Did you know you were going to write a book about it?

ES: I think from the very beginning, I always hoped that it had the potential, but I wasn't sure. Then it became clear that there was more than enough information, stories and recipes. It was a very natural transition.

SD: You've addressed ad nauseam why you decided dextrose was OK to eat. We'll direct readers to your blog at eveschaub.com for an explanation, but since we're in Vermont, let's talk about what's so bad about maple syrup.

ES: That was perhaps the hardest of all to separate from. White sugar, molasses, high-fructose corn syrup: Those are all just terms. But maple syrup has a long and interesting history, and it's very symbolic and resonant in a way that other sugars aren't.

It's a tough realization to say all sugars are equal regardless of their history and symbolism. Whether it's fruit juice or maple syrup or honey or high-fructose corn syrup, they are all chemically equal.

SD: You joked at one point about having to tip more at restaurants after asking questions relentlessly. Did the experiment actually increase your food bills?

ES: Both the issue of expense and time — because I did do quite a bit of cooking and baking — are big sticking points for people.

I did not, during our year of no sugar, keep track or compare my receipts from the grocery store. But people often assume that eating without added sugar in your food means you're going to have to spend more money. I was curious to explore this issue a little more, so recently I did a mini experiment. Remember when I said I'd used up my quota of unreasonable requests? My family went, "You want to do what?!" But I said, "It's only for one week, I promise."

I think it was the USDA that defines a very tight budget for a family of four for one week as $146, and so I said, "That's what we're going to try to do, and we're also going to eat no sugar." The conclusion I came to after it was all over was that the real challenge wasn't finding things we could afford that didn't have sugar in them. The real challenge was that it's just a really small amount of money. Part of the reason for that was because I was sticking to things like produce.

But then you need time to prepare it, and that's how these two issues are connected. If you're talking about people who don't have time to actually make the food, that's when they are making the decision to buy the convenience food.

SD: You're back to eating sugar in moderation. Walk me through a week in sugar for you.

ES: When I go to the store, I'm still very stubborn. I'm still kind of mad about this, and so therefore I refuse to buy the items that have sugar in them that's hidden. The only thing I've made a concession on is I do buy mayonnaise, because I don't love making my own. It's really easy, but it lasts about three days.

But I don't buy the breads. I either make my own bread, or, if I don't have time, we're lucky because in the next town over we have a baker who makes his bread with four ingredients, and sugar's not one of them.

I pack my kids' lunches, but if there's something on the menu at school they really want — they'll say, "Oh, it's Taco Day!" — then they'll get the tacos. And I know for sure there's sugar in them somewhere.

Maybe once every couple weeks we will have a sugar-containing dessert, and it will be for some special occasion.

SD: The book seems to have struck a nerve, and there have been some negative reactions. Why do you think this sweet subject inspires bitter responses?

ES: A couple of reasons, I think. We're all getting nutritional advice fatigue. Like, "Oh, my God, if you tell me one more thing I'm not supposed to eat, I'm going to explode." [For examples, see sidebar.] People don't want to hear that anymore, and I don't blame them.

And then you have people with specific medical concerns. You've got people who are diabetic and they come to me and say, "You can't use dextrose." I'm like, "Listen, I'm not a doctor and I'm not a nutritionist, and I'm fortunate that nobody in my family suffers from any specific medical issue that we were trying to solve or deal with." I definitely recommend that anybody who does have diabetes or any other medical issue consult their doctor and talk to them about it. I'm definitely not trying to give advice on anything like that.

A third reason someone could have a negative reaction is simply a misunderstanding. Sometimes people say you couldn't possibly do a year of no sugar because then you would die, and then I explain the difference. Glucose is fine, fructose is not. If we tried to live a year without glucose, I wouldn't like our chances. But if I were to title the book A Year of No Added Fructose, how many people do you think would be interested in it?

SD: You've certainly helped propel a conversation about sugar, and I'm wondering if you have plans to engage in any other type of anti-sugar activism.

ES: No, I don't see that. I'm happy to talk all day long about it because I have a lot to say, but I don't intend to go on a crusade. I hope people will read the book and enjoy it, because I hope it's written in a way that's relatable and interesting.

SD: Now that the experiment is over ... you're making pancakes. Are you going to put maple syrup on them, or not?

ES: No. No maple syrup, but I'll cut up bananas and whatever fresh fruit I have around, and I'll sprinkle those on top.

SD: You're sitting down to dinner. Wine or water?

ES: Wine is fine! All those sugars are being converted into alcohol, so — as long as it's a dry wine — when you get to the end product, the amount of fructose that's left is infinitesimal.

SD: Ben & Jerry's or the recipe for banana "ice cream" you describe (one ingredient: bananas frozen, then blended)?

ES: Banana ice cream! There's a part in the book where I write about Ben & Jerry's. We're in Florence [Italy], and we walk by a Ben & Jerry's. It was like I was an alien from another planet and I was peering into the window, curiously looking at this American ice cream purveyor. The flavors are insane. I was noting, at the time, a real cultural difference in the way Italians approach sugar and the way Americans approach sugar, and I was like, Do the Italians think we are crazy, and are they right?

The original print version of this article was headlined "Sweet Talk"

Schaub's book inspired Seven Days staffers to consider what foodstuffs they might forgo — or not — for a year. With a few exceptions, we are not an ascetic bunch.

Margot Harrison (associate editor): The year of no lobster, truffle oil or molecular cuisine. Oh, wait, that's every year for me. I prefer to splurge on basics like great local cheese and bread.

Alice Levitt (food writer): I've cut out grains and lived to tell about it, but when my editors challenged me to go veggie a few years ago, it almost killed me. Losing meat made me doubly hungry for dessert. But a giant brownie sundae just can't replace a steak.

Michelle Brown (account executive): My husband and I have been sugar-free for about two years. We are also cutting way back on gluten; we don't eat any processed foods. Not sure what else we could cut...

Dan Bolles (music editor): Does "reading books about people who stop or start doing something for a year to prove a point we all already kinda know" count as something I'd willingly give up? I think it would be a dietary improvement for my soul.

Pamela Polston (associate publisher, coeditor): Pistachios. The salted, in-the-shell kind. I am unaccountably addicted to them, but probably because I love salt — and I sure as hell won't give that up. Maybe I should switch to something else. Chocolate? No way. Wine? [Uncontrollable laughing.] I've got it: No squid for a year! I'm sure people would love to read about how I survived a year without squid. Wait, I don't eat things with tentacles already. Hmm. Can I get back to you on this?