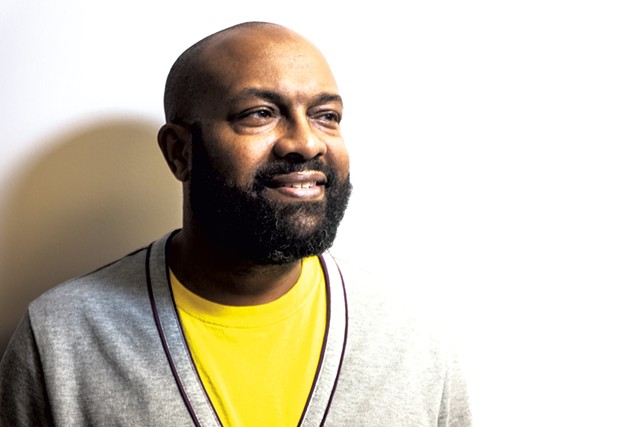 Bookstock Literary Festival, the state's largest event devoted to reading matters, returns this weekend for the ninth consecutive year. Friday through Sunday, more than 50 presenters will gather in Woodstock to celebrate literature through readings, plays, a book sale and live music. Special events include a virtual-reality demonstration by students of Champlain College's Emergent Media Center, a juried exhibition of book art, and one-act plays written and read by high school students.

Middlebury College writer-in-residence Julia Alvarez and renowned Vermont printmaker Sabra Field are two of the festival's headliners. They'll read from and discuss their new picture book Where Do They Go? that explores what happens to loved ones when they die. Vermont filmmaker Jay Craven will present a tribute to late author Howard Frank Mosher and screen Where the Rivers Flow North, his film based on Mosher's novel of the same name.

Speakers will also address race, gender and animal-rights issues. Among them is Jabari Asim, associate professor and graduate program director for creative writing at Emerson College. Seven Days caught up with Asim before his first trip to Vermont.

SEVEN DAYS: What has been your experience with book festivals and their audiences?

JABARI ASIM: I really like doing book festivals. It's the bread and butter for writers like me. Book festival audiences are possibly the best audiences. They're there because they want to engage with readers and writers. That's one of the reasons participating in them, as an author, is so rewarding. Your ideal readers are going to be found, typically, at book festivals.

SD: What will you be reading at the festival?

JA: They asked me to read and present from my book The N word: Who Can Say It, Who Shouldn't, and Why. The book is 10 years old this year. It's unusual for book festivals to ask me to present from a book that's so old. Usually, they want to know whatever it is that you just did. But it's a book that has legs. It has managed to sustain interest. I'm happy to talk about it.

SD: In the last decade, what has been the response to your book?

JA: People have questions about the origin of the word. One of the things people ask is, should it be banned? I'm not especially interested in making an argument. The subtitle comes from the marketing department, not from me. It was not a word I was allowed to say while growing up, and I wanted to know why. I just wanted to know more about it. The book came from there. Readers want to know what I found out.

SD: Why do you think there's sustained interest in the book?

JA: It's very much, in many respects, the book of the history and culture of white supremacy. I really wanted to look at this book within the context of our contentious history here in the United States, our responses and reactions to white supremacy, and some of the different forms it has taken recently in the presidential election and [in] police brutality, et cetera. It's hard to do a book like that without addressing those kinds of issues. Unfortunately, American racism never goes out of style.

SD: What are your thoughts on Bill Maher and his use of the word on his show?

JA: I've never watched his show, and I've never shown much interest in him. What we want to avoid in that particular situation is to bring more attention to him. Sometimes, white liberals feign ignorance around the word, but I find that disingenuous at best and dishonest at worst.

SD: You weren't allowed to say the word while growing up. And you've apologized to your parents during book discussions. What do they think of your book?

JA: They're really proud of me. They understand what I was trying to do with the word. And I apologized to them because, you know, no matter how old you get, you're still a dutiful child in front of your parents. And so, I wanted to honor and acknowledge them and let them know that it was purely an intellectual exercise for me. I wasn't engaging in gratuitous profanity.

SD: Are you working on a new book?

JA: In January 2018, I have a book coming out called A Child's Introduction to African American History. In October 2018, I have another book called We Can't Breathe: American Notes. That will be a collection of essays on race, politics and culture. And I have a novel that, I hope, will come out in 2019.