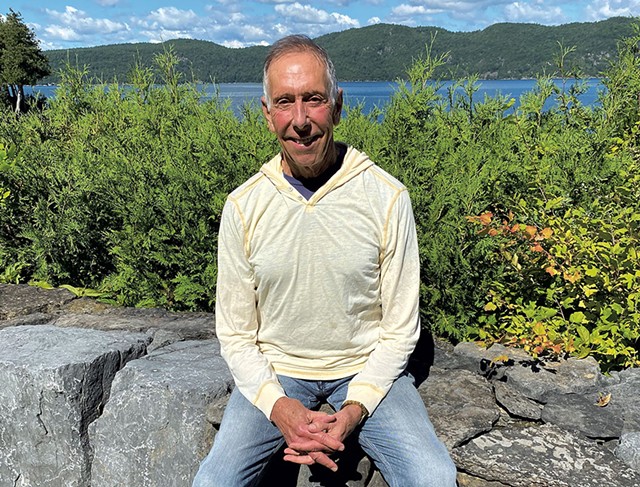 If you ask someone how they hope to die, most people will ... well, they'll look at you in fear, confusion and/or shock and probably scurry away. Those who stick around long enough to answer might say something like, "In my sleep, blissfully unaware."

Indeed, slipping peacefully away into dreamland with no pain or suffering is typically considered the ideal way to depart this mortal coil. But Alther, an author, painter and competitive swimmer who lives in Ferrisburgh and Palm Springs, Calif., isn't convinced.

In his latest book, Bedside Matters, Alther explores end-of-life issues through the eyes of Walter, a dying tycoon. In a series of deathbed interactions with family and caretakers — along with an assist from the works of 13th-century Persian poet Rumi — Walter comes to a different and deeper understanding of his life and humanity in the days immediately before he leaves it.

"Death gets a bad rap." Richard Alther tweet this

Alther's fifth novel is a quiet exploration of how we prepare for death — or, maybe more accurately, how we don't. But it's also a rumination on how life and death are inextricable and how accepting the inevitability of dying can reframe how we approach living, even in our very last moments. As former Vermont governor Madeleine Kunin wrote in a book jacket blurb, "Bedside Matters is a rich and articulate example of how truths fall into place towards the end of a life. Richard Alther has written with sensitive insight into the mystery of death."

SEVEN DAYS: What inspired a novel-length rumination on death?

RICHARD ALTHER: Each of my books has been inspired by a subject by which I'm compelled to spend two or three years to dig into, saturate myself. They're issues that are fairly contentious, raising a lot of questions and various points of view for me to snoop into, but not necessarily come up with a resolution. I do a tremendous amount of reading, mostly nonfiction, to screw up the courage to tell a story from those issues. 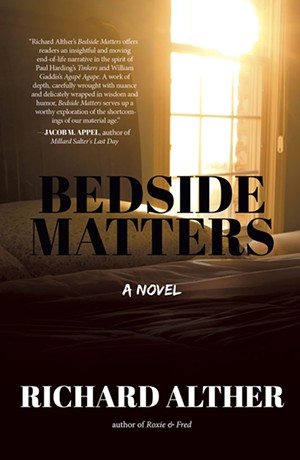 The issue of mortality — I think all of us have had experience with death, probably from childhood on in various ways. How we incorporate death is entirely different for each individual. As a young boy, I'll never forget being in a funeral home, standing next to a casket and looking at my grandmother, this waxen, otherworldly figure — she never wore rouge — and thinking, Holy cow. That's not Nana. And, Death is not life. Death is something over here.

In our culture we are so infused — and for the most part, appropriately — that life is for the living, and we're encouraged not to think about death. In my case, I came of age reading Saul Bellow, Bernard Malamud and Philip Roth. And their characters got to me because they were grasping for a life while they had it, which underscores the fragility of life. So I went off in that direction early on. And for me, personally, there were suicides, and then I lost three dear friends to natural causes in my early thirties. And they left scars on my soul.

SD: Death is a difficult topic to talk about in part because of the finality. What I find hopeful about your book is the idea that change is possible, even up to that last minute.

RA: From the start, I wanted to make Walter a curmudgeon and a highly privileged character — white, very wealthy, male — so that I could spin the story from where we started to how his concept of himself erodes to acknowledging, really for the first time, the plights of other people.

So the characters in the book help Walter shift from his self-focus to a more immediate one, on these people as he's engaging with them. He's not thinking about his past, the future or his impending death. They are bridges to what he's about to do.

How I would describe it is that Walter winds up as an everyman because of these interactions. He comes to realize that he's simply a soul, like all other living things. And, ironically, that's a source of expanding his view of life and looking back to the way he's been.

It's tricky business because we don't talk about death; we do try to shove it aside. Death gets a bad rap. What I wanted to show was the other side of the coin. That death is intricately a part of life.

SD: Why do you think death gets such a bad rap?

RA: As a culture, we're obsessed with prolonging life at all costs. Even when there's a living will that says, "Don't resuscitate me," it gets blurry. And I would argue that obsession with prolonging life is depriving the dying person of a more natural leave-taking leading up to the death — forgiving or not forgiving, having an important dialogue with someone. When those things happen, the loved ones who are left have a lighter burden of grief, because they, too, have been able to let go.

But it's so ingrained in us: "Carpe diem." "Hold on for dear life." "Today is the first day of the rest of your life." "Life is short." And that's good. Live every day to the fullest. But these clichés sink down into our very being, and they aggregate into, I think, the basic message of the book.

I hear all the time, "Oh, I just want to have a heart attack and go." But I suspect for the average person dying, there's a good measure of time in that decline, so there is opportunity to engage in some of this thinking and reflection. And we're seeing in the pandemic that people are being cheated of that, people in the ICU dying alone. What a horror that is. And it's another reason why a little preparation can go a long way.

SD: Walter is an unlikely candidate to be taken by the poetry of Rumi. Why use his work to enlighten Walter?

RA: He is an unlikely candidate. Rumi is a vehicle, among several others in the book, for Walter to move beyond his concept of himself. Rumi has lasted centuries because he turns everything inside out. He's also funny and amusing in his poetry, so he's very accessible.

I wanted to find ways for Walter to fritter away his days. But it occurred to me that because Rumi is quixotic and delightfully surprising and he picks up on people's follies, it parallels what Walter is doing with his recollections, his memories. He's replaying a lot of his past and coming to different interpretations about them. So there are little parallels there that tickle him, that help Walter crack a smile.

Walter wasn't even a reader, so he's like a blank slate to these provocative poems. And Rumi provokes, in an affectionate way.

SD: What was the biggest challenge for you with this book?

RA: I thought it was presumptuous for me to devote a whole novel to this. Because death is in every novel, but it's usually couched in layers of plot. I wanted to put a laser beam just on the heart and soul of this one character and keep it held steady there. The challenge was how Walter could be made accessible and cause a reader to say, "These are good things to think about."

SD: How much of you is in Walter?

RA: Most authors start with auto-biographically juiced fiction. But this was the first chance for me to really write about what I don't know. So Walter was my vessel carrying the story forward. I knew where it would end — his death. But I was learning so much along the process. If we follow this craft, we go more and more inward to dig into ourselves, even into the subconscious, for material we couldn't ordinarily access.

I kept thinking of impressionist paintings. They're so popular because they're not literal and they invite the viewer to complete them. So you participate in them. And that's what I was striving for in this story. It's not specifically clear how Walter brings himself to the brink.

And I've wondered if I could let that happen the way, fictionally, I've made Walter's death. Could I internalize that? As a writer, it was kind of a dress rehearsal for me. I would like to emulate the path that he took. And I wonder if I would be able to.

The original print version of this article was headlined "Way to Go | Author and painter Richard Alther on life, death and his new novel, Bedside Matters"