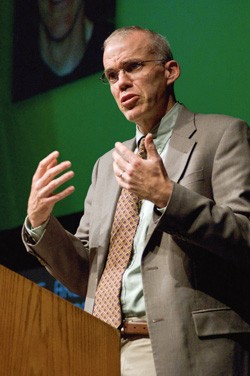 Not too many Distinguished Scholars at Middlebury College get arrested at the White House gates. But that’s what Bill McKibben, who’s also a Harvard grad, intends to do August 20 at the start of a two-week series of civil-disobedience actions that could lead to scores of Vermonters being carted away by the D.C. police.

McKibben is helping to organize this protest against a proposed $7 billion, 1700-mile pipeline that would pump crude oil to Texas refineries from tar sands in Alberta, Canada. As one of more than 1000 activists who have pledged to break the law, McKibben says he feels compelled to make a radical move because the effects of climate change are becoming so grave. NASA scientist James Hansen recently warned that tapping Canada’s vast oil sands would stoke the atmosphere’s carbon overload to the point where “it’s game over” for planet Earth.

Nearly a year ago, Secretary of State Hillary Clinton went on record saying she’s “inclined” to let the oil flow. Given the Obama administration’s mixed record on environmental issues, McKibben isn’t convinced the president will have a different view. A decision is expected within the next three months.

“The insane flooding we saw this spring in Vermont,” McKibben remarks, is a symptom of the one-degree rise in average global temperature that’s already been brought about by burning oil and coal. Most climate scientists agree that Earth is going to warm by at least another degree even if the output of greenhouse gases is radically reduced. An increase of an additional two or three degrees, which could occur as a result of projects such as the Alberta-Texas pipeline, will render the next century “completely impossible,” as opposed to “merely miserable,” McKibben says.

Despite their sense of urgency, organizers want to make sure the White House arrests take the form of what McKibben calls “very civil disobedience.” Decorum should be maintained, he suggests with a smile, because “it’s too hot to be fighting” in the streets of Washington in August. The goal is “to demonstrate who the real radicals are — the ones who are willing to alter the Earth’s atmosphere,” McKibben continues, his smile receding. “We’re a conservative force by comparison.”

Middlebury College doesn’t appear to object if its brightest faculty star winds up getting busted in Pennsylvania Avenue’s no-go zone — and the incident airs on CNN. In fact, it sounds officially supportive. “Protests have long been a part of the political discourse in American democracy,” says Alison Byerly, the college’s provost. “Middlebury faculty and staff are private citizens as well as employees of the college and pursue a wide range of interests and passions, many of which enrich their interactions with our students.”

McKibben in turn applauds the school that recruited him soon after he relocated to Ripton from the Adirondacks in 2001. “Middlebury had started moving toward having a green campus before I got there,” he notes. The college’s commitment to achieving carbon-neutrality “meant students didn’t have to badger the administration, which freed them to do much more important things,” says the scholar-in-residence in environmental studies.

In the decade he’s been at Middlebury, McKibben has taught two courses. But in 2007, he helped Midd kids launch a movement called Step It Up that instigated climate demonstrations across the United States. Step It Up also spawned 350.org, the catalyzing agent for today’s global campaign to prevent atmospheric carbon content from reaching catastrophic levels.

All this has flowed from The End of Nature, McKibben’s prophetic book about global warming. Published in 1989, the best seller changed the thinking — and the lives — of some of its readers, among them Vermont actress Kathryn Blume. “That was where my awareness began,” she says by way of explaining why she also plans to get arrested at the White House. Blume says she’ll use the book as the basis for her next one-woman play — her second about becoming an activist.

McKibben’s charisma, scholarship and relentless roadwork have proved inspirational far beyond Vermont. Offsetting whatever frustration he may feel, McKibben says, is the satisfaction he’s gained from collaborating with activists “in the poorest parts of the world,” including — to name a few he’s recently visited — India, China, the Maldives, Mexico, Lebanon, Ethiopia, Bangladesh and Oman.

Rock-star status notwithstanding, hop-scotching the globe does get wearying, confesses McKibben, 50, over a lunch-time plate of chicken curry at Taste of India restaurant on Bakery Lane in Middlebury. Balding and almost gaunt, he laments, “There have been stretches where I’ve been home only 50 or 60 days a year. I’ve hated that because I do love it here.”

When he travels, McKibben usually leaves behind his wife, author Sue Halpern, who is also a Middlebury College scholar-in-residence, and their teenage daughter, Sophie. He says he misses them both, along with Vermont’s political culture and natural beauty, adding that he’s proud to live in a place recognized in China and other countries as a world leader in environmental awareness.

Does the state deserve its green reputation? Shutting down Vermont Yankee, according to McKibben, was “the easiest case there ever was to make.” Noting it took a “30-foot wall of water” to damage the Fukushima nuclear plant in Japan, McKibben recalls that the side of a cooling tower at Yankee “just fell off” a few years ago. Entergy, the owner of the Vernon plant, “shouldn’t be allowed to run even a chain of convenience stores,” McKibben charges.

The trend in energy generation, he observes, is “away from few and big and toward many and small.” He’s all for wind power, for example, despite the opposition of some Vermont greens to ridgeline installations. “Every kind of energy has drawbacks,” McKibben acknowledges. “In general, the benefit of the doubt belongs to renewable energy.”

He says he’d welcome wind turbines in his own backyard — or at least up the road at the Middlebury Snow Bowl. “There’s something to be said for dealing with the drawbacks closer to where the energy is being consumed,” McKibben suggests. Right now, though, he notes, the drawbacks of fossil-fuel power plants are felt most acutely in places like West Virginia, where mountains are being blown apart to expose their coal deposits, and low-lying, densely populated Bangladesh, which is starting to sink like Atlantis as the ice caps melt.

In McKibben’s view, the “planetary emergency,” as Al Gore calls it, still doesn’t justify partnering with a company such as Lockheed Martin on climate-control initiatives, as Burlington Mayor Bob Kiss has proposed. “There’s enough local talent to do what needs to be done” in Burlington, McKibben maintains. He goes easy on Kiss, though, insisting the mayor’s willingness to work with a warplanes manufacturer doesn’t make him “a warmonger.”

Lockheed’s expertise can supplement the talent that Burlington does possess, Kiss says in response. But the politically beleaguered mayor doesn’t sound eager to battle a segment of the Progressive base for the sake of salvaging the Lockheed deal. The company was “looking at this relationship as a way to build a positive effort,” Kiss says. “They don’t want to add to controversy.” So, while conversations between the city and Lockheed are continuing, “there’s no timetable” for taking action, the mayor reports.

Local actions of any sort could be negated by what’s happening on the planetary level, McKibben warns: Think locally, act globally, in other words. “We could replicate Hardwick and the Intervale all across Vermont,” he says, “but if it rains every day for 30 days, or if it never rains, you won’t be able to grow any food.”

That’s what keeps Joe Solomon, a 350.org staffer, in the fight. Referring to the likely impact of the Alberta-Texas pipeline, Solomon notes that “all that extra carbon is what burns up Vermont’s summers, melts away our ski seasons, unravels our farms and will keep breaking unprecedented floods upon us. We have a hell of a lot of self-interest to stop this thing.”

The current political and economic situation could not be less conducive to McKibben’s mission. But waiting for things to improve is not an option, either. “This isn’t a problem like other problems,” McKibben warns. “We can’t come back to it in 10 years when the politics may be better.”

What’s more, “there’s no guarantee we’re going to win,” McKibben points out. In that crucial respect, the climate movement differs from one of its activist antecedents. “People in the civil-rights movement had to be braver because they could be shot at,” McKibben reflects, "but they had the great advantage of knowing they were going to win."

What Are Those Stone Caves in Many Vermont Cemeteries?
Top Stories