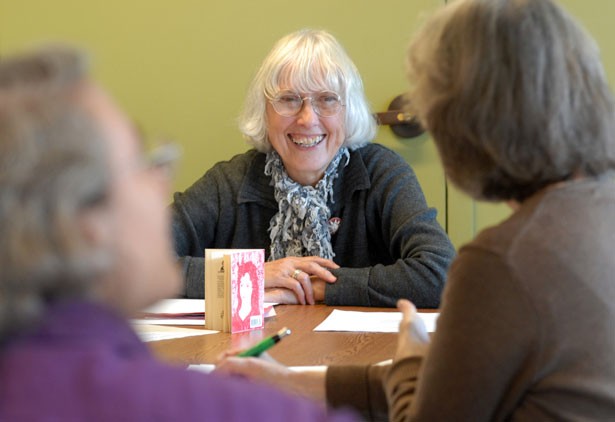 It is "a truth universally acknowledged" that one of the English language's wittiest novelists still has a tremendous following, even 190 years after her death. Witness the Jane Austen Society of North America. Based on the original British organization, the 60 JASNA chapters around the U.S. and Canada meet regularly to adore the 19th-century author's sentences, learn the latest from invited scholars, or simply socialize over English tea. Vermont now has its own chapter, thanks to Austen enthusiasts - and JASNA members - Carol Madden of Montpelier and Kelly McDonald of Winooski.

About eight women, including Madden's daughter and McDonald's mother, attended the inaugural meeting last Saturday at the Kellogg-Hubbard Library in Montpelier. McDonald had emailed the other 12 JASNA members living in Vermont; though only one could make it, nearly all, she reported, were happy to hear that they will no longer need to travel to Montréal or Boston for meetings. Madden had become disenchanted with the Boston meetings, anyway: They served bad food, she claims. "I mean, what's this with hummus and crudités?" she says with a chuckle. "I should think they'd want nice tea and cucumber sandwiches."

JASNA requires chapter members to pay a $30 annual fee. Chapters usually mandate additional dues for their own expenses - a measure this newly formed group immediately voted against. It's safe to say that JASNA-VT will buck the trend in other ways, too. In some chapters, members don period dress; these Vermonters laughed outright at the idea of wearing pelisses and frock coats to gatherings.

The local organizers, too, are not overly P.C. about their heroine. Their poster for Saturday's event superimposed Austen's curl-festooned head on the big-shouldered Uncle Sam of the famous army-recruitment image. The group decided to mix up meeting locations to include Brattleboro, where one member lives, and East Hardwick, home of the English-style tea room Perennial Pleasures.

After the women settled the pressing matter of how to celebrate Jane Austen's birthday on December 16 - they agreed to share favorite passages over tea at a Montpelier member's house - McDonald drew names for door prizes. She had bought the boxes of authentic English tea and biscuits during her summer trip to Winchester, England.

McDonald, who only recently started reading Austen's six novels, discovered the author via historical research on an 1814 diary written by one of Austen's acquaintances. Madden is simply a fan of the books: "I just love Jane Austen," she enthuses. "We're just out to have a fun time." Anyone can join the chapter - all that's required is the ability to read aloud the social satire of, say, Northanger Abbey, without dissolving in laughter.