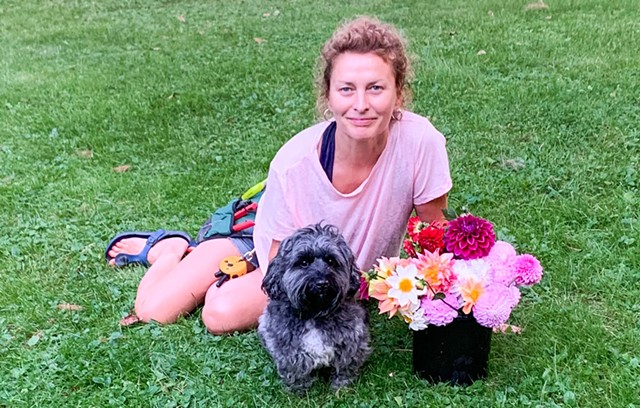 Most people do everything they can to keep rabbits out of their gardens. "I'm the only person I know who put a bunny in their garden," Audrey Bernstein said with an expressive shrug during a conversation at her Poker Hill Flower Farm in Underhill.

The accomplished singer and voice coach is also probably the only person to have named her inaugural jazz album in tribute to a beloved pet rabbit, and then started a backyard flower farm in the late bunny's honor.

Bernstein, 56, brings a distinctive and eclectic background to the community-supported flower business she launched last year.

Her mixed bouquets reflect her: soft swoops of beauty with the odd, intriguing spike. Combinations in shades of her favorite pinks, salmons and peaches might include snapdragons, zinnias, scabiosa, strawflowers, China asters, coreopsis and blossoming dill. They are often charmingly off-kilter.

"I like stuff a little bit askew," Bernstein said.

Whatever she does, she dives in "with everything: hands, feet, face," Bernstein said.

Before she had turned 30, Bernstein had appeared semi-clad on a 1987 Sonic Youth album cover, kicked heroin while shoveling snow in Stowe, ascended from snowboard novice to the female top 10 worldwide, and enlisted high-profile music pals such as Moby to DJ a New York City party series.

The Maryland native first moved to Vermont in 1987. "I was addicted to hard-core drugs in NYC but living a fairly glamorous and very interesting life," she confided, pulling her Terripoo, Marty, onto her lap. Vermont saved her, Bernstein said, as did the intensity of devoting herself to snowboarding.

About 20 years later, she was living in Los Angeles when she sunk to another nadir. She had built a successful event-planning business, started a popular cupcake bakery and inked a book deal, and she was poised to launch a lifestyle website. But then two back surgeries and the recession flattened her.

"My mother suggested I move back to Vermont," Bernstein said.

A self-described "crazy animal person," she had two cats and a white rabbit at the time. Despite everything going on in her life, a friend insisted she adopt another rabbit, Blue, who had recently been rescued from the jaws of a dog. "I saved his life, and he saved my life," Bernstein said simply.

She had always gardened, Bernstein said — on NYC fire escapes and in her Los Angeles backyard. "I love seeing the bizarre, tiny seeds grow," she said. "It's so miraculous."

In 2009, when she landed in Stowe again, she signed up for a community garden plot. "I just grew everything for Blue," she said, noting that cilantro, basil and dill were the little black bunny's favorites. "He'd be in [the garden] with me. I'd bring him little salads. It was our happy place."

When Blue died in 2016, Bernstein was devastated. "I was not sure I wanted to garden without him," she admitted. "But I thought, Maybe I'll plant some flowers for him."

Her then-boyfriend, jazz guitarist Joe Capps, took her on a nursery shopping trip to cheer her up. Their Underhill rental offered plenty of space for gardens. The following summer, Bernstein started selling mason jars full of blooms at the top of their driveway.

The couple got married under a backyard apple tree in 2018. Researching designs for her homegrown wedding flowers, Bernstein discovered Floret Flowers, a Washington State farm and seed company that has inspired a new generation of farmer-florists.

Through Floret and others in the floral field, Bernstein has expanded the flowers she grows, from early season tulips to ranunculus, Icelandic poppies and anemones to sweet peas and stately delphiniums. She's fallen for dahlias: the salmon fireworks of the Labyrinth variety, fuzzy-hearted platinum blond anemone dahlias and the impressionist brushstroked Papageno.

And if you dismiss mums as commonplace, Bernstein promised that spider chrysanthemums, with their sculptural arrays of petals, will change your mind.

"I love all the shapes and the beauty," Bernstein said. "I love seeing people light up when they see the arrangements." She also loves taking photos of her flowers in her collection of antique vases to post on Instagram.

In 2019, Bernstein started selling bouquets through seasonal CSA subscriptions, which customers pick up weekly at Burlington's Tomgirl Kitchen or Stowe's In Company. Prices range from $45 for a three-week petite tulip share to $320 for a 14-week mixed-bouquet summer share.

Gabrielle Kammerer, founder and CEO of Tomgirl, has nothing but praise for Bernstein's bouquets. "Audrey's sparkling and engaging personality comes through in the quality of her colorful and bountiful flowers. I'm always thrilled to see what new blossoms have come to life in her garden," she wrote in an email. "From one female entrepreneur to another, I am cheering her on, and very excited to see her passion for flowers come to life in the form of a local business we can support!"

That business itself is flowering. This year, Bernstein has tripled her garden space to about an eighth of an acre and doubled the number of shares to 20 at each location and five more in Underhill. And she still sells bouquets in jars at the end of the driveway for $15 to $25, paid via the honor system.

Bernstein laments that the flowers have crowded out the chairs on which she and her husband used to enjoy a glass of rosé with cheese and crackers at the end of the day — though there's still room beyond the garden fence.

"I love being in my garden, just being in there with the bees and the hummingbirds," she said. "The flowers are great, but this," Bernstein emphasized, gesturing to her little dog happily exploring between rows of plants, "is why I garden."