Attorney Richard Saudek Can't Stop Wind Developers, but He Can Make Them Pay 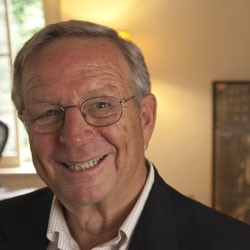 Ten months ago, the blades started turning at a 16-turbine wind farm in the hills above Sheffield. The Northeast Kingdom town of 700 people has since been collecting generous quarterly payments from the wind farm’s Boston-based developer totaling $520,000 per year — enough to virtually eliminate property taxes for residents and build up a hefty rainy-day fund.

Twenty-five miles away, the town of Lowell is set to collect even more money — $535,000 annually — from Green Mountain Power when the utility’s 21-turbine Kingdom Community Wind project is up and running. At town meeting next March, Lowell voters will decide how to spend their community cash, which is set to increase by $32,500 every five years.

The town of Searsburg will get $240,000 annually from Iberdrola Renewables for its wind farm, while the same developer will pay neighboring Readsboro a minimum of $154,000 a year for the 15-turbine Deerfield Wind farm.

The man responsible for those windfall sums is Richard Saudek, a Montpelier-based attorney who negotiates contracts with wind developments on behalf of Vermont towns. A former state regulator who is now in private practice, Saudek has carved out a niche as the go-to lawyer for towns in which big energy companies want to build large wind farms. He’s created the blueprint for talks playing out all over the state.

Some view Saudek as a protector who helps win fair compensation for towns that could otherwise get steamrolled by big wind developers. Others believe he’s helping to sell out Vermont towns who might oppose ridgeline wind power projects if not for the lucrative payouts.

“Had there not been any bribe money in the town of Lowell, this would have not gone through,” says Kevin McGrath, whose land abuts the wind site. “This is what happens when corporate America comes to a sleepy little town and dangles the carrot.”

Saudek laughs at the suggestion that his deals are Faustian.

“Ya think?” he says, before adding more seriously, “It’s a lot of money, and a judgment is made balancing whatever negative factors there are ... against the income that they bring in.”

Saudek is uniquely positioned to broker these arrangements, having worked on almost every side of the utility industry: as chairman of the Public Service Board in the 1970s; as the first commissioner of the Department of Public Service; as author of the state’s first contract with Hydro-Québec; even as president of Hydro-Québec’s U.S. subsidiary.

Today, the 72-year-old is a partner in Cheney, Saudek & Grayck. The Montpelier firm is tucked into a 200-year-old State Street house that 19th-century governor Fletcher Proctor once eyed as a possible governor’s mansion. Stacks of papers cover his desk, and his bookshelves are an odd mix of legal tomes and whimsy, including a book about Circus Smirkus and a framed pencil drawing of the Mad Hatter signed by Walt Disney.

Saudek uses the word “checkered” to describe his own career in energy and utility law. He was appointed to the PSB by former governor Richard Snelling and served as its chairman from 1977 to 1981 — the early days of Vermont Yankee. The nuclear plant, which came online in 1972, was plagued by start-up problems and output issues. Meanwhile, the state’s contract for cheap power from New York State generating stations was about to expire.

It was in this energy environment that Vermont struck its first deal with Hydro-Québec, which had a surplus of power to sell as a result of huge hydro projects going online in the north of the province. Vermont was looking to buy.

Lawmakers in 1981 created the Department of Public Service — which is distinct from the politically neutral PSB — and Snelling named Saudek as its first commissioner. His first big job: negotiating a power agreement with Hydro Québec.

“It was a good contract,” says Saudek, though he admits some Vermonters objected to the damming of rivers in northern Québec that flooded the ancestral grounds and villages of some indigenous people.

Saudek’s stint in public service was a mix of policy and politics. As Snelling’s public service commissioner, Saudek — a self-identified Democrat working for a Republican governor — found himself carrying out nuclear policies he didn’t support, a situation he recalls as “uncomfortable.”

But that was inevitable, Saudek says: Strong governors tend to direct the public service department.

The PSB is another matter. “I think it’s a tribute to the various people on the board over the years that the PSB has tried to divorce itself from the politics of the moment,” Saudek says.

Not that the PSB hasn’t taken some politically unpopular stands. The PSB has provoked the ire of wind-power opponents — but Saudek says that these opponents “don’t take into account that the legislature has dictated an awful lot of this.”

Saudek entered the wind debate eight years ago, when the town of Sheffield hired him to negotiate a contract with First Wind. At that time, the public furor over wind power — evidenced this week by another round of protests at the Lowell construction site — hadn’t kicked into high gear.

Saudek himself was initially skeptical about wind development in Vermont; he says he believed 400-foot turbines were too large for the state’s landscape. But after signing on as Sheffield’s attorney, he made several trips to wind farms in nearby states. He found the turbines weren’t as offensive as he expected.

“I didn’t have the kind of personal, visceral reaction that some people do,” he says.

So he found another angle. “I saw my purpose in part ... in telling people what the effect is likely to be of these machines. I basically said, ‘Your town is never going to be the same.’”

Saudek warned town leaders in Sheffield that the upcoming construction would be like nothing they had ever seen. Unimproved dirt roads would need to be widened and shored up to support the heavy trucks hauling turbine parts up the mountain. Emergency personnel would need special training to deal with fires and other potential accidents at the wind farm. All that costs money — expenses Saudek argued that First Wind should pay.

Saudek brings one especially crucial skill to negotiations: He knows enough about utilities to estimate the annual revenues of its various projects and makes his demands accordingly.

This past March, Saudek attended a town meeting at which Sheffield voters decided how to allocate their windfall earnings from the First Wind development. He snapped photos on his digital camera, out of place in his suit and polished shoes, and stepped forward only when called upon to answer questions about Sheffield’s contract with the developer.

Bottom line: The first half of First Wind’s payment cut municipal taxes in the town by roughly 80 percent. The rest is going into a savings account.

“He’s certainly knowledgeable, and he understands the energy world from many perspectives,” says Steve Terry, a vice president with Green Mountain Power who helped broker the Lowell payments.

Terry has known Saudek since the 1970s, and describes him as the kind of person who “gets his phone calls answered. That’s half the game.”

“He has his own style: a little bit of bluff and bluster,” Terry says. “But that’s the way he’s been for all the years I’ve known him. It’s all part of the package.”

Officials in the towns Saudek has represented speak highly of the lawyer. The complicated legal quandry surrounding wind developments is “just beyond some of these towns. You need legal expertise,” says Karen Jenne, a selectboard member in Derby, where Saudek stepped in to advise the town before plans for two turbines fell through. “You need an expert. You need legal advice right up front. Mr. Saudek served us well.”

As for Saudek’s negotiations with GMP in Lowell, Terry remarks, “It took a while, but it was done with good spirit, and it was fair to both sides.” He characterizes those negotiations, and the eventual agreement, as one of the “foundation stones” that led three-quarters of Lowell voters to support the project in a 2010 town meeting vote.

Of course, “fair” is in the eye of the beholder. Some wind opponents have questioned why only host towns receive Saudek-brokered financial compensation, when neighboring villages often have to look at, and hear, the turbines churning, too. That’s because those payments are largely in the form of property taxes, intended for the town in which the property is located.

In the case of Lowell, GMP is setting up a “Good Neighbor Fund” for surrounding towns. Annual payments, ranging from $10,000 to $60,000, will be calcuated based on what percentage of the town is located within five miles of the turbines.

That isn’t enough for wind opponent Annette Smith of Vermonters for a Clean Environment. She describes Saudek as “no friend of the public,” saying that closed-door negotiations with selectboards and developers only help the “selectboard members who are so eager to sell our state heritage for money.”

While he will continue to play a vital role in those transactions, Saudek is in no rush to entertain more wind proposals. Looking ahead, he predicts that Vermont “may want to take a deep breath” after the current crop of wind farms goes online. “It’s hard to know how we’ll look back on wind in 20 years,” he says.

UPDATE: An earlier version of this story did explain that payments to towns are made up in part by property taxes. In negotiating an annual figure with towns, the wind projects agree to pay at least a certain amount annually, and will pay the difference if property taxes are assessed at a lower rate.