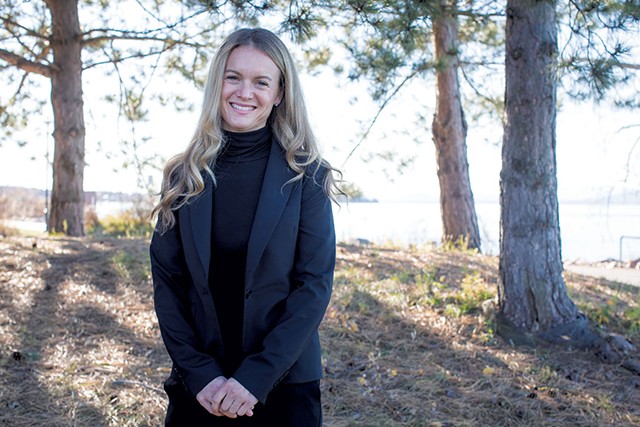 When Fletcher Joestar of Stowe left her job in March 2020, she expected to start a new one three days later as a production coordinator for musician James Taylor. Then the entire tour was postponed due to the pandemic, leaving Joestar out of a job for the foreseeable future.

Because her employment in the music industry is seasonal, Joestar typically files for unemployment in all the states where she works, something she disclosed to the Vermont Department of Labor. However, because the department didn't take that fact into consideration when Joestar filed for an extension of her benefits, it notified her in December 2020 that she owed the state more than $5,000 in overpayments.

"Needless to say, I didn't have another source of income at the time, so I had already spent that money on bills and rent and whatnot," said Joestar, whose partner was also out of work because of COVID-19. "So that put me in a real predicament."

Joestar couldn't afford to hire a private lawyer to help her navigate the labyrinthine unemployment systems of multiple states. So she turned to Vermont Legal Aid. It assigned her case to Burlington-based attorney Emily Kenyon, who helped Joestar compile her evidence and build a case to present to a judge in July 2021.

"A day before the hearing, the judge realized that it was kind of ridiculous that it had gone this far ... when clearly none of this was my fault," said Joestar, whose appeal ultimately was successful. "Emily was really wonderful. I don't think I would have been in such a position right now if it wasn't for her helping me."

With her impeccable legal credentials, Kenyon could land a prestigious position at any law firm in the country. But rather than seek a job with a high-powered firm in New York City or Washington, D.C., the 33-year-old accepted a two-year position as the poverty law fellow with Vermont Legal Aid.

The nonprofit law firm founded the fellowship with the Vermont Bar Foundation in 2008 to address the unmet legal needs of low-income Vermonters. Since then, the program has drawn impressive legal talent to Vermont's public-interest law firms.

Kenyon is the program's seventh poverty law fellow and its first from the Green Mountains. An eighth-generation Vermonter, she grew up on a farm in Monkton. Her family, which owns Nitty Gritty Grain in Charlotte, has been working the land in the Champlain Valley since the 1770s.

"Public-interest attorneys provide a voice to people who might otherwise not have one," Kenyon said in a recent interview.

Growing up in Vermont, she said, she saw that poverty was a common condition of rural life, and she decided early in her career that she wanted to handle cases for low-income clients.

While in law school, she worked for multiple public-interest organizations, including the Sylvia Rivera Law Project, which helps people who are transgender, intersex or gender nonconforming; Sanctuary for Families, which aids victims of domestic violence and sex trafficking; and Earthjustice and the Natural Resources Defense Council, both of which work in environmental advocacy and law.

"I've always known I wanted to have a career helping people in some way." Emily Kenyon tweet this

After law school, Kenyon clerked for federal judges in the Southern District of New York and the U.S. Court of Appeals for the Second Circuit. She always hoped to return to Vermont, she said, but she didn't think it would happen anytime soon — until she read about the poverty law fellowship.

"Emily's academic record and scholarship definitely impressed the committee, but it was her demonstrated commitment to public service and legal issues affecting the underserved/unrepresented that really made her stand out from her peers," Burlington attorney Renee Mobbs wrote by email. "She has a long record of service, [especially] for someone so young. She is passionate, eloquent and articulate, and a staunch advocate for her clients to boot!"

While not well known outside of legal circles, Vermont's poverty law fellowship attracts as many as 90 applicants annually, including many from Ivy League law schools.

According to Eric Avildsen, executive director of Vermont Legal Aid and a member of the fellowship selection committee, all previous poverty law fellows left indelible marks on the state, often by effecting new legislation or creating important programs and policy changes. All but one have stayed in Vermont to continue their legal careers.

Poverty law fellows don't choose their areas of focus; the nonprofit assigns them based on underserved needs. Vermont's first poverty law fellow, Grace Pazdan, who served from 2008 to 2010, focused on the foreclosure crisis. She filed predatory lending suits on behalf of dozens of homeowners harmed by unscrupulous lenders and mortgage providers. Pazdan is now a staff attorney at Vermont Legal Aid.

Jay Diaz, who served as poverty law fellow from 2012 to 2014, worked on the achievement gap in public education that results from race, poverty and disabilities. His January 2015 white paper, "Kicked Out! Unfair and Unequal Student Discipline in Vermont's Public Schools," revealed that Black and Native American students were two to three times more likely to get suspended and expelled from school than other students. The same was true of students with disabilities. Those findings led to statewide reforms of school disciplinary practices and data gathering. Diaz is currently a staff attorney with the American Civil Liberties Union of Vermont.

"Often, we've had to change what we were doing in response to something that came up during the fellowship," Avildsen said.

Jessica Radbord was Vermont's poverty law fellow when Tropical Storm Irene hit in 2011. Because of her experience earlier that year working with the Federal Emergency Management Agency to help residents of a flooded trailer park in Barre, Radbord immediately starting taking Irene-related cases.

"Within two days we had FEMA sending people to her," Avildsen said. "It worked out great."

Kenyon's fellowship, which began in October 2020, focuses on addressing another crisis that disproportionately affects low-income Vermonters. This one, however, is in a domain the nonprofit doesn't normally handle: employment.

As the number of Vermonters filing for unemployment benefits jumped from about 8,400 in January 2020 to more than 52,000 in April 2020, according to the U.S. Bureau of Labor Statistics, the nonprofit law firm was inundated with requests for help.

"Legal Aid went from getting five unemployment calls a month on our hotline to more than a hundred," Avildsen said. "There was a huge explosion of people calling us the month after the pandemic started, and that's continued now for 18 months."

Early on, Kenyon said, she was shocked by the depth of the problems with Vermont's unemployment system and how easily laid-off workers can be disqualified from receiving benefits to which they're legally entitled.

Workers leave their employment for all kinds of reasons. Kenyon has represented clients who quit or got fired from their jobs because of COVID-19. Some were at heightened risk from the virus and no longer felt safe; others had to stay home with young children because their schools or daycare centers were closed.

Vermont Legal Aid is usually successful in its appeals, Kenyon said. But the process can be complicated and time-consuming.

Although the Department of Labor is supposed to hear appeals within 30 days, many cases drag on for six months or longer due to the enormous backlog. Joestar's appeal took eight months, during which she had no other income. As Kenyon put it, "The whole purpose of the unemployment system is to be a quick replacement of wages to get you on your feet and back to work."

Particularly stressful are the cases in which the state tells low-wage workers that they owe tens of thousands of dollars. The biggest overpayment that Kenyon has seen, in a case handled by a colleague, was in excess of $35,000.

"That's terrifying," Kenyon said, "and our legal system isn't designed to be navigable by non-attorneys, at least not easily. It's riddled with procedural rules and technicalities that are hard to understand from the outside."

Kenyon doesn't necessarily see the Department of Labor as the problem. She's interacted with many employees there, she said, who care about their work and are doing their best. But they've had to handle a flood of cases and new federal mandates since the pandemic began.

"I think it says that we need to invest in our unemployment system to modernize it," she said. "They have a really outdated computer system, and apparently it's a source of a lot of the problems." As Seven Days reported in October, problems with the Department of Labor’s 1970s-era mainframe computer system prompted a $30 million overhaul

As Kenyon enters the second year of her fellowship, her focus will shift. In year two, all poverty law fellows address a larger systemic issue, sometimes by working with the legislature and other state officials.

For instance, Mairead O'Reilly, the poverty law fellow from 2016 to 2018, spent several months testifying before the Senate Judiciary Committee to change Vermont's expungement law for people convicted of crimes related to opioid-use disorder. O'Reilly, who's now a Vermont Legal Aid attorney, set up expungement clinics in every county in the state, Avildsen said.

Though Avildsen wouldn't specify which project Kenyon will take on, it will be related to her work on unemployment, perhaps addressing the challenges faced by formerly incarcerated Vermonters as they seek jobs.

"I've always known I wanted to have a career helping people in some way," said Kenyon, who's already helped more than 90 clients in the last year. "To me, the meaning of life is to improve the world in some way and make people's lives a little bit better if you can."