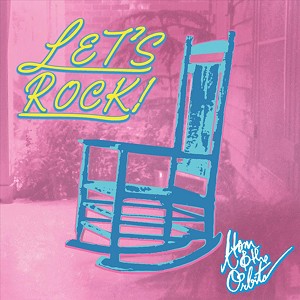 When someone tells me that they wish to "rock," I can't help but flashback to the video for Twisted Sister's "I Wanna Rock." You know, the one with the dickhead from Animal House demanding, "What do you want to do with your life?" And if someone literally says "Let's rock" to me, my brain translates it into Brian Johnson from AC/DC saying the words. I honestly recommend that for everyone.

It turns out singer-songwriter and guitarist Noah Hahn is exploring a different era of rock with his Atom & the Orbits project. The band's debut record, Let's Rock!, bops along as if the Cold War were just getting going and radio were king. The album might be 100 percent genre worship, but Hahn and his band bob and weave through the era of sock hops and hair grease and broken elevators of love. The collection is faithfully produced, from dance-floor rockers to Creole-influenced swamp pop.

Fittingly, the record kicks off with "Let's Rock." Hahn, bassist Jacob Silver and drummer/producer Robin Macmillan lock into a nitty-gritty jam that wouldn't be out of place in a sweaty dive bar. It's easy to picture a dance floor full of teenagers losing their pre-Vietnam War shit over something so raw. (I'm picturing some of them wearing 3D glasses, because apparently everything I know about the '50s I learned from Back to the Future.)

With triumphant horns and Macmillan's propulsive drumming, "Get Your Boogie On" jumps out of the speakers like Hahn just invented garage rock. Anaïs Mitchell, the Tony Award-winning creator of Hadestown and Hahn's wife since 2006, provides silky backup vocals along with Lake Street Dive's Bridget Kearney.

Speaking of special guests, Atom & the Orbits boast quite a lineup. Blake Miller, of Cajun rockers the Revelers, lays down the fiddle and accordion on "Louisiana Blues." Fiddler Rosie Newton lends Americana authenticity to "Come Back to Me" with soaring harmony vocals and by trading licks with pedal steel guitarist Asa Brosius (Western Terrestrials).

Despite all that big-name talent, none of the musicians overshadows the character of Let's Rock! They've all bought in to make an energetic and heartfelt record. One listen to the aforementioned "Broken Elevator of Love," with Hahn's best Elvis Presley impression over a Chuck Berry shuffle, and there is no doubting Atom & the Orbits' bona fides.

Let's Rock! is available on all streaming sites, as well as at atomandtheorbits.com. The band plays on Saturday, August 21, at the Foolaroo festival in Middlebury.