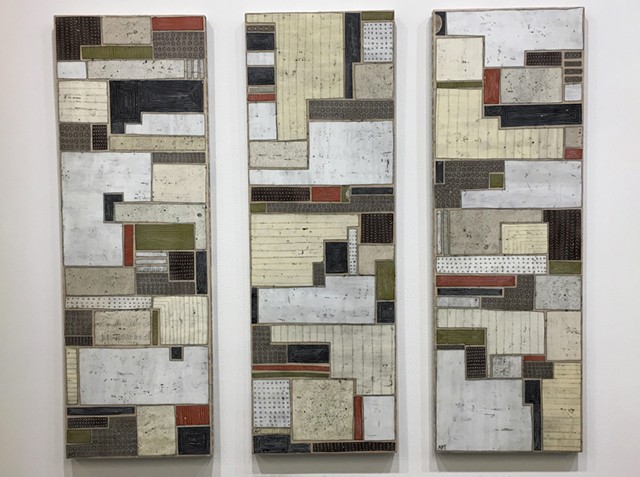 Sometimes an art show just doesn't grab you; one quick glance, and you walk on by. Other times, the work reaches out and gently but firmly pulls you in. Athena Petra Tasiopoulos' mixed-media collages are in the latter camp. Her exhibition "Inner Spaces," on view at Soapbox Arts in Burlington, is filled with abstract compositions that enticed this viewer to stay and look for a good long while.

In previous work, Tasiopoulos employed 19th-century "cabinet card" portraits and delicate textiles to produce compositions with a feminine, vintage sensibility and faded hues. It was a style entirely her own.

"Inner Spaces" maintains visual consistency with that earlier work in vocabulary, palette and concept. But, though the new works are recognizably hers, they are more dynamic, with strong angularity and assertive mark making. And Tasiopoulos has, for now, traded figurative elements for geometry.

She has also branched out into three dimensions, interspersing her 2D wall pieces with 4-by-4-inch totem-like columns of wood, most with additional tiny wood blocks attached randomly to the sides.

Tasiopoulos originally trained in photography, and the nearly abstract images on her website presage the work she's now creating in other mediums.

She begins her collages with myriad geometric shapes, piecing together cutout recycled or vintage paper such as sheet music, then proceeds with paint, a coat of encaustic and marks incised with pottery tools. Though most of the shapes are rectilinear, there are no perfectly straight lines; the artist's hand is evident everywhere.

While many of her pieces appear quite similar, each is in fact a distinct architectonic variation. Part of the appeal for a viewer lies in observing all the ways Tasiopoulos imagines the arrangement of space.

In a phone conversation, the artist talked about her process, the seduction of the old and pushing toward the new.

I have to ask about your awesome name — three Greek words, one of them a goddess. I take it your family is Greek or of Greek descent?

I know you're from Pennsylvania, but is that heritage significant to you?

Definitely. One parent is an immigrant; the other [side] has been in the States a long time. I'm an only child, and I've always been a little introverted. You tend to feel you don't belong in either world. You feel like you're floating in between. I think that translates in my work, [that] I'm trying to replicate a sense of being present, of just what is.

I'm also influenced by old things. In Greece, you feel like you're so small; you're just seeing these old marble walkways and thinking about how many people have walked there. It's humbling.

Over the years that I've seen your work, some aspects have evolved and some, such as your general palette, have held steady. How do you see the evolution in your art?

I feel like any time you try something different, you think, Oh no — it's a little scary. But as I progressed into more abstract mixed-media work ... I had this weird fear of letting go of photography. But using the antique photographs helped. It was a bridge. Then one day I said, "Let me just not use the photographic image at all."

Have you moved on from using the cabinet-card photos, then?

I never want to say definitely, but I'm probably not going to be working with them in the near future. I'm ready to explore different avenues.

In the past, you've exhibited textile-based work, but that's absent from the current show, too.

I have all of that [material], as well. I really explored textile work when I was in residency at Studio Place Arts [in 2016-17]. I love delicate line work, and the marks I make [on the encaustic] resemble sewing and stitching. Right now, I'm just enjoying the collage work.

On your website, you state that you "gravitate toward soft, muted colors." Can you talk about your attraction to the gentler end of the color spectrum?

There are a few reasons: I do use a lot of old, found material — book pages, photos, sheet music — and they just naturally have an old, stained quality. And I love the warmth. I didn't realize this at first, but I think [the colors] do remind me of the old smooth marble surfaces [in Greece] ... And I like the quietness — you want to go and just be with it.

In the current exhibit, you introduce, in small doses, a bit of dark orange-red. You also incorporate more charcoal or black. Did this feel like a daring deviation to you? Does it indicate a new direction?

Honestly, I don't know if the timeline matches up, but the heaviness in the world the last few years — I felt like I was carrying this dark, heavy pit in my stomach. I feel like, aesthetically, [the darker shades] create good accents. But emotionally, it felt like these little windows or portals into the night sky where you could escape.

I'm by no means a landscape painter, but I definitely love the desert, so there's some orange and brown in some pieces. Some have blue tones, which remind me of water. It makes me wish I could go to these places.

Nearly all of the work could be described as sort of patchwork collages of geometric shapes, but of course every piece is different. Most of the shapes are rectilinear, but you also introduce circles and half-moons. How do these variations come about for you? Do you start with sketches before you commit, or just let your hand go intuitively, as it were?

I'm really intuitive. Sometimes I set off with a random shape that I cut out. I never completely plan; I lay pieces down, take photos, decide what feels right, what feels musical. I think that's seeping into my subconscious — I'm not a musician, but I've been working with a lot of old sheet music, so I like to feel there's a flow. There's a lot of trial and error.

Absolutely. Sometimes I'll use pieces left over from a previous collage. The half-moon shape — I love that. It's feminine, and it's like a portal or bridge.

It's so intriguing to me that your photographs predominantly feature similar patterning, whether found in nature or the built environment, as well as the pale hues. I guess it could be said you have an eye for this.

When I was taking photos, I was always drawn to the geometric shapes, and the palette — it just finds me. In Philadelphia, one of my favorite things to do was walk around areas where there were a lot of abandoned or demolished buildings. In the half-demolished ones, there were these edges exposed that had all these gorgeous shapes and colors — like these ghostly lives that used to live there. I found them beautiful.

Another new element in your work is the wood columns with little blocks attached in seemingly random places. They're playful and architectural at the same time. How did these constructions come about?

I think it just felt like a natural progression. At first, I attached the blocks to two-dimensional works; then I thought, Why not make them three-dimensional? I don't think of them as sculptures, though, because I don't really change the shapes [of the wood].

Will we see more 3D work from you henceforth?

Definitely. I feel very excited about this new direction.