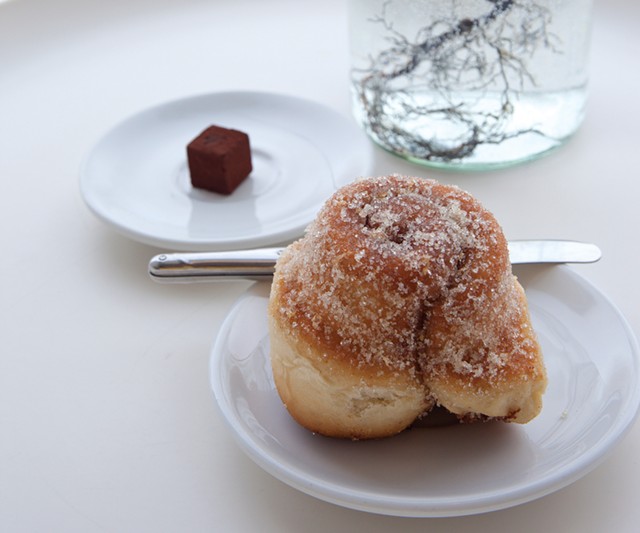 Handmade nougat and canelés fill the display case. The wood-fired oven turns out crusty baguettes. Even the small Vermont city that hosts this unique bakery-café has a Gallic name. The Vergennes Laundry is already so French, there's no need to shout it from the rooftops.

Those who dally long enough — or arrive later — can choose from a wide range of rustic French-style pastries. Plump morning buns are far more intéressant than your standard cinnamon roll. Instead of saccharine frosting, the tender pastry is rolled in sugar crystals and citrus zest.

The gougères would please even a gauloise Goldilocks; neither too crisp nor too mushy, they're just right. And there's a locavore element: Rather than Gruyère or another Alpine cheese, the fluffy choux pastry holds Vermont's Grafton Village Cheese cheddar.

Other Green Mountain ingredients, such as fresh-picked sorrel and celeriac, turn up in daily soups and sandwiches.

The bakery-café is part Europe, part New World, and that also describes the couple who started it all — in a former laundromat — with money they raised on Kickstarter. Baker Julianne Jones came to Vermont to attend Middlebury College and met French expat and now-husband Didier Murat. "Ironically, the Frenchman isn't the baker," Jones told Food & Wine magazine in a glowing story about the place.

But Jones owes at least some of her culinary skills to a three-month apprenticeship with Westford-based French baker Gérard Rubaud — who, like Jones and Murat, proves every day how well Vermont terroir and French recipes go together.