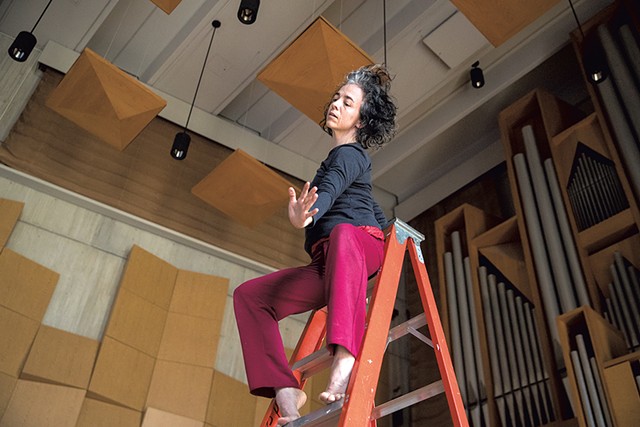 Classical music and improvisational dance are unlikely companions. At classical concerts, patrons listen to meticulously composed pieces played by musicians seated in orderly rows on a stage. Improvisational dance fans witness kinesthetic art created in the moment, bound loosely by a preconceived score and often spilling out into the audience.

This weekend, these strange bedfellows, along with choreographed dances, join forces in a performance to herald the creative power of spring.

"This is going to be a very different experience for the orchestra," says Yutaka Kono, who is the BCO artistic director, UVM director of orchestra and associate professor of music, and conductor of the Vermont Youth Philharmonia. When seeking principal BCO musicians for the concert — which will not require the full orchestra — Kono informed them that the lighting, seating and dress code would diverge from those of typical concerts, and that they might be asked to partake in the dances.

"Some of them were really interested," says Kono, "especially flutist [Berta Frank]. She's going to memorize parts of the music so she doesn't have to be looking at it — so she can participate in some of the choreography."

Although UVM music and dance faculty often collaborate on performances at the recital hall, the venue itself presents unique challenges and opportunities for Besaw and Byrne.

"The recital hall is an amazing space. It's got a lot of character," adds musician, songwriter and senior lecturer Byrne, noting the large windows, beautiful organ and commanding art installations. "Because it's not a traditional dance space, it invites us to play with it and to use the whole hall."

But the greatest adventure for these choreographers is creating new works using music by Claude Debussy and Aaron Copland to which earlier, world-renowned choreographers — Vaslav Nijinsky and Martha Graham — set their own seminal works.

The concert opens with Debussy's "Prelude to the Afternoon of a Faun," a symphonic poem for orchestra that is among his most famous works.

"It is really a monumental piece of music history that's often said to be the dawn of a new era in contemporary or modern music," says Kono.

First performed in 1894, "Faun" employs extended chromaticism — a compositional technique more complex than anything audiences of the day had previously heard. Eleven BCO musicians, clustered on one side of the stage, will play the 11-minute piece, while five professional Vermont dancers perform on the rest of the stage.

In 1912, famed Polish choreographer Nijinsky set a ballet to the Debussy piece, portraying Mallarmé's narrative through ancient Greek imagery. The work is now considered one of the first modern ballets of the 20th century.

"It's iconic because Nijinsky did a tableau to it that's really interesting, beautiful and provocative," explains Besaw, who is choreographing to the Debussy piece. "I need to both accept and avoid the Nijinsky stuff," he adds. "I'm not doing what Nijinsky did, but it's not easy to make something new with this legendary work living in your psyche."

To differentiate his piece from Nijinsky's, and in deference to his own musical sensibility, Besaw is choreographing to the music rather than in response to the faun narrative.

"While Nijinsky was heavily inspired by the exact imagery of the poem," he says, "I've been more interested in celebrating the gorgeous musical structure that Debussy uses."

The other well-known piece in the concert is Copland's Appalachian Spring, for which the composer won the 1945 Pulitzer Prize for Music. Copland was inspired by the American Shaker song "Simple Gifts" by Elder Joseph, which begins with the phrase "'Tis the gift to be simple." Thirteen BCO musicians will play the original 35-minute piece, as opposed to one of the Appalachian Spring suites or hybrids Copland later composed.

Influential American choreographer and dancer Graham commissioned the piece from Copland, requesting a ballet with an American theme and providing him with a scenario to follow. At the 1944 premiere, Graham danced the lead role in the ballet, which depicts the lives of pioneers in a religious community in Pennsylvania. The work is still one of her best known.

Byrne is choreographing the Copland piece — the second time she has done so. In 2010, Byrne and Besaw collaborated with the BCO on a similar dance-and-music performance, which included Appalachian Spring.

"The last time around, I specifically didn't look at Martha's version, because I really was scared of being influenced by it too much," says Byrne.

But, just as Besaw struggles with Nijinsky's legacy, the imprint of Graham's choreography is alive and well in Byrne's mind. Watching a video of her 2010 dance, she found that she had inadvertently included Graham's movements at precisely the same points in the music.

"I had no idea I was doing that," admits Byrne. "It's kind of like a half-filled helium balloon just floating there: Martha's there. Martha is always there."

This time, Byrne is using a different approach. Rather than tightly choreographing the entire piece, she has developed scores for improvisation, designed to highlight what the dancers bring to the performance and to give them more agency in its creation.

An improvisation score is a set of rules within which dancers create on the fly, much the same way two people use language to communicate through speaking and listening. As an example, Byrne cites a simple score by Action Theater pioneer Ruth Zaporah in which paired dancers take turns moving.

"There's almost no choice, and there's absolute choice once the dancer understands the freedoms and the parameters," says Byrne. "It starts to bring up beautiful particularity, which is, of course, the individuality of the performer and the moment and their interaction with each other."

While viewers may assume that improvisation is easy, random or less artistic than choreography, Byrne disagrees.

"It's good improvisation when the absolutely beautiful, right thing is happening at that moment and is absolutely of the moment," she says. "It's not random at all. When I feel like performers are having a real and significant experience through their movement or being still or whatever they're doing, audiences are able to have that empathetic experience, too."

Six professional dancers — five from Vermont and one based in New York City — will move among the 13 BCO musicians, who will be seated in clusters all over the stage. "I'm the wild card," says Byrne. "If I cameo in there, it will be seven."

This concert will mark the first time Kono has conducted in such a setup, wherein the orchestra and dancers entwine onstage.

"I definitely will be inspired by the dancers, seeing a more visual interpretation of the piece," he says. "It's going to be difficult and exciting at the same time."

Sandwiched between the two iconic pieces is Yvonne Desportes' "La naissance d'un papillon pour clarinet seule" ("The Birth of a Butterfly for Solo Clarinet"), featuring clarinetist Steven Klimowski. The work was chosen in part to honor the BCO's March focus on female composers.

"It fits beautifully with the other two pieces," Kono says. "It's a very modern-sounding piece compared to the other two, so it will kind of be like an expansion of Debussy's piece."

Kono notes that the solo performance by Klimowski — and the accompanying solo dance by Byrne — will provide "really different texture. I thought it would make a great contrast."

Byrne's solo "happens on a really tall ladder," the choreographer says. While her movement along the rungs of the ladder could reflect the birth of a butterfly, "It really deals with beginnings and endings, and births and deaths simultaneously," Byrne says.

For Besaw, the inspiration to reprise a collaborative performance of Appalachian Spring with the BCO came from a moment he experienced dancing in the 2010 performance. Near the end of Byrne's piece, he knelt on the edge of the stage for a few minutes, facing away from the audience.

"I closed my eyes and took in this gorgeous piece of music," he recalls. "Having just done a lot of complicated dancing, I could just take in the incredible sensation of the music. I've never forgotten that moment."

For this weekend's Appalachian Spring, in which Besaw will again dance, he says, "I keep asking Clare if I can just kneel on the stage for a few minutes."

The original print version of this article was headlined "Masterful Mix"