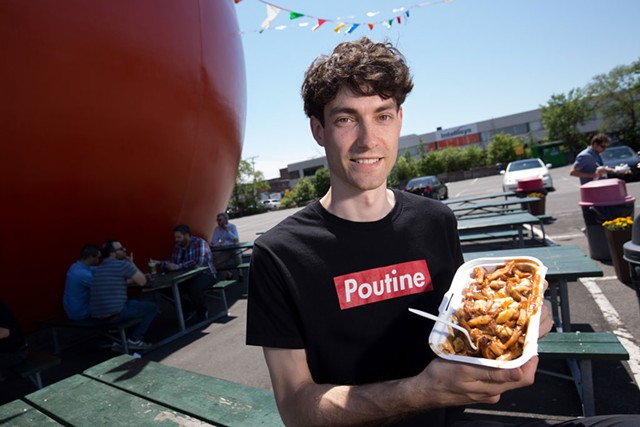 If you've ever been out late at night in Montréal, you've probably plunged a fork into a plate of crispy French fries dappled with squeaky curds and smothered in silken brown gravy. Some of the curds may have melted enough to twirl around your fork. Maybe they were laced with pulled pork or hunks of brisket or some other savory addition, like plates you'll find at restaurants in Burlington — or in Boston, New York City, Detroit or Denver.

At this point, poutine — a comforting, booze-absorbing antidote to nighttime overindulgence — is pretty much everywhere. Sometimes it's a stellar rainy-day lunch.

That wasn't always so. When some unidentified Québécois cook invented the dish — in the late 1950s, somewhere between Montréal and Québec City in the region of Centre-du-Québec — poutine was an unclassy snack. Short-order cooks served it at bars, diners, rural ice arenas and other blue-collar outposts. It was rare outside of those areas, where many French-speaking Canadians lived in somewhat ghettoized isolation on the margins of greater Canadian society.

Along with Québécois culture at large, the dish was mocked by Anglo-Canadians as lowbrow, lesser, unhealthy and degenerate. Nicolas Fabien-Ouellet, a University of Vermont food systems graduate student, recalls that poutine was banned from his high school when he was growing up. According to Fabien-Ouellet's research, summarized in a paper called "Poutine Dynamics," the dish became a junk-food emblem of the francophone backwardness endemic to northeastern Canada.

But, by the late 1990s, poutine began popping up in hip restaurants in urban locales, where chefs embellished it with foie gras, lobster and other high-end ingredients. Its appeal broadened to English-speaking Canadians and then to Americans and consumers around the globe. In 2016, president Barack Obama's chefs served a version of the dish at a state dinner for Canadian Prime Minister Justin Trudeau.

Fabien-Ouellet's paper delineates poutine's path from such plebeian beginnings to the White House. He examines how, along the way, the dish acquired new social capital, evolving from a source of anti-Québécois stigma to a celebrated "Canadian" specialty.

He also points out, in no uncertain terms, that the "Canadization of poutine," as he calls it, amounts to cultural appropriation. When the world praises a once-stigmatized, distinctly Québécois food item as an aspect of "Canadian food culture, expression and ... national identity," Fabien-Ouellet argues, it does so "at the expense of the Québécois minority."

Last week, he presented his work at the Congress of the Humanities and Social Sciences in Toronto — and Canadian and American national press outlets, including the Huffington Post, stuck their forks into the debate. Via phone, Fabien-Ouellet took a few minutes to field questions on the dynamics surrounding poutine — social, historical, culinary and otherwise — from Seven Days.

SEVEN DAYS: What made you think of studying poutine as a means of cultural appropriation and assimilation?

NICOLAS FABIEN-OUELLET: When I came to UVM, people in Vermont — knowing I was from Montréal — were always asking me about poutine. Many restaurants in Burlington serve it, and the way people talk about it here isn't the way they talk about it in Québec. In Québec, it's a Québécois dish, and it would make no sense to anyone to call it otherwise. But here, people were labeling it as a Canadian dish.

SD: Why is that a problem?

SD: From the outside, it seems greater Canada has grown more open to Québec's cultural diversity.

NFO: This paper is really more about the Canadian culture than the Québécois culture. Canada is 150 years old this year, and there's this big celebration of the confederation of Canada. So, we're talking a lot about [national] identity, and [my] thesis is really more about what we're talking about when we talk about Canadian identity. Of course, it's correct to say that Québec is located in Canada. But should we stop talking about Québécois culture and only talk about Canadian culture?

SD: Do you think there's a risk of Québécois heritage becoming fully absorbed by Canadian culture?

NFO: That is a constant risk for any marginalized or minority group. In the past, assimilation [of Québécois culture into Canadian culture] was performed via shame-based policies and processes. Now, it seems like these processes of assimilation have shifted. It's become assimilation by appropriation.

SD: How do you feel about all the ways in which people have updated and adapted poutine?

NFO: It's wonderful! There's Greek poutine, chicken-curry poutine, Haitian poutine — you name it. The culture is hybridizing in new and interesting ways. Half of my paper is actually about how it is wonderful to adapt poutine.

Calling poutine a Canadian dish is not the same as when [Canadians or others] adapt the dish and appreciate its culture. I'm not claiming that food should have an ownership, but people are attaching false ownership to poutine, and that's problematic.

SD: What is one neat new spin on poutine you've tasted recently?

NFO: I'm really curious about the Asian poutine. I had a butter [curry] chicken poutine recently, and it was really good. It was in Montréal, but I don't recall the restaurant.

SD: Do you have a favorite poutine?

But if you like poutine with the cheese curd and brown gravy, the classical way, you need to be in an area where that curd is available. We have a lot of that in Québec. When we go to the gas station, there are cheese curds waiting for us.